The Milwaukee Bucks dropped their third straight game Saturday night, losing 105-100 to the Detroit Pistons. The Bucks had a chance to tie the game, but a botched shot from Brandon Jennings sealed the win for Detroit.

Sometimes, brevity says more about a game than an elaborate breakdown.

Playing on their home court Saturday night, the Milwaukee Bucks lost 105-100 to the Detroit Pistons. Like so many times this season, the Bucks dug themselves into an early double-digit hole.

They took a quarter and some change to catch up, pulling ahead going into the game's final quarter. However, Milwaukee relinquished a chance at victory when the team's biggest playmaking asset made a regrettable play when he was needed most.

Brandon Jennings. Quite a strange game from the Bucks' most important player, who registered an airball heard round the NBA minutes after keeping the game within reach. Jennings needed 26 shots to score 27 points, relying on three pointers (4-10 3fg) and free throws (6-6) to get to that point (4-17 on two point shots). Conversely, he was a crucial part of the Bucks' crunch-time offense, throwing consecutive (impressive) ally-oops to Samuel Dalembert over the final two minutes, and tallying seven total assists for the game.

Samuel Dalembert. With 14 points (5-10 fg) and 12 boards, Dalembert extended his double-double streak to three games. Overall, Sammy D has been an average fill-in for Larry Sanders, crashing the offensive glass (5 orbs), but closing much slower on penetrating guards and quick-moving big men. This does beg the question: If Dalembert continues to produce like a backup center, do the Bucks, who already lack girth up front, keep him through the trading deadline?

16, 0. The Pistons average 14.4 fast break points per game on the season. They eclipsed that in one quarter against the Bucks, and didn't add to it once over the final 36 minutes. Detroit's play recognition was admirable, routinely disrupting passing lanes and hedging on the roll. But for the most part, it was Milwaukee's own carelessness that opened the door for eight Piston steals and multiple lay-up opportunities.

"They're a fast starting team. This is not unusual for Detroit to come out and play like this," coach Jim Boylan said. "If you watch their games, they're a good starting team. We expected a good push from them early. We just turned the ball over. Some of the plays, you can't really even describe them. They were just bizarre kind of turnovers, and they took advantage."

-9.9%. Allowing a team to shoot 49.4% while shooting 39.5% yourself makes it incredibly hard to win games consistently in the NBA.

25-28. The Bucks connected on 25 free throws, which ranks as their second highest total this season. I bring this up because Corey Maggette, who now warms cushions on the Pistons, erroneously led us to believe free throws were the team's only barriers to playoff contention a couple years ago. Free throws are stats that take on a tertiary level of importance when bigger issues (size, defense, turnovers) flair up.

Jennings' three point shooting. 50% of Jennings' makes were three point baskets, including two in the corner. Over his past 10 games, Jennings has been a spitfire from beyond the arc, connecting on a career-high 43.3% of his three point attempts. The shot chart below makes me smile: 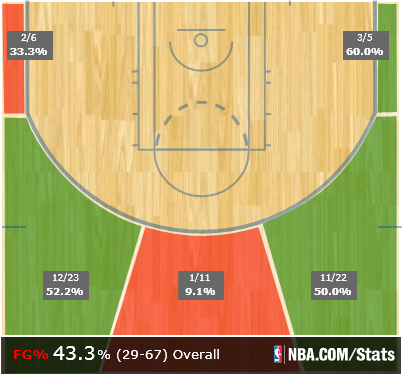 On a side note, feel free to revisit Behind The Buck Pass for the best and worst Bucks players from the 1990s.

Perspective. One regular season win over the Miami Heat means zilch when the Bucks take the court a day or two days later. Likewise, a single loss to a Pistons team that has routinely body-slammed the Bucks into submission says nothing about how the team will respond Monday against the Washington Wizards, Wednesday against the Philadelphia 76ers, and beyond.

Jennings' finishing problem. The Bucks' enigmatic point guard finished 2-11 in the restricted area, and continues to struggle at the rim. Whether floating in a runner or quickly releasing a tear-drop around the rim, Jennings can never consistently get these supposedly easy shots to fall. Over his previous 10 games, Jennings has hit 35.6% of his shots within 9 feet of the cup. Yeesh.

Defending Jose Calderon. The newly acquired point guard turned in an advanced stat geek's wet dream (23 pts, 10-13 fg, 3-4 3fg, 10 asts, 5 rbs, 3 stls, 3 TOs). There were a few stretches where Luc Richard Mbah a Moute and Mike Dunleavy kept Calderon quiet, but he was still penetrating enough to get Charlie Villanueva a solid look from beyond the arc on the game-sealing possession.

"At first we were letting Calderon's defender slide under the screen, but Jose was playing really well, shooting the ball well, so we decided that we would jump out a little bit more," Boylan said. "Try to be more aggressive. There were a couple occasions where there was a bit of miscommunication, but I thought after a certain amount of time, especially when we had Luc on him for a while, we tightened up a little bit."

Last possessions. Coach Boylan, on the team's final play (a 31 foot desperation heave from Jennings with three seconds remaining on the game clock):

"I think he was thinking that they were going to foul him. They were up three, time was running out, we were coming over half court. Lawrence (Frank) was up yelling for them to foul," Boyland said. "I didn't have a great angle on it ... But I think he was thinking they were going to foul him and he would be in the act of shooting if they did that. It didn't happen, and he took that shot, and that was it."