The Milwaukee Bucks return home Saturday night to take on the Orlando Magic, who are in full-on rebuilding mode and have lost eight straight games. I smell a seller at the trading deadline...

On the Magic: Orlando Pinstriped | Magic Basketball | Howard The Dunk

Magic update. This is what rebuilding looks like. Running up a 2-12 record in January, Orlando finished the month last in fouls drawn, steals and blocks, second to last in free throws, 26th in rebounds, and extended a season-long losing streak to eight games last night. The Magic also rank last in the NBA in points scored on the second night of back-to-backs (86.8 ppg), and are 2-4 in those games. Arron Afflalo leads Orlando on points scored, with JJ Redick a close second. In short, the Magic are guaranteed to be sellers at the trading deadline. Personally, I'm a fan of their leading scorers as role players . Make it happen, Mr. Hammond.

Tonight we're gonna party like it's 1996-97. Tonight we're gonna party like it's 1996-97. Tonight marks the second of 10 games where the Milwaukee Bucks will wear the 1990s alternate "Action Deer" jerseys, and the first at the BMO Harris Bradley Center. If you haven't done so already, check out Brew Hoop expatriate Alex Boeder's column on the "so ugly, they're beautiful" jerseys that perfectly classified a transitional era in Bucks history. 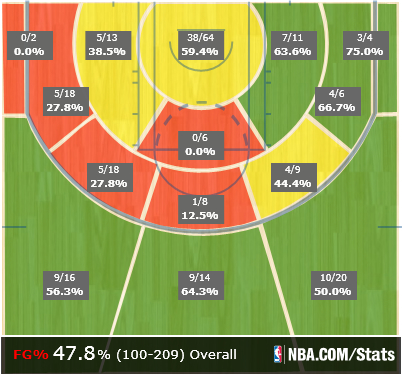 I keep picturing Ilyasova running around the perimeter and stepping back as the defense collapses. And nobody's around - nobody on defense, I mean - except me. And I'm standing on the edge of the arc. What I have to do, I have to catch Ilyasova if he starts moving into the mid-range area. That's all I do all day. I'd just be a catcher in the rye and all. I know it's crazy, but I feel like that's the only thing that guarantees Ersan's shot will keep falling.

How could you be Mo Harkless? Seriously, that never gets old.