The Milwaukee Bucks have built up a five-game lead over the Toronto Raptors in the NBA standings, but will it be enough?

Share All sharing options for: NBA Playoff Standings and Odds 2013: Bucks trying to hold off Raptors and catch Celtics

Monta Ellis and the Milwaukee Bucks finally stopped the bleeding by knocking off the Dallas Mavericks in a frantic 95-90 road win on Tuesday night in Texas, but the team isn't out of the woods yet. Less than one month ago the Bucks had moved five games over .500 and things looked great. Their playoff odds in the Eastern Conference spiked at 97 percent near the end of January, but a recent stretch of nine losses in 12 games has served to breathe life into the surging Toronto Raptors.

Of course, I've bastardized the concept of a surge by invoking it in the context of a nine-team race for eight playoff spots in the East. The Raptors have no business in the conversation after their 4-18 start to the year, but here we are heading to March and we're unable to discount them completely. That's a partial indictment of the Bucks and a partial doff of my chapeau to Toronto.

Things have finally turned for the team up north. They've navigated a tough spot in the schedule by pulling out six wins in the last eight games, and now Rudy Gay and company are primed to move into the eighth seed race if the Bucks slip up this week.

Both teams own a negative efficiency differential, which means they are unique and distinguished members in the NBA playoff discussion. Somebody will falter down the stretch, because each squad has more experience with heartbreak than success this year. Toronto is still 11 games under .500, after all.

I'd love to focus on catching the Celtics, but it's probably best to wait for the Bucks to string a few wins together first. For now, here's a breakdown of upcoming schedules, statistics and standings and playoff odds for the Eastern Conference... 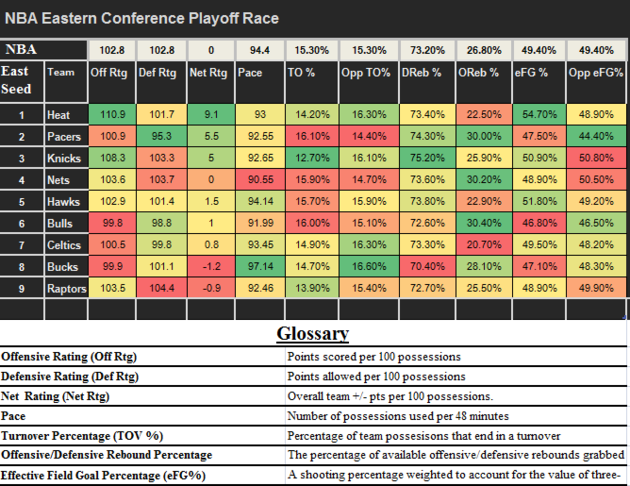 Here is a look at the current standings, along with updated playoff odds from ESPN and Basketball-Reference.