Monta Ellis, Brandon Jennings, J.J. Redick and the new arithmetic of the Bucks

The Milwaukee Bucks have looked like a different team since J.J. Redick arrived on the scene. Monta Ellis and Brandon Jennings have both changed their games, but they've taken very different paths to do so.

Share All sharing options for: Monta Ellis, Brandon Jennings, J.J. Redick and the new arithmetic of the Bucks

To borrow a turn of phrase from former NBA player and current Grantland contributor Jalen Rose, everyone is here to either add, subtract, multiply or divide. He was referring to the dynamics in NBA entourages, but I think it applies to the Bucks in this moment. John Hammond made a bold move before the trade deadline to bring J.J. Redick together with Brandon Jennings and Monta Ellis for the stretch run, and so far the result have been mixed. Hammond came to add, Ellis and Redick have multiplied, but Jennings has seemed to subtract and divide from the best moments for the Bucks.

Spectacular wins over the Mavericks and Rockets now burn brightly in our minds as signals of hope that the team's modest mission can be fulfilled during remainder of the season. The Bucks have outscored opponents by 2.4 pts / 100 poss in the initial trio of games with Redick (101.6 ORTG, 99.2 DRTG, 53.1 TS%), and all of their numbers are improved from the norms (100.0 ORTG, 101.1 DRTG, 50.8 TS%). The three-game sample isn't a reliable statistical signpost, but things certainly do feel different.

Redick will be a nice addition, but he has deserved more than the 65 minutes he has received. Before this issue can be addressed, it's important to set the stage by addressing the two players who have been soaking up his extra time on the floor.

I had never really considered it, but maybe Jennings was the one who was holding Ellis back, and not the other way around.

Ellis always struck me as a player that couldn't help but subtract from success, but he's changed my mind recently. The infusion of shooting talent has stretched defensive schemes and pulled apart perimeter defenders to open new lanes for Monta to attack. He's basically been the same mediocre scorer over the past three contests (50.0 TS%), but his overall impact has been more arithmetically significant.

A crisp 3.56 assist-to-turnover ratio (32 assists, nine turnovers) over that span highlights Ellis' unmatched ability to multiply the talents of supporting players on the roster. He's creating things for his teammates in ways other guys on the roster simply can't. He's slicing. He's dicing. Sure, he's also still taking ill-advised mid-range jumpers and clanking threes, but Ellis has never felt more valuable to the Bucks. He's the undisputed leader of this team right now. The Bucks needed big moments from him during their road trip in Texas, and he delivered so many times that this game-winner in Houston doesn't even do his full efforts justice.

In the heat of this moment, it sure feels like Brandon Jennings is here to divide. None of his recent quotes are inspiring. His interest level may now be lower than his shooting percentage. He's always been streaky, but there's an sneaky element of disinterest that conjures up bad memories of the emo-Jennings shat show that ripped through Milwaukee in the wake of the All-Star Game last season.

John Hammond called for sacrifices to be made in the pursuit of a larger goal immediate after he made the move to bring Redick to Milwaukee (via JS-Online):

The GM laid out the blueprint for addition by subtraction. His thinking was perfectly sound, and the statistics probably back up his theory. Jennings and Ellis have played huge minutes this season. As shooters log extensive minutes they may lose their ability to hit outside shots at a normal clip. Henry Abbott of ESPN explored the issue of tired legs for three-point shooters back in January, and here's a bit of what he found:

In a nutshell: In their first 25 minutes on the court, NBA players shoot 3s consistently, in a tiny, and productive range from 35.6 to 36.8 percent.

As they keep playing, that percentage drops.

By the time we're talking about players who have logged 41-45 minutes their percentage is all the way down to a pedestrian 27.9 percent ... which is bad. That's down around the territory where you'd rather those guys just don't attempt those magically productive 3s.

[Image comes from the same story, with stats via the NBA Stats Cube] 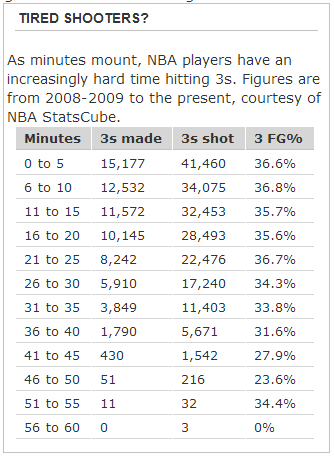 Some caveats apply with this data (it lacks controls that would help isolate trends in consistent player populations), and Abbott made those caveats in his own work, but the general concept makes sense. In a perfect world It's addition by subtraction: take away a few of those grindy late-game minutes per night and it can make a difference in shooting percentages on deep shots. Brandon Jennings is exactly the type of player who could benefit from seeing fewer minutes on the floor.

Of course, this idea hasn't occurred to Brandon. He hasn't even considered the possibility. Here's what he told JS-Online after news of the Redick trade broke:

His total lack of self-awareness shouldn't surprise us at this point (read: SWAG). However, the way his lack of interest in the experiment has manifested on the floor is troubling. While Monta Ellis has never felt more valuable to the Bucks, Jennings has never felt more dispensable. A golden opportunity to re-invent his game has been handed to the 23-year-old centerpiece of the franchise, and yet he appears more interested in posturing for restricted free agency than snatching up his best chance to become a better pro in Milwaukee.

The recent crater in Jennings' play is enough to turn any Bucks fan into a cynic, but I want to note that late on Wednesday night he posted a heartfelt message to his aunt who apparently passed away recently. He mentioned "cancer suucks" in subsequent message. Both Twitter posts were deleted from his account early on Thursday morning, for reasons unknown. It's also still important to remember that BJ personally benefits more from quality play the stretch. Even if he wants to leave, he can only drive up his price by playing well.

Nevertheless, he can' seem to get out of his own way. Prior to the big game in Dallas on Tuesday he had this to say about the Mavericks, a potential suitor in restricted free agency this summer (via DallasNews.com):

"Yeah, of course," Jennings said when asked if he could see himself fitting in Dallas. "You've got Dirk Nowitzki, you've got O.J. Mayo, Elton Brand, Chris Kaman.

"Who wouldn't want to play in an environment like this every night? You've got an owner who's so into his team and everything like that. Every time you see the Mavs, you see him cheering or going crazy. They won a championship. They're about winning."

The whole situation is deliciously ironic. It's not just that he got all rhetorical about the excitement of playing in front of the crowd in Dallas and proceeded to offer up a truly semi-pro-caliber effort on the same night during an extremely important game for a team in better position to compete for a playoff berth. It's not even that three of the four Mavericks players he mentioned will become free agents this summer -- seriously though, CHRIS KAMAN?? -- or that the Bucks have established a more feasible long-term plan.

What makes it so ironic (beyond the fact that the Bucks say they will match any offer in restricted free agency) is that Jennings has a terrific opportunity to be a part of winning right now; to make the Milwaukee Bucks "about winning" right damn now, but he can't seem to get his head on straight long enough to notice there is still work to be done. There's no way around it. He can't shirk his responsibility to make the Redick situation work as well as it can. He's either here to either add, subtract, multiply or divide, and everyone is carefully watching what he chooses to do. Leaders tend to make the most of these opportunities:

Monta Ellis is the undisputed leader of this team. That's what I learned tonight. Hell of a game from him.

March will be a better month for me. #BelieveDAT