Tobias Harris has posted some gaudy numbers since joining the Orlando Magic, but it's not time for Milwaukee Bucks fans to panic just yet. Here's why.

Don't look at the stat lines Tobias Harris has posted as a member of the Orlando Magic. Don't do it, Bucks fans. It'll make you sad and angry. But that's not why you shouldn't look. It's because you may not know what you're actually seeing.

If you want to live a long and happy life as an NBA fan, you need to develop a firm set of rules to help you digest the ups and downs of each season (and each off-season). Here are a couple rules I live by that are relevant to this discussion: (1) If your team selects a prospect with a double-digit pick, he is probably less important in the NBA landscape than you think he is, and (2) never EVER trust anything that happens during garbage time in NBA games.

The recent surge from Tobias Harris has forced me to rely on my rule system to keep me sane. A run of 53 points on 21-31 shooting (73.9 TS%) in 86 minutes of action will do that to me, I guess. It's a small sample, but it's a really impressive small sample. I admit it: I've been scoreboard watching. Here are the early returns, via NBA.com/stats: 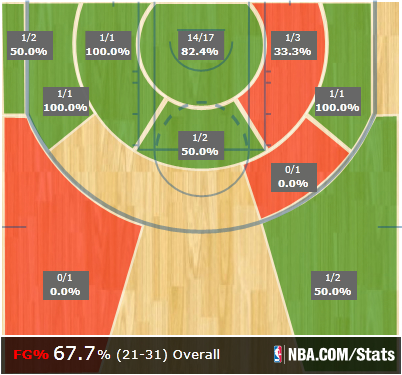 Looks awesome, right? Now let's calm down and apply our set of rules.

Rule 1 Application: As the No. 19 pick in the 2011 NBA Draft, I constantly have to remind myself that the odds are against him in terms of turning into an impact player in the NBA. Yes he's only 20 years old, but his youth would have pushed him higher in the draft if he was a true blue chip talent. He's always been more of a fringe prospect. A low-risk experiment that John Hammond initiated and later aborted when the chance to land J.J. Redick emerged. The most reasonable assumption we can make is that he's nothing special as an NBA player. Then again, he just exploded for a career-high 23 points on 9-12 shooting on Wednesday night against the Sacramento Kings. That's where Rule 2 comes in.

Rule 2 Application: The Orlando Magic are an awful team. When the Bucks are busy grinding out close games and clawing back from early deficits, the Magic are usually down 15+ points, riding out yet another sleepy loss in NBA obscurity. It's not just that they've dropped 18 of their last 20 games, it's the way they've failed. Orlando has lost two of their three games with Tobias Harris on the team, both by 20+ points. Guess what that means? Garbage time.

Harris has played 86 minutes for the Magic. Here's the breakdown: 39 of those minutes have come with Orlando down by double digits -- including 24 with Orlando down by 20 points or more. In garbage time teams expand their rotations, tap into bench talent and focus on running down the clock while trading baskets. The game is already over, at least as far as true wins and losses are concerned. It's still basketball, but it's not competitive in the same way because the incentives change and the best talent usually observes the action from the bench with a Gatorade bottle in hand.

As it turns out, Harris has propped up his production during garbage time. He's 11-13 from the field with Orlando down 20+ points, which means he's 10-18 in more high-leverage situations. If his efficiency at the rim popped out when you first looked at his shot chart, remember that top-notch defense doesn't usually carry over to a blowout scenario.

There's another side to the garbage time dynamics as well. Losing teams tend to care less about fundamental mistakes, and defensive deficiencies don't matter quite as much when the game is no longer on the line. Harris couldn't stay on the court in Milwaukee because he couldn't defend. In Orlando he's somehow managed to be even worse on defense so far.

Thru three games, the Magic have been outscored by 12.5 pts / 100 poss with Harris on the floor. Their 108.0 defensive efficiency jumps to 113.2 pts allowed / 100 poss when he's in the game. Al Harrington, Doron Lamb and Beno Udrih are the only players with a higher (worse) defensive efficiency tagged to their name. The average NBA efficiency is 102.8 pts / 100 poss, so keep that in mind when you look at some of the defensive numbers -- and even the offensive numbers -- linked to Harris during his time with Orlando (via NBA.com/stats):

Don't believe the hype. At least not yet. Tobias Harris hasn't drastically changed since leaving Milwaukee. He's just seeing more chances play in garbage time with his new team on the wrong side of blowouts.

The Bucks have no space for garbage time right now. J.J. Redick is on board and the team is primed to make a playoff push that they hope will rival the excitement and execution from the Fear the Deer season. Don't worry about Tobias Harris right now. He's still a mid-round project with plenty of questions about his ability to hang with top talent on the defensive end and score effectively against starting talent.

We'll let you know if things drastically change. Enjoy the fruits of the J.J. Redick trade in the meantime.