Brandon Jennings has been spectacular in his last four games, and on Sunday night he and Bucks will try for their sixth win in the past seven games.

On the Kings: Sactown Royalty | Cowbell Kingdom | A Royal Pain

The Bucks (31-29) will try for their sixth win in seven games on Sunday night (8 p.m. CT tip) when they take on the Kings (22-42) at Sleep Train Arena in Sacramento. The Kings have lost nine of their last 12 contests, but they've pushed the pace in many of those contests. Sacramento scored 100+ points in 10 of those games and 110+ points in five matchups over that span, so Brandon Jennings, Monta Ellis and J.J. Redick should have plenty of opportunities to get out in the open floor and run.

While Ellis' improved all-around play deservedly earned him player of the week honors a week ago, Jennings has been truly spectacular over the past four games. It's only four games, but his shot selection has drastically improved recently. He's taking less shots overall, and he's eliminating the off-balance jumpers and wild layups that have dragged down his shooting percentages since he joined the league. Now the plan seems to be: (1) shoot threes, (2) press the defense and create for teammates when opponents run him off the arc and (3) take shots inside the arc only when easy opportunities arise. I love this new plan.

In the past four games, Jennings has taken 54 shots and dished out 58 assists (to just 12 turnovers). He's hit 57.1 percent of his threes (16-28), and that won't last, but it's still a good plan to eliminate his worst shots and focus on the ones that give the team an extra point if he makes them. We've never really seen Brandon articulate a true plan on the floor, so this is exciting stuff.

In case you want to know what 68.0 percent true shooting looks like, here's his shot chart for that stretch (via NBA.com/stats): 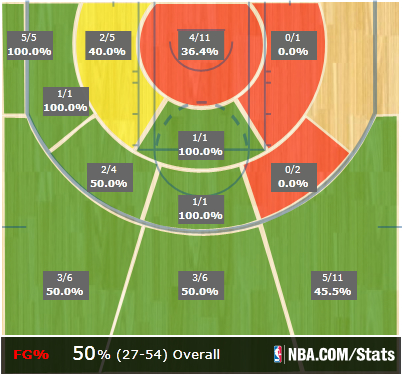 The most important fact to me is that over 50 percent of his shot attempts have come from beyond the arc. As the saying goes (I think): if you can't beat 'em, get smarter and find a find a way to beat 'em by doing things you're good at and avoiding things you aren't good at. Anyways, here's a look at his distribution of shot attempts for those four games: 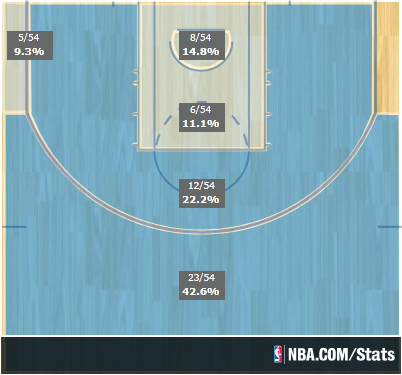 If this seems like a Brandon Jennings love fest, it's because it is. This is a Brandon Jennings worth loving, which is what we've all been waiting for. This trend may collapse and he may revert to his old ways if the threes aren't going in at such a high clip, but for now we can have fun with the whole thing. Our emotional investment in Jennings has been exhausting for nearly four years, so we might as well get some joy out of it when things are going the way we've always wanted them to go:

I don't care why he's doing it, because if Brandon Jennings keeps up his new commitment to playing winning basketball, everyone benefits

Of course, there's an interesting back drop to this sudden renaissance. Jennings recently warned the Bucks that if he doesn't find an offer he likes in restricted free agency this summer, he would be willing to take the qualifying offer and leave Milwaukee as an unrestricted free agent in 2014. I discussed this issue at length on Friday:

The Bucks can offer Jennings more money ( ~$83M vs. ~$60M) and more years (5 vs. 4) than any other team, so if it's about the green stuff, Milwaukee is in the best position to satiate the former first-round pick.

Three other point guards from his draft class -- Jrue Holiday (4yr, $41M), Steph Curry (4yr, $44M) and Ty Lawson (4yr, $48M) -- signed early extensions before the Oct. 31 deadline. Brandon reportedly turned down a four-year, $40 million offer from John Hammond and the Bucks before the start of the season. As for other NBA teams that have: (a) a clear need for a PG and (b) the cap space to make a max-type offer, the list probably only includes the Dallas Mavericks, Orlando Magic, Atlanta Hawks and Utah Jazz.

In restricted free agency, Brandon and his *new agent can shop for offers from other teams after the season, but Milwaukee has the right to match any offer sheet he signs *(recall that he dropped long-time agent Bill Duffy in early February and switched to Jeff Schwartz). He could otherwise choose to sign a one-year, $4.5 million qualifying offer and become an unrestricted free agent after the 2013-14 season, but only 14 NBA players in his situation have ever done that, and none of them were very good.

On Sunday Jennings will face off against the other big-name guard from his draft class who didn't reach a deal before the early extension deadline: Tyreke Evans. The No. 4 overall pick from the 2009 NBA Draft has also stepped up his game this season in search of a lucrative long-term deal.

Evans is shooting a career-high 47.4 percent from the field, a career-high 37.2 percent from beyond the arc and posting career-highs in effective field goal percentage (50.3% eFG) and true shooting (55.6% TS). His 15.3 points per game is the lowest total of his career, but he's operating with a better plan on the court and focusing on his strengths to boost the value of his game. Hooray for smart basketball!

Here's a rough chop comparison of Jennings and Evans to get you in the mood for the game tonight.

Bucks vs. Kings: Milwaukee escapes, Monta and Brandon get help from...Ayon and Udoh?