Monta Ellis has been stuck in a cycle of bad decision making and spotty defense for most of his NBA career. His penchant for off-balance jumpers has made him more frustrating to his own team than to opponents, even though he can look unstoppable when the mid-range shots are falling. The 27-year-old guard has all the physical talent in the world, but over time things haven't turned out well when his teams have chosen to put the ball in his hands. That inescapable tension is what turned Monta's confident comparison to Dwyane Wade -- "Monta Ellis have it all" -- into a potent Internet meme during the same week that he earned Eastern Conference Player of the Week honors.

It's a sad story, really. Ellis doesn't generate value like D-Wade does, but he only has himself to blame. Bucks fans know the deal by now. In 21 games with Milwaukee last year, he posted the lowest shooting percentage (43.2% FG), effective field goal percentage (44.9% eFG) and true shooting percentage (49.3% TS) since his rookie season. All of those numbers have dropped to even lower levels in the 2012-13 campaign. Ouch.

I was taking too many jump shots, I was settling. I wasn't driving like I used to. I'm just trying to get back in to it and like I said, picking my spots and take the drive and dishing off to the big guys.-Monta Ellis (via FSN-WI)

But wait! Anyone who points out Monta's crippling inefficiency is always met with this response: "look at his numbers in the 2007-08 season (53.1% FG, 53.6% eFG, 58.0% TS). He can still tap into that efficient scoring model under the right circumstances." Well, maybe that time is now. On Feb. 28 I wrote about the essence of Ellis' transformation:

Ellis always struck me as a player that couldn't help but subtract from success, but he's changed my mind recently. The infusion of shooting talent has stretched defensive schemes and pulled apart perimeter defenders to open new lanes for Monta to attack. He's basically been the same mediocre scorer over the past three contests (50.0 TS%), but his overall impact has been more arithmetically significant.

...He's creating things for his teammates in ways other guys on the roster simply can't. He's slicing. He's dicing. Sure, he's also still taking ill-advised mid-range jumpers and clanking threes, but Ellis has never felt more valuable to the Bucks. He's the undisputed leader of this team right now.

Since then Ellis has only improved his production. He racked up another Eastern Conference Player of the Week Award. He nailed a game-winner against the Houston Rockets. He dropped 34 points and nine assists against the Mavericks. He scored 34 points in an overtime win against the Jazz. Then he scored more fourth-quarter points than any other NBA player this year by pouring in 25 of his 39 points in the final period against the Orlando Magic. Here are his splits for before and after the trade deadline (via NBA.com/stats): 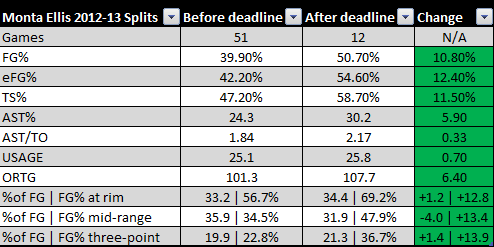 Less mid-range shots, more attempts at the rim, more three-point attempts and burst of brilliant passing? Hell yes, Monta Ellis. But I'm not here to impose a reductive statistical narrative on his transformation. I'm merely here to confirm that he's succeeded so far at reshaping his game to help the team.

Ellis has been vocal about his desire to change in recent weeks, which may be the most exciting news of all; he's actively trying to make this shift. It started with a simple statement he made after the win over the Rockets about playing point guard when Brandon Jennings is off the floor (via JS-Online):

It was enough to pique my interest, because when Monta is streaking to the rim to finish or dish to teammates, he's pretty damn good. Then Ellis crystallized the nature of his philosophical shift in an interview with Andrew Gruman of FOX Sports Wisconsin:

"[Shot selection is] one thing I did evaluate when I went back home for the (All-Star) break. I was taking too many jump shots, I was settling. I wasn't driving like I used to. I'm just trying to get back in to it and like I said, picking my spots and take the drive and dishing off to the big guys. Larry and those guys, when they are dunking and making shots down there, you are either going to get me or you are going to stay on him.

"J.J., Mike (Dunleavy), Brandon (Jennings), Ersan (Ilyasova) coming in and hitting shots, and it opens the floor up. If we do that as a team, it's hard for any team to guard us. I'm just taking what the defense gives me."

That quote made sweet, sweet love to my basketball sensibilities, because I knew the numbers were there to back it up this time. Monta Ellis may not have it all, but he's trying to change that. For now, he definitely has something worth talking about.

Monta Ellis before the trade deadline 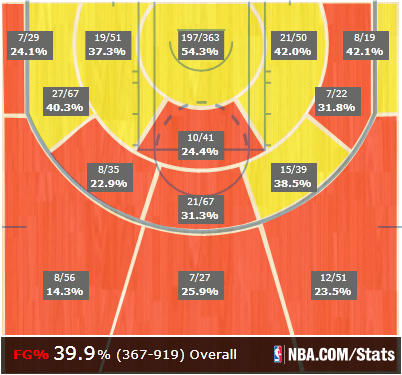 Monta Ellis after the trade deadline 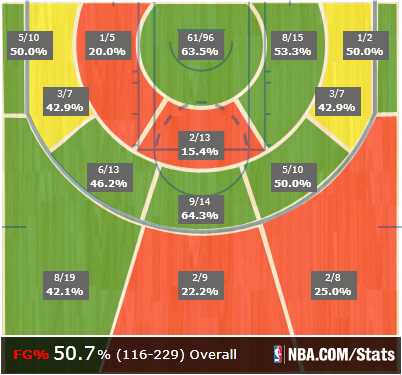