The playoff race in the Eastern Conference is getting messy. Get up-to-date on the tiebreakers, standings and remaining schedules right here.

Milwaukee Bucks fans: circle March 20, March 24 and April 12 on your calendar. Those are the biggest dates left on the 2012-13 NBA schedule for the Bucks. All three games are head-to-head matchups against the (current) No. 5 seed Atlanta Hawks, and wins on those days could make the difference between the No. 7 seed and the dreaded No. 8 seed.

Milwaukee currently sits 2.0 games behind the Boston Celtics and Chicago Bulls in the standings. They hold the head-to-head tiebreaker over the Celtics, but after splitting their season series with the Bulls that tiebreaker goes to conference record (where the Bulls hold the advantage). The Bucks not only need wins, they need to earn another tiebreaker to give them a better chance at avoiding the Miami Heat. There isn't much time left to make up ground against the Hawks, Bulls and Celtics, and it will be difficult to make any progress because Milwaukee plays the toughest schedule down the stretch among that quartet of teams.

It's scoreboard watching season in the NBA, so to help with that process I've created a few simple graphics to show current standings, tiebreaker statuses and remaining schedules for the 2013 NBA Playoff teams in the Eastern Conference bracket. Take a look at the landscape and let us know what you see. 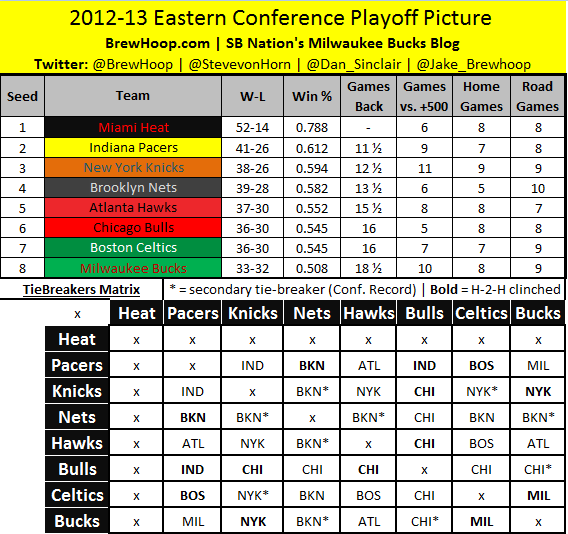 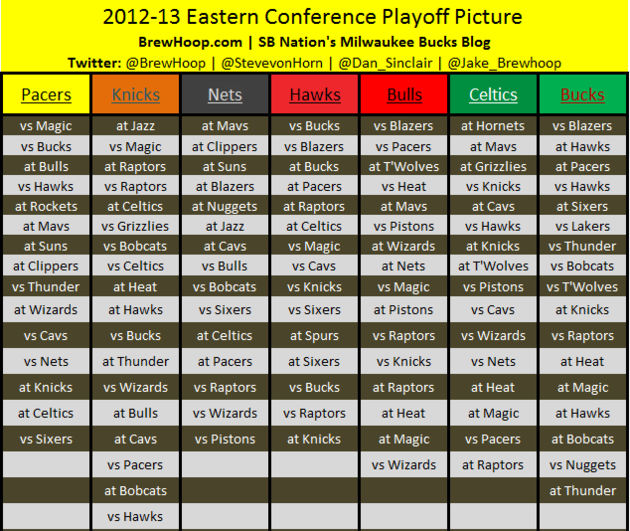