Here is the lastest breakdown of the 2012-13 NBA playoff standings, schedules and tiebreakers in the Eastern Conference.

If you're looking for excitement down the stretch of the 2012-13 NBA season, the Eastern Conference playoff race will probably have you covered. The No. 4 Brooklyn Nets are just 2.5 games ahead of the No. 7 seed Boston Celtics, and the No. 3 New York Knicks are dealing with injuries to Tyson Chandler and Carmelo Anthony as they stare down a difficult finish to their schedule.

After the Milwaukee Bucks nearly squandered a 27-point lead against the Portland Trail Blazers on Tuesday night, on the brink of a huge game against the Atlanta Hawks no less, I've decided to break down the remaining schedules for each playoff team in a more complete way. Now the schedules are color-coded to include back-to-backs and to identify the third game in four nights for each team. The analysis produced some interesting results.

The Knicks have the most games against +.500 teams (10), and it turns out that eight of their final 17 games will be either the second game of a back-to-back or the third game in four nights, or both. With their injury issues, the Knicks should be concerned about a poor finish undermining their playoff seed.

The Bucks are also in a bit of trouble. Monta Ellis, Brandon Jennings and Larry Sanders have logged big minutes in recent weeks -- because the Bucks have played a ton of close games -- and two of their three huge games against the Hawks come on either the second of a back-to-back or the third game in four nights, while the Hawks will be rested in both cases. If the Bucks want to avoid the Heat, they probably need to take all three games from the Hawks to earn the head-to-head tiebreaker and gain ground on Atlanta. 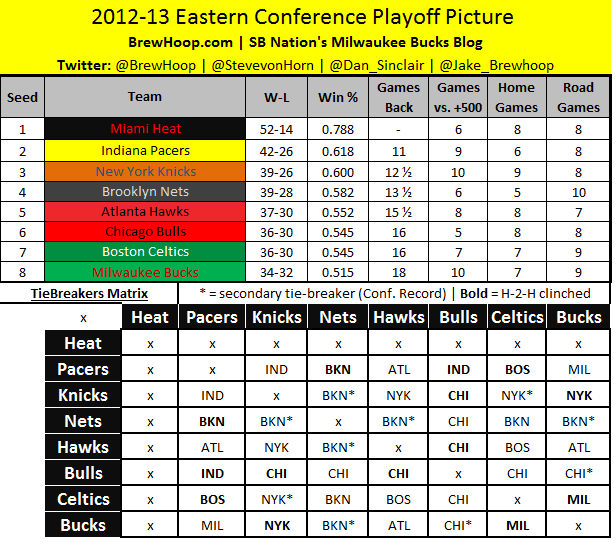 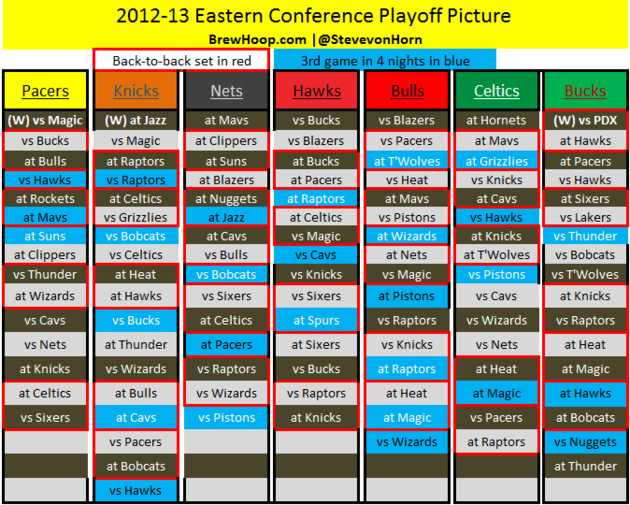