The Bucks were tired of the upsets that rocked the NCAA Tournament on Friday, apparently. Milwaukee used Wisconsin's shooting performance (15-59, 25.4% FGs) as inspiration from the upset special starring No. 12 seed Ole Miss, but they shifted the burden of bad offense (31-101, 30.7% FGs) to the underdog team in their matchup against the No. 2 seed Indiana Pacers to add to the misery of basketball fans in the state of Wisconsin (special March Sadness note: somebody broke bad on Bo Ryan after the game and altered his Wikipedia page).

Everything about the game was weird, except for the outcome. Monta Ellis came into the contest battling an illness, but it hardly turned into the mythical Monta Ellis Flu Game we all secretly wanted.

Boylan rode Ellis for 37 minutes and Monta finished with a team-high 22 points on 9-22 shooting and six assists. It's not a great line, until you consider that Brandon Jennings went 1-15 from the field and J.J. Redick clanged his way to a 1-11 night.

The first half featured 21 combined shot attempts from Larry Sanders and Samuel Dalembert, and unsurprisingly the team shot just 20-55 (36.4%) as a team over that span. Those two did save the Bucks from early embarrassment, however, as they conspired to corral 11 of Milwaukee's first 15 offensive rebounds (of 22 total OREB) as part of a dominant performance on the glass. They made snow angels in the avalanche of missed shots. Then Larry Sanders decided to pee in the snow.

Larry Sanders with more blocks (2) than ejections (1) tonight. But he did tie the all-time NBA record for technical fouls in a game again :(

The Bucks started the second half 1-8 and then Larry didn't like a foul call on the defensive end and he was slapped with two quick technical fouls to send him to the locker room with 7:54 remaining in the third period. I had planned on sitting on this GIF because I love Larry, but since he decided to let his temper get the best of him (again!) I'm just going to drop this Paul George dunk from the first half right here:

The Bucks simply imploded after halftime, as they proceded to match their season-low for points in a quarter in the third period en route to a season-low scoring night. 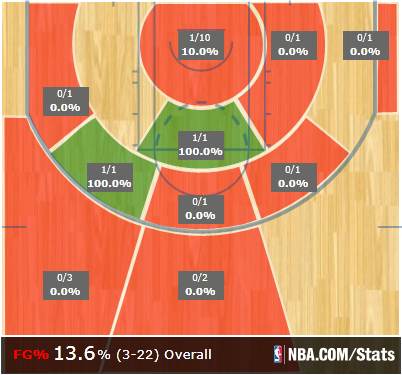 Mike Dunleavy then added to the misery by slapping down on Gerald Green's head for a hard foul that got upgraded to a flagrant-2 upon review, and he presumably joined Larry in the locker room after his early disqualification.

Danny Granger and David West did not play for the Pacers, but Paul George carried Granger's load (20 points, 7-15 shooting, eight rebounds, six assists) and Tyler Hansbrough filled in for West with 22 points and 12 rebounds.

It was yet another setback for a Bucks team that should be trying to avoid the Miami Heat in the first round of the NBA playoffs. Another conference loss is bad news for the secondary tiebreakers with the Bulls and (potentially) the Hawks.

The FSN-WI crew wondered after the game whether a matchup with the Pacers would be any better than one with the Heat. The conversation failed to provide me with any comfort, but it did bring me some clarity on an otherwise disastrous day of hoops.

Some teams are just destined to be one-and-done.