After weathering a few early Dwight Howard dunks, the Milwaukee Bucks settled into a groove, beating the Los Angeles Lakers 113-103 on Thursday night to snap a four-game losing streak.

It always feels good to beat the Los Angeles Lakers, doesn't it?

On Thursday night, the Milwaukee Bucks snapped their four game losing streak, beating the Lakers 113-103. From about halfway through the second quarter on to the final buzzer, Los Angeles looked every bit the part of the Western Conference Methuselah. They struggled to recover on pick-and-rolls, failed to match the Bucks' energy on the glass, and made the Bucks' look like the Houston Rockets in transition.

Beating the Lakers certainly isn't what it used to be (along the same vein of the Boston Celtics), but playing in front of a mostly purple and gold crowd, the Bucks starters turned in their best collaborative effort of the season.

"We did a really nice job defensively on a main part of their game, and that is taking away some of those easy baskets that (Dwight) Howard gets. It was one of our better games recently," coach Jim Boylan said. "It's something for us to build on. They're a big team, they play a certain style, and they try to pound it inside if they can. ...but i thought our attention to detail was a little bit better.

Not 24 hours ago, we were talking about the locker room shrapnel exploding from Brandon Jennings' post-game comments Wednesday night. It's amazing how quickly a narrative changes game-to-game. Of this, the Bucks are seasoned veterans.

Larry Sanders. We pay constant homage to Sanders' defense, but it was his offense that propelled Milwaukee to their first victory in over a week. Scoring 20+ points for the first time in his career, Sanders dove hard off pick and rolls, registered between five and 500 dunks, had nary a complaint about the occasional suspect call from the referees, and tallied his ninth double-double in 10 games.

Marquis Daniels. Tasked with defending Kobe Bryant (30 pts, 6-17 fg, 18-20 ft, 3 asts, 2 rbs, 6 to), Daniels was inevitably on the receiving end of ref whistles, often dispelling that energy with frenetic pacing and jersey chewing after each call. However, when Kobe pushed, Daniels pushed back harder, and it was frustrating enough for the Lakers' impending all-time leading scorer that over half of his points had to come from charitable donations. Daniels was also solid in spurts on offense, hitting a big three during Milwaukee's third quarter comeback and executing a fourth quarter dagger of a wraparound lay-in that defied physics and drew a foul.

"Marquis has been playing really well, Obviously tonight you saw what he can bring to the table for you, from a defensive standpoint. He made some plays, made some shots," Boylan said. "I thought it was the difference in the game for us, trying to keep Kobe in check, as much as you can keep him in check. Marquis made him work. He's got a big body, strong, he leans on him, so it was a great effort by him."

Brandon Jennings. After the world collapsed on the Bucks' enigmatic point guard, Jennings bounced back with a solid game, connecting on a couple essential second-half three pointers that either gave Milwaukee a lead or extended it. More noteworthy, he did not play the game's final six minutes. There is a logical explanation though:

"Brandon played great tonight. I took him out. I had every intention of putting Brandon back in the game. But the game started to roll in our favor, and I didn't want to mess with the chemistry we had out on the court," Boylan said. "Not that I didn't trust Brandon to come out and play well. ... I just felt our matchups were good, the guys were kind of in a groove, nobody was fatigued, nobody had played too long. So, it was just an unfortunate thing that he didn't get back in."

8. For some reason, Monta Ellis just gets buckets in the fourth quarter. With his eight points on 4-7 shots against the Lakers, Ellis is averaging 56.5% shooting overall and 54.5% on threes in the fourth over his last five games.

30. Transition scoring is fun when you have the personnel for leak-outs and quick shots; and you're facing an opponent with heavy legs. In particular, this game featured a lot of highlights, including Ersan Ilyasova's perfectly placed full court, Hail Mary pass to Monta Ellis for a lay-in, a couple steals and open court dunks from Daniels and Ellis, and Jennings' patented fake behind the back pass-to-quick dump off.

Kobe Jerseys. We counted roughly 12 different variations of #8 and #24. That's not including the Hong Kong specials.

Tired? The Lakers have yet to win both ends of a back-to-back this season. That has something to do with their age (Steve Nash didn't play the final six minutes of this game) and the fact that they haven't put together those expected sustained runs of brilliance. It doesn't cheapen the win, but it puts it into a semi-sobering perspective.

Thunder Rolling In. It's Friday, and you've got an obligation to get down. We'll worry about Saturday on Saturday.

Fourth quarter. In their last two games (against the Atlanta Hawks and Phialdelphia 76ers), the Bucks shot 34.6% and 31.6% from the field in the final quarter, respectively. But against the Lakers, a team that has the game's best center calling shots in the paint and a renowned closer, the Bucks shoot 54.5% and pull away comfortably with three minutes remaining. I have no idea what's going on.

Offensive boards. This was a game where offensive rebounds felt inevitable. Credit Ilyasova and Sanders for their positioning on the shot, but quite a few just bounced right into the waiting hands of a Buck. Second chances never hurt anyone, right?

Larry Sanders. With 36.3 seconds left and the Bucks up eight, Sanders motioned for increased crowd noise, and was happily obliged. Those are the emotions we like to see worn on Sanders' sleeve. Also, this: 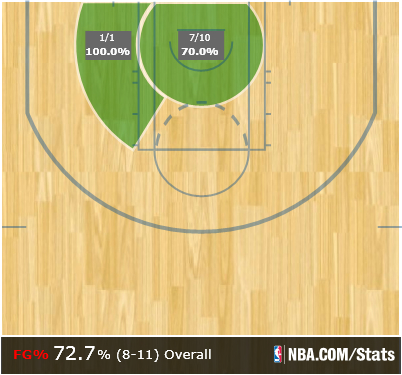