With 48 assists in his past three games, Brandon Jennings has seemingly transformed into an elite distributor overnight. How has he been racking up such impressive numbers, and where does he go from here?

Share All sharing options for: Breaking down Brandon Jennings' deluge of dimes

We talk a lot about "sample size" when discussing statistics in sports these days, be they advanced or rudimentary. Every subset of data, every streak-in-the-making is subject to skepticism. Is it real, or just a bump in an otherwise smooth reality?

That's a natural and important question to ask in the wake of a three-game stretch by Brandon Jennings that defied pretty much every historical trend. Jennings, who ranks five points below average in assist rate among point guards averaging at least 20 minutes per game, has racked up more helpers in the past three games than any other player over an equivalent stretch this season. Whether you choose to speak in math or plain ol' American English, it's hard to call this development anything more than unlikely. So don't feel guilty if you haven't bought in to new-and-improved Brandon Jennings with all your heart. It's not bad fandom, it's being realistic.

But still...something is going on. Sample size considerations are key to any statistical analysis, but the magnitude of any deviation from the mean matters too. So when Jennings obliterated his previous career high in assists in consecutive games, then nearly matched it in a third, something was obviously at work, something that had previously been absent.

Jennings has shown impressive passive ability in flashes before, but never anything this consistently excellent. How has he been achieving such heights? He's had some help, to be sure, but he's also helped himself by regularly putting himself in position to set up his teammates. For starters, let's check out what kind of plays Jennings has been getting his assists on. 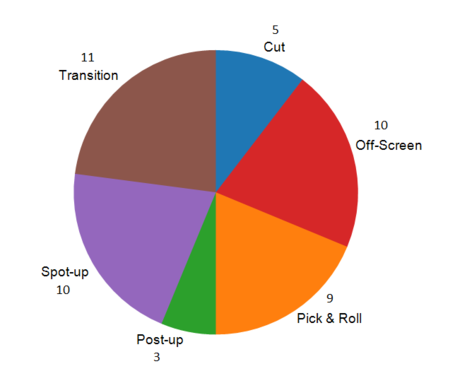 Considering the relative efficacy of Milwaukee's offense when it can regularly get out in transition, it should come as little surprise that more of Jennings' assists have come in the open court than any other play type (though it's close). These might be somewhat arbitrary, in that any player could reasonably be expected to make the right pass on a fastbreak, and Jennings simply tends to receive outlet passes more often than other guys. On the other hand, Jennings' finishing (in)ability makes passing the right move in many cases, so even mundane passes probably represent the "right" play.

Next on the list are spot-ups and off-screen plays, generally the easiest assists to come by. These are the ball swings and deliveries under little-to-no pressure where the passer does a tiny fraction of the work and gets half the credit. What's more, many of these assists are pretty loose in their definition, with the scoring player doing substantial work himself to set up the basket. But even Chris Paul and Rajon Rondo rack up plenty of assists with simple passes, so there's no reason to hold them against Jennings.

The pick-and-roll dimes are almost always the most impressive, since the play typically involves two players on the move and under defensive pressure, usually centered around the bucket itself. Over the past three games, Jennings has dished nine assists to the roll man in a pick and roll set while attempting 18 shots (hitting 10 of them) as the ball handler in such a set. However, those assists and solid shooting have been offset a bit by four turnovers.

The cut and post-up assists are basically freebies, particularly the latter, which in this case include two deliberate post scores by Samuel Dalembert against the Clippers for which Jennings received pretty generous credit. Players like Monta Ellis and Luc Mbah a Moute are great cutters who can give their teammates easy assist opportunities, but some of the requisite passes were certainly more than routine.

It's obvious that a thorough analysis of Jennings' passing binge requires more than organizing raw totals. In fact, the relative ambiguity and wide variability from one assist to another makes raw totals a shaky measure of passing ability in general. In the interest of gaining a slightly deeper understanding of how Jennings has been breaking down defenses, I examined each of the relevant 48 assists and determined whether Jennings "drew" the defense to him during the play. I'll readily admit to the arbitrary nature of such a determination, but I essentially looked for plays where the man defending the eventual scorer clearly adjusted his position or defensive attention based on Jennings' own action. The results are as follows:

In total, 20 of Jennings' 48 assists (41.7%) involved some degree of defensive manipulation. Unfortunately, the completely proprietary nature of this metric--not to mention the sheer fact that it took me like 45 frequently-distracted minutes to do three games for one player--makes it hard to compare that figure to any kind of baseline. But there's still likely some value in knowing that less that half of Jennings' assists have been true "draw and kick" plays or something comparable. Again, I'm sure every point guard, from the bench guys to the stars, gets a significant chunk of his assists of cheapies, but, well, you know.

But Jennings' new style of play isn't just about racking up assists, it's about facilitating the offense by filling a crucial role and cutting down on comparably "bad" possessions. As such, we should address the equally beneficial other half of Jennings' new past-first persona--that is, the "shoot less, but better" half. During the stretch in question, Jennings has averaged about 10.4 shot attempts per 36 minutes (note that per-minute stats are going to be critical here because two games went to overtime), considerably lower than his 15.9 FGA/36 season average. His per-minute scoring has correspondingly dropped to 13.5 PTS/36, versus his 17.7 season average, but it's being dragged down by his 11-point outing against Toronto, which of course was his most prolific passing game. He's topped 71% in True Shooting two out of three games and is making almost 59% of his three-point attempts. If you're familiar with so-called Skill Curves, this development should come as little surprise: most player experience a boost in efficiency when their usage decreases, a product of taking fewer-yet-superior shots. The game against Los Angeles, while it came in defeat, was basically the rapid self-actualization of Jennings' new style: nearly every shot he took was a three-pointer, but he still managed to pile up 12 assists. The benefits to the offense have been clear; the Bucks have matched or eclipsed their season-average offensive rating in each of the past three games.

This isn't to say there aren't trade-offs to a style of play for Jennings that demands nothing but threes and passing. First, no single player can just magically create assists. Teammates have to get in position for the pass and finish the play. If the rest of Milwaukee's roster has an off night from the floor, Jennings could quickly see his assist opportunities dry up, at which point "only on-balance, open threes" could quickly become "ALL OF THE THREES AND ALSO SOME OF THESE FLOATERS AND LEANERS". There's also the question of just how effective a distributor any lead guard can be if he's focused primarily on the regions of the floor further from the basket. In the half court, where most of the game takes place, the ability to drive the lane and kick out to open shooters is critical, and there hasn't been as much of that in Jennings' recent streak as one might have guessed. Of course, Jennings is back up at 38% shooting from deep, and if he stays hot he'll likely get more open lanes through the paint as defenders challenge his jumper more aggressively.

Revisiting this sort of data in a few weeks would surely be an interesting experiment. If Jennings continues to record gaudy assist totals, I might just force myself to do so. So what would mark continued success and improvement? A few things:

MySynergySports.com provided video and data for this article.