Larry Sanders for 2013 NBA Defensive Player of the Year: Both sides of the debate

Milwaukee Bucks big man Larry Sanders has dominated opponents on the defensive end of the floor during the 2012-13 NBA season. But does he deserve to win the NBA Defensive Player of the Year Award? We discuss both sides of the argument.

Share All sharing options for: Larry Sanders for 2013 NBA Defensive Player of the Year: Both sides of the debate

Larry Sanders has been excellent on the defensive end of the floor for the Bucks this season. That's not up for debate. However, Marc Gasol, Roy Hibbert, LeBron James, Joakim Noah, Andre Iguodala, Tim Duncan and others have also performed very well on defense and all of them have led better teams to more dominant defensive performances throughout the year. There may not be a wrong answer for 2012-13 NBA Defensive Player of the Year in that septet, but that's why it's a bit of a tough sell for Larry.

Credible arguments for every player on the list have already been crafted somewhere in the NBA blogosphere. Marc Gasol is the favorite. Mike Prada of SB Nation (here), Zach Lowe of Grantland (here) and Rob Mahoney of SI.com (here) have decided on Gasol. Chris Palmer of ESPN believes LeBron deserves to win DPOY. Benjamin Hochman of The Denver Post thinks Andre Iguodala should win the award. Kevin Pelton of ESPN pegged HIbbert as his original DPOY favorite before deciding on Gasol. Noah has developed a strong following close to home on team blogs. Tim Duncan has done the same. You get the idea. I won't bother regurgitating those columns in a less elegant manner.

We've been trumpeting the virtues of Larry Sanders all season long. Kirk Goldsberry and Eric Weiss made him the feature of their amazing presentation on defense in the NBA at the MIT Sloan Sports Analytics Conference. The Bucks felt confident enough about Larry's case for DPOY to roll out a big campaign that included the Larry Blocks site and a package of actual blocks that can spell out the phrases "Larry Sanders," Defensive POY," Most Improved," and "Fear a Deer." It was a brilliant move.

Our favorite Bucks big man is clearly in the mix, but the case for him to win DPOY is delicate. All of the little contextual tiebreakers that typically factor into the voting cut slightly against our favorite wacky waving inflatable arm-flailing tube man. A good portion of the raw stats weigh in his favor. Here are both sides of the Defensive Player of the Year debate for Larry Sanders... 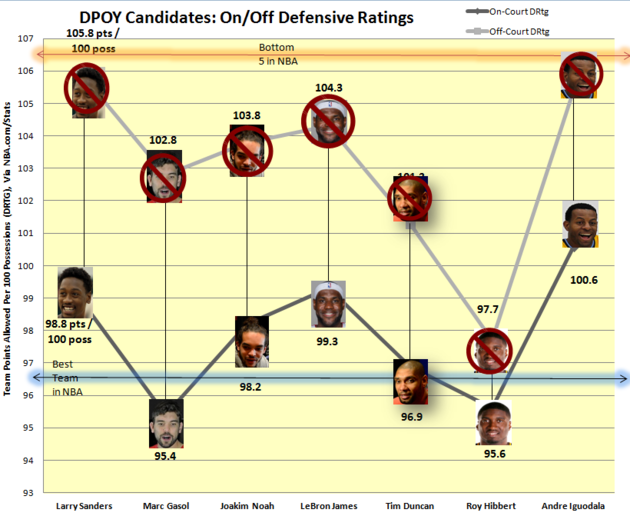 The Argument Against Sanders (Defense as Weight Loss)

The argument against Larry Sanders would be simple if he'd merely returned from the off-season as the same player and just logged more minutes than last year. That's not the case. His crippling foul rate (i.e., paint defense gone wrong) and stunningly low defensive rebounding rate (i.e, failure to help the team turn solid defense into a change of possession) used to drag him down. Those fundamental flaws are gone.

If you dismiss Mr. Sanders as a top candidate, I contend that you conceptualize defense like weight loss. When a contestant on The Biggest Loser drops 210 pounds and transforms from unconscionably obese to significantly overweight, the most shocking thing is always how things got so bad in the first place. With a little hard work and attention to detail, it's a fairly straightforward transition from morbidly obese to something still a bit less than healthy. Less junk food. More exercise. Voila.

When team defenses in the NBA get fat and lazy, the problems are just as easy to spot. Guys gamble for steals, fail to close out on shooters, miss rotations and foul too often. Coaches like Scott Skiles and Doug Collins have made careers out of becoming personal trainer types that teams hire to whip lumpy defenses into shape. They demand discipline and usually put the rotation on a diet that weeds out players with poor self-control. Soon enough the team defense sheds the extra 210 pounds and gets fitter.

It becomes harder and harder to drop each next pound, however. It takes more dedication to tap into the smaller reserves of energy, and even the most elite athletes on strict diets have a tough time dropping below two percent body fat. The same thinking applies to defense in the NBA. It can only get so good -- you can't hold teams scoreless -- and it takes consistently excellent execution to keep the unit in tip-top shape.

The Bucks are an alarmingly fat team without Larry Sanders. Brandon Jennings and Monta Ellis love junk food (they gamble for steals), Ersan Ilyasova has a glandular problem (he can't match up with PFs or SFs) and J.J. Redick has bad genes (too small and unathletic to hang with wing players). Sans Larry they are bad enough to land near the bottom-5 in defensive efficiency.

Sanders turns them into a top-5 unit when he's on the floor, but much of the work he does to pull the team away from the XXXL elastic pants zone gets taken for granted. Coaches like Skiles and Collins have suffered the same fate over the years: it always feels pretty easy to turn a bad defensive team into a decent one. In truth, Skiles and Sanders had a pretty good thing going, and the Bucks have struggled to replicate it:

Instead, we idolize the vanguards of the elite units in the NBA because the work seems harder at the margins and the results are statistically more special. Larry (and Skiles) helped to trim most of the excess fat from the Bucks' defense this season, but there's a reason why the penultimate prize on a major, long-term show like The Biggest Loser just $250,000. The shift away from self-destructive behavior is considered its own reward.

Guys like Gasol, Noah, Hibbert and Duncan anchor some of the top defenses in the NBA. Their hard work doesn't always shine through in dramatic before-and-after images (see the chart above), but the final product is a lot nicer to look at. For better or worse, plus-sized models will simply never draw as many eyes or as much attention as super models.

If you run into someone who argues that Gasol et al. could easily fill Sanders' role on the Bucks, but that Larry would have a tougher time replicating their production on the elite teams, this is the type of thinking that could get them there.

The Agrument For Sanders (Defense as Triage)

But maybe NBA defense isn't like weight loss. Maybe it's more like triage in the emergency room, where the most urgent cases take priority over all others. Medical experts are funneled to the critical situations on the assumption that they can provide the most help there.

Among the teams with serious DPOY candidates, the Bucks would clearly be at the top of the list in a triage scenario. Without Sanders they turn defense as we know it into a post-apocalyptic hellscape where opposing teams take control of the paint and patrol the arc while Bucks defenders wander alone in the mid-range areas -- especially since Skiles made his exit in January.

Larry has done more than enough to resuscitate the unit. To wit, he:

Take away Sanders and the Bucks are downright awful on defense. The same can't be said for any of the other guys on the list. In fact, I'd be scared to even think such a thing in front of guys like Tony Allen, Luol Deng and Paul George. Gasol, Noah and Hibbert are excellent defenders, but strong play on the perimeter helps to funnel the action to them at angles that put offensive players at a disadvantage. Larry Sanders often deals with multiple players converging on the rim after Jennings or Ellis put up little-to-no resistance outside the arc.

The sheer weight of Larry's physical freakitude has allowed him to make an impact on many possessions where strictly positional defenders might otherwise falter. It's not a knock on Gasol et al.; it's just a reminder that Sanders' job has been very demanding this season. That has to be worth something.

If you run into someone willing to argue that Gasol et al. would struggle to fill Sanders' role on the Bucks, and that Larry would have an easier time replicating their production on the elite teams, this is the type of thinking that could get them there.

The fact that we can use the cream of the NBA crop as a measuring stick for Larry Sanders is an excellent sign for the future of the franchise. Gasol would get my vote this year based on his durability and production in a tough Western Conference, but my mind still occasionally wanders to an alternate reality where Scott Skiles stayed on as head coach and helped Larry capture the title of best defender in the association.

The less-encouraging reality of the post-Skiles experience is ultimately where the DPOY case falls short for me. Milwaukee has been too lax on defense over the last 50 games. It has suddenly become difficult to think "good defense" when watching the Bucks, and losing that basic association at the team level makes it nearly impossible for Sanders to win the award.

He slipped a bit in the second half of the year, but his overall numbers are still excellent. He belongs in the conversation. He deserves second- and third-place votes. He has officially arrived as an elite defender in the NBA, and we don't need an award to tell us that. This won't be Larry Sanders' year, but I will remember it fondly as the Year of Larry Sanders. He's here to stay.