A preview of the first round NBA playoff series between the Miami Heat and the Milwaukee Bucks. An important reminder of just how good LeBron James and the Heat have been this season.

The opening round of 2013 NBA Playoffs is rarely pretty. Sometimes it takes an extra game or two, but sub-.500 teams like the Milwaukee Bucks are always dispatched by true contenders like the Miami Heat. If you call yourself a true NBA, I defy you to explain why you would ever want an upset to occur in this series. LeBron James is the best player on the planet, and we deserve to see him carry his excellent team deep into the playoffs for a run at an NBA title. That's what we all really came to see. Sorry Cinderella, run back home to the NCAA Tournament.

For all of the "The Bucks will win if..." banter you will find elsewhere over the next week, this series isn't about the Bucks. Of the 256 teams that have qualified for the postseason in the last 16 seasons, the 38-win Bucks finished with the fourth-worst record in that group. LeBron and the Heat picked up 71 percent of Milwaukee's total wins in a single (phenomenal) winning streak! The Bucks lost 14 of their final 20 games to limp into the playoffs. The Heat lost 16 games the entire year. Even the playoff series hip-hop theme song I wrote and recorded gave the Bucks no shot to win. But don't tune out just yet.

Despite everything stated above, the matchup carries some intrigue. Why? Because it's a clash between the impossible expectations carried by a super team and the preposterous odds of upset for a hapless group of misfits. I would never plop down $10,000 at a roulette table in Vegas and bet it all on Red 3 (hint: this is a secret Brandon Jennings reference), but if you know someone who wants to do that I'd be more than happy to show up and see what happens.

I'm sorry, but I can't get pumped up about the corporate, bottom-line virtues of national exposure for the Bucks and the infusion of playoff revenue. The Bucks aren't on national TV because the haven't given the league a reason to pay any closer attention. If the revenue bump is the big deal, maybe they shouldn't be trading away a young, cost-controlled assets like Tobias Harris. Or maybe we should see if they can sell the playoff spot to the 43-win Jazz team sitting at home simply because they happened to be in the wrong conference. Let's move on.

The Bucks don't seem capable of raising the level of their game high enough to truly compete with the Heat over seven games, but something crazy could happen on any given night. It might be worth it just to see how Jennings, Monta Ellis, J.J. Redick, Ersan Ilyasova, John Henson and Larry Sanders respond when LeBron, Dywane Wade, Chris Bosh et al. raise their intensity and execution to a level Milwaukee has never seen before. I'm especially interested to see if Henson can tap into his 17-point, 18-rebound performance against Miami on Nov. 21.

But let's not overstate the intrigue of this series from the Milwaukee perspective. I reject the theory that playoff experience (read: losing to better teams) leads a No. 8 seed to incremental improvement down the line. It's an especially silly theory with a team like the Bucks, which stands to lose some combination of Jennings, Ellis, Dunleavy and Redick this summer in free agency. Here's where things stand from a basic statistical perspective. 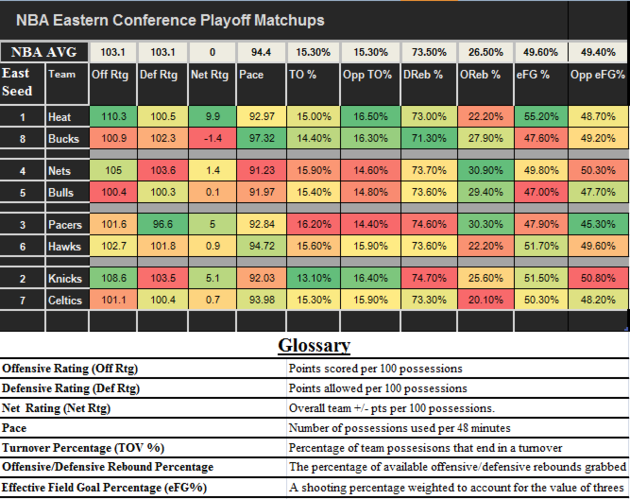 The Heat put their defense on cruise control in the early part of the season, but make no mistake: they have the ability to shut down opponents when they assert themselves on the floor. Milwaukee's especially poor eFG% points to offensive deficiencies that plagued the team in the early part of the year, but as I've discussed before they become dangerous on offense with J.J. Redick and Monta Ellis in the lineup. The issue is that the team is heavily dependent on Monta Ellis to create offense for himself and others.

Unfortunately, the rise in offense for Jim Boylan's squad has come with an even bigger drop on defense. The mix of toxic defenders around Larry Sanders -- along with the general drop in defensive accountability -- probably torpedoed Larry Sanders' chance at winning Defensive Player of the Year.

If somehow the team can combine the best elements of the Skiles defensive execution and the Boylan offensive execution, the Bucks could actually cause some problems. Alas, the talent on the roster is too flat and the combinations of talent are too delicate for the whole thing to come together, especially against a great team like the Heat.

If we are going to use all caps for LARRY SANDERS!, we need to use 72-point bold font for all references to the top end of the Heat roster. Miami isn't deep, but James, Wade and Bosh have been excellent. Even key role players like Shane Battier, Mario Chalmers, Ray Allen and Chris Andersen have been extremely good. The basic numbers are impressive, but the advanced stats are staggering. First let's look at those basic numbers. 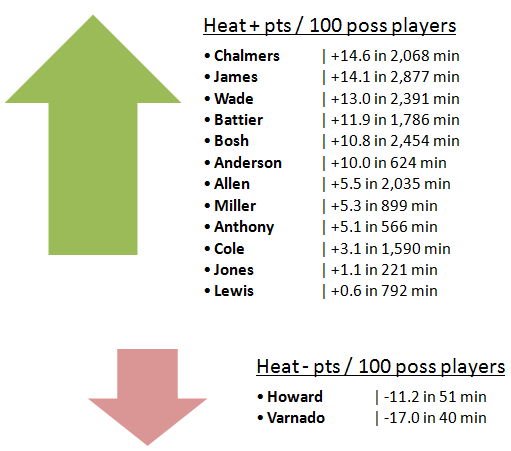 With playoff rosters and rotations set to shrink, there won't be many soft spots left for the Bucks to attack. LeBron gets most of the credit. Consider this: of all the players who have logged minutes for Miami this season, the only player that causes the team to have a negative efficiency rating when he's off the floor is LBJ (Heat are -1.6 pts / 100 poss with him on the bench), per NBA.com/stats.

It gets even worse when you drill down to see how well Erik Spoelstra managed different lineups via the NBA.com media stat site. I had originally intended to do a full lineup pyramid analysis like I've done with the Bucks this year, but the Heat didn't have any bad combinations to pick on. I wound up looking at the most-used lineup combination in each category, and the key point is that when the Heat play their top guys they are nearly impossible to beat:

The lineup pyramid below covers some of the most-used lineups on the team year. These are the groups the Bucks will be up against when the postseason starts. I wish them luck. Our guys are going to need it. 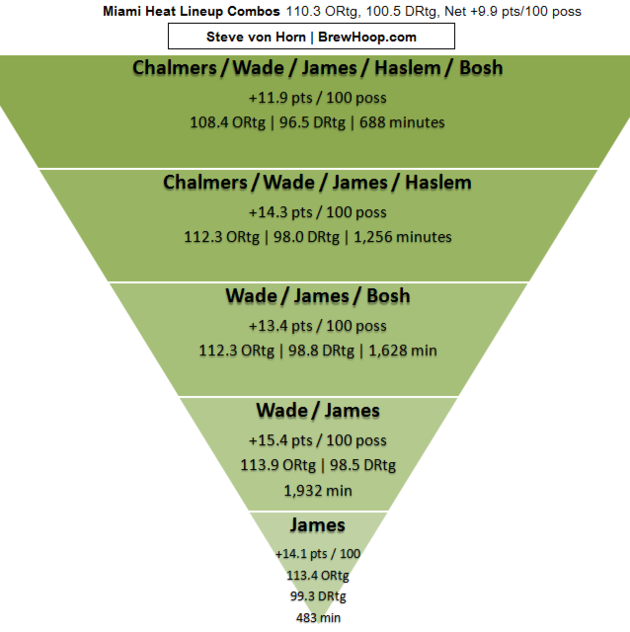