The first-round 2013 NBA playoff series between the Milwaukee Bucks and the Miami Heat got underway on Sunday. LeBron James dominated in Game 1 and the Heat took away Bucks role players on offense, as we discuss in our recap podcast of the Heat win.

Welcome to LeBron James' world. The best player in the NBA set the tone in Game 1 of the first-round 2013 NBA playoff series between the Miami Heat and the Milwaukee Bucks, and led his team to a 110-87 victory with game highs in points (27), rebounds (10) and assists (8). Nine of LeBron's 11 shots came inside the restricted area (he was 8/9 shooting inside the charge circle, as he attacked the rim and dissected the Bucks defense to help the Heat build a 50-34 advantage on points in the paint. Chris Bosh chipped in 15 points on seven shots and pulled Larry Sanders away from the rim to allow the Heat to attack.

Meanwhile, Miami's defense shut down the role players on Milwaukee and forced Brandon Jennings (26 points, two assists, three turnovers) and Monta Ellis (22 points, three assists, two turnovers) to take complete ownership of the offense. Easy looks were hard to come by, and the offense for the Bucks never found a way to keep pace with what Miami managed to do. It wasn't complete domination, as the Bucks stayed within range in the first half, but the Heat certainly finished the game on a high note.

Here's our in-depth podcast recap of Game 1. It covers a variety of issues, including what the Bucks can do differently with Mike Dunleavy, J.J. Redick and Larry Sanders to have a better chance in Game 2 on Tuesday night. 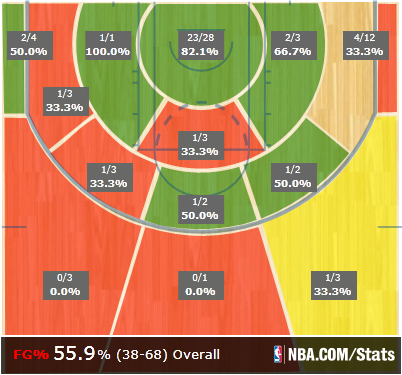 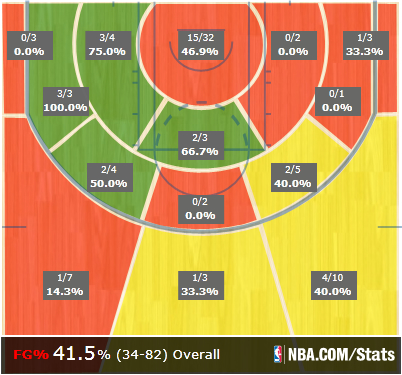 The best second-half highlight may have been TNT play-by-play man Kevin Harlan's reaction to this Chris Andersen dunk:

LeBron played so well he could barely even stand it: