We always wished it would end differently, but knew it would end this way. Despite keeping pace with the Miami Heat for most of three quarters, the Milwaukee Bucks lost 88-77 thanks to an explosive fourth quarter run from LeBron James and the Heat.

Those who knew the Bucks best called this season-ending loss "expected" and a "perfect encapsulation" of the schizophrenic dichotomy that has plagued the team throughout their 86 games together (give or take).

"It seemed like every time we were making some sort of move, either they'd make a big play or there was a turnover on our part," coach Jim Boylan said. "When you're playing against a quality team like Miami and you make some mistakes, they'll usually capitalize on them, and they did that. Our guys played really hard, so I was proud of the effort they put out there today. We lost to a better team, that's all it is."

Milwaukee regularly kept the game within a few possessions deep into the third quarter, before a Big Daddy named LeBron James drilled through the heart of the Bucks' defense, stopping only to drop a few dimes to his sniper teammate Ray Allen, whose two corner threes effectively closed the game and series for the Heat.

Despite the loss, Milwaukee's demise was bittersweet in that the team accomplished its stated goal (making the playoffs), yet failed to do so much as win a single game after making it onto the NBA's biggest stage of competition.

"Our goal coming into the season was to make the playoffs. We had a young team, inexperienced in a lot of ways," Boylan said. "The opportunity for them to compete and play against the world champions in a four-game series and compete well - I know they swept us 4-0 - but the way we played at times against that team will pay dividends for us down the road for our guys.

Right now it stings, you don't feel good, but as you reflect back on that during the summer, it can serve as a motivator. I'm very proud of the fact that we fought into the playoffs and had the chance to play against Miami. You tip your hat to them, and let's see how they continue on into the playoffs."

Chances were aplenty throughout most of the series, and the season, but the Bucks' consistent inconsistency doomed the team to a fate worse than the NBA Lottery: A first round sweep. Not sure a simple goal like making the playoffs numbs that reality very much.

Brandon Jennings. Where for art thou, Brandon? Jennings was warming the pine for most of the second quarter, stepping out to get a quick one and a half minute burn, and all of the fourth. The box score alleges Jennings played 22:35, but you wouldn't know it from his line (3 pts, 1-7 fg (1-4 3fg, 1 ast, 1 stl, 1 blk). According to Boylan, however, his lack of playing time was more due to Miami's perimeter trapping and general size advantage.

"The matchups that were out there, I just felt like we needed to stay with the guys that were out there because they were giving us a little offense," Boylan said. "It was one of those decisions that was tough to make. Our roster is made up of some different pieces that you always have to try to put together. When I took Brandon out and put JJ (Redick) and Mike (Dunleavy) in, Monta (Ellis) at the point, I just thought our matchups were a little bit better."

They probably were, but it didn't matter.

Monta Ellis. Ellis (21 pts, 10-20 fg, 1-4 3fg, 8 asts, 5 rbs, 6 TO) hit a few jumpers, made a few crowd-pleasing lay-ins, continued his quest towards copyrighting "ill-advised," and missed a few defensive assignments on the perimeter. The Bucks still lost by double digits.

Luc Mbah a Moute. Led the team in minutes (40:23). Led the team in free throw attempts and makes (5-6). Played stellar individual defense on LeBron James, once again. The Bucks still lost by double digits. It feels like Mbah a Moute is wasted on a team like the Bucks, where he has to carry a larger load than he's capable.

0. Fourth quarter minutes for Brandon Jennings. That's fewer minutes than Ish Smith, Gustavo Ayon, and John Henson. As the old saying goes: "When in Rome we shall do as the Romans. When in hell we do shots at the bar."

19-5. Here's your obligatory mention of the Heat's breakaway run, along with a "LeBron had a hand in every one of the 19 points" rider attached.

-7. It's better than losing the second chance points battle by 12, but a 24-17 Heat advantage did little to help Milwaukee's cause.

Perimeter defense. At one point, LeBron James drove the baseline and was met immediately by two collapsing Bucks defenders. With a quick wrist-flip, James swung a pass to a waiting Ray Allen for an open three. I'm not sure how you defend that type of court vision, but Milwaukee's general awareness around the perimeter has left much to be desired the entire series. Why would the final game be any different?

Chances blown. History will call this series a blowout (all four Miami wins by double digits), but you'd be hard-pressed to find someone that thought the Bucks were playing the Heat at their best. Miami committed 16 turnovers in Game 4 (for 20 Bucks points), and couldn't close any game out until the late third and middle fourth quarter. 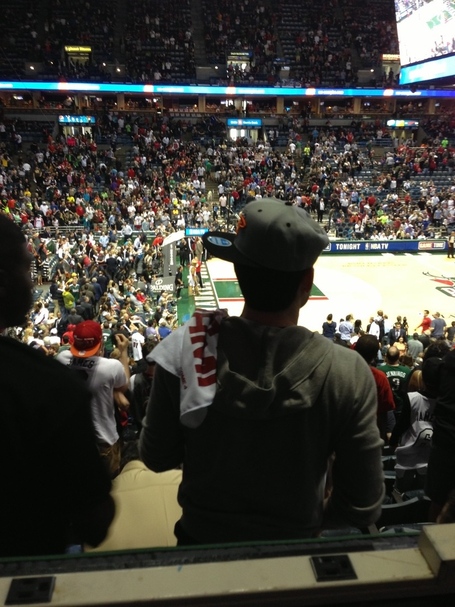 The offseason. What is Jim Boylan's fate? Will Monta Ellis pick up his player option? Is JJ Redick swimming towards the open waters of free agency, never to return to the Cream City? Will the team even pursue Mike Dunleavy? What the hell are the Bucks supposed to do with Brandon Jennings? Perhaps most importantly, is Larry Sanders going to get paid?

Heat vs. Bucks Game #4: Miami sweeps Milwaukee out of playoffs, into uncertain future