NBA Playoffs 2013, Heat vs. Bucks Game 4 highlights: Sweeping this season under the rug

LeBron James and Miami Heat brandished their brooms and swept the Milwaukee Bucks out of the 2013 NBA Playoffs on Sunday. Time to lift up the rug and sweep this entire season under it.

Share All sharing options for: NBA Playoffs 2013, Heat vs. Bucks Game 4 highlights: Sweeping this season under the rug

The Milwaukee Bucks have officially been eliminated from the 2013 NBA Playoffs. It didn't take long, but it sure felt like a protracted affair. LeBron James and the Miami Heat were ready with their brooms long before Brandon Jennings got out of pocket and predicted Bucks in six. Milwaukee was a mess of a team long before J.J. Redick revealed he hasn't been talking to Jim Boylan and long before Jennings was benched for the fourth quarter of Game 4. It's over, and yet it's just getting started.

Bucks in six will quickly be forgotten. What the Bucks do with six free agent players in the offseason will be remembered as a pivotal juncture for the franchise.

Dwyane Wade sat out on Sunday, but that didn't stop the Heat from playing from the front for the full 48 minutes or from ripping off a decisive 19-5 run down the stretch. After four games, you may be able to count the minutes Milwaukee held a lead on your fingers and toes. That's how it goes when you're a sub-.500 team playing a title contender.

Off season: over. Offseason: just beginning.

Dan stuck a fork in the Bucks on Monday morning, calling out the hidden costs of the "win-now" strategy:

People are on to the Bucks' game. I'm on to the Bucks game, despite my stubborn reluctance to admit its childishness. It's a game they can't win, and it's time to stop playing. They've been building on an unstable foundation for years, and it took theMiami Heat just 192 minutes to completely demolish it.

This isn't limited to a critique on the players Milwaukee has accumulated and cobbled into a team. Nor is it a condemnation of the people in charge of the organization, who deal with some very real constraints and limitations every day. The grand designs on achieving respectability through accumulated Medals of Participation have had the curtains drawn back and their inner ugliness exposed.

Summarizing the Excellence of LeBron James 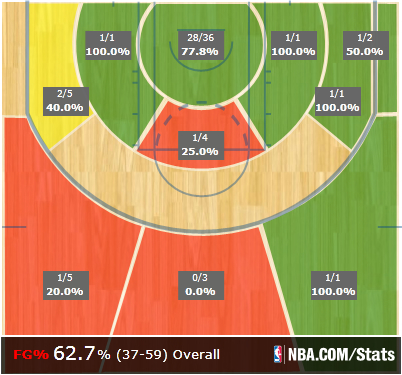 I will be cheering for LeBron and the Heat for the remainder of the playoffs because deep down in my heart that's what I want the Bucks to strive to become. It feels silly to even dream that big with where Milwaukee is at right now, but that's the type of basketball I want to watch: dominant, destructive, deadly-efficient and destined for greatness.

Bucks in six will quickly be forgotten. What the Bucks do with six free agent players in the offseason will be remembered as a pivotal juncture for the franchise. Brandon Jennings (RFA), J.J. Redick , Mike Dunleavy, Samuel Dalembert, Marquis Daniels and Joel Przybilla are not under contract for next season, and Monta Ellis could easily add his name to the list by declining his player option for 2013-14.

John Hammond will have to decide: will he sweep the old version of the Bucks under the rug and move on to something new, or will he try to pick up the scraps and put the pieces back together? All we can do now is wait.

Heat vs. Bucks Game #4: Miami sweeps Milwaukee out of playoffs, into uncertain future