Monta Ellis has been a workhorse for the Milwaukee Bucks since the team acquired J.J. Redick from the Orlando Magic prior to the NBA trade deadline. Check out just how important he has been in the latest lineup analysis post.

The Milwaukee Bucks have played 20 games since acquiring J.J. Redick from the Orlando Magic prior to the NBA Trade Deadline, and the results have been mixed. They've been mixed in an undeniably Bucks-y way, too: 10 wins, 10 losses. The team has dropped one game below .500, but thanks to the injury to Kevin Garnett the Celtics are within striking distance at the No. 7 seed.

Brandon Jennings can't keep anyone in front of him. He's turned into a lightning rod for criticism thanks to poor efforts and questionable remarks to the media. In turn, Monta Ellis has been incredible. The veteran guard has defied logic with recent fourth-quarter scoring outbursts, and after a disastrous start to the season he's become the clear leader of the team.

Monta has played 803 of 970 total minutes in the last 20 games, and when he's off the floor the team offense completely collapses. Here's the scariest split you may ever see, especially if you still want Brandon Jennings to be the point guard of the future:

The stats confirm what we've all noticed over the past few weeks. Ellis has been essential to everything good that has happened to the Bucks over the last 20 games. Jennings has been at the heart of what's gone wrong. Bambi Ball -- lineups with Jennings, Ellis and Redick together -- doesn't work.

Here is my standard disclaimer for the lineup pyramid analysis. Remember that this version covers ONLY the post-trade iteration of the Bucks. 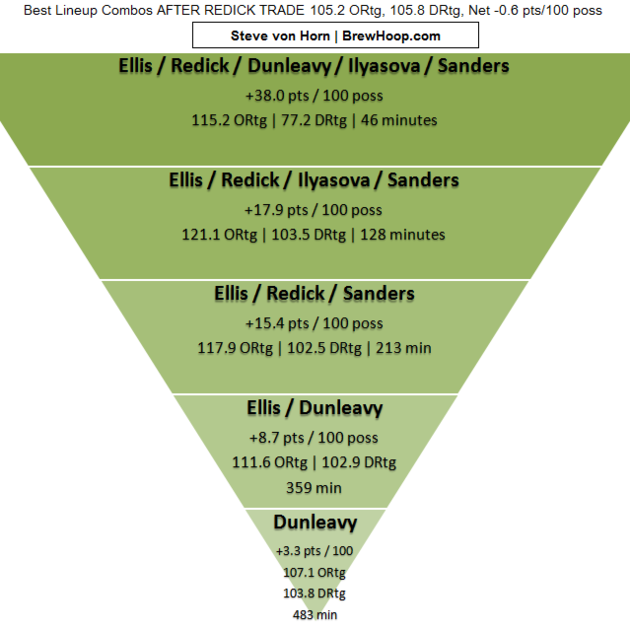 The best news is that Ellis works incredibly well with some of the best players on the team. Lineups where Ellis is paired with some combination or fragment of Dunleavy, Redick, Ilyasova and Sanders are among the most effictive lineups Jim Boylan can put on the court. Those groupings typically thrive on offense and survive on defense. It's the best you can hope for whenever Monta Ellis is the lead player in a lineup. 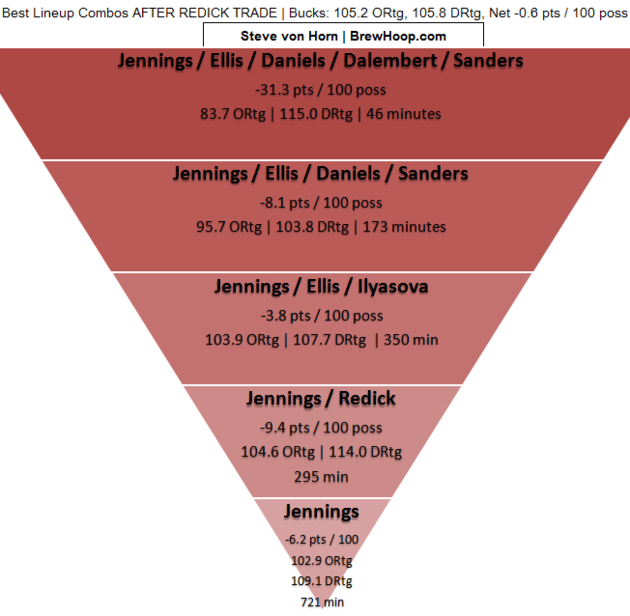 Oh Brandon, where have you gone? He's struggled on defense for most of the year, and I've even picked on him for his offensive deficiencies, but he's fallen off the cliff completely over the past month or so. The only regular player that has hurt the team more than Jennings (-6.2 pts / 100 poss) in the last 20 games is Samuel Dalembert (-17.0 pts / 100 poss). Dalembert isn't nearly as important. It doesn't matter much that Scott Skiles was essentially right to restrict Dally's minutes earlier in the year. The Jennings problem is one that could impact the future of the franchise, especially if he's not giving his full effort right now. How do you deal with a player who won't accept any changes to his role, even if he's performing poorly and hurting the team during a playoff push? 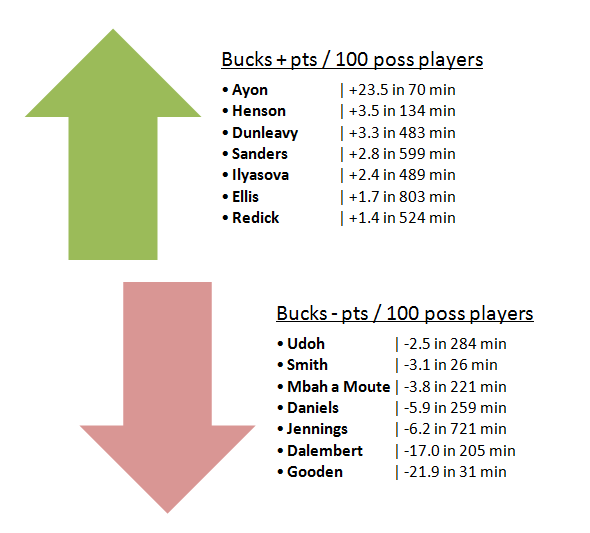