The NBA Eastern Conference playoff picture is coming into focus, and unfortunately the Milwaukee Bucks aren't making any progress. Here's an update on tiebreakers, schedules and standings.

Every next day tells us something about the NBA Eastern Conference playoff picture. The Miami Heat, New York Knicks, Indiana Pacers, Brooklyn Nets, Atlanta Hawks, Chicago Bulls and Boston Celtics have all clinched spots in the bracket. The Milwaukee Bucks are a near lock to take the final spot, but it's more accurate to say they accidentally occupy the eighth seed than it is to imply they've earned anything.

A home loss to the Timberwolves dropped the Bucks two games below .500 again, and a 3-7 stretch from the Celtics has been rendered moot. Boston still effectively holds a two-game lead on Milwaukee for the No. 7 seed -- it's 2.5 games in the standings, but Milwaukee owns the tiebreaker -- and now that a four-game home stand is over the Bucks will hit the road for six of their final eight games.

Meanwhile, it may not matter who the Bucks play in the post-season. All three of the top teams in the East are playing a much higher caliber of basketball than Milwaukee down the stretch. LeBron James and the Heat have won eight of their last 10. Roy Hibbert and the Pacers have done the same.

The Knicks, who are now the No. 2 seed, are playing better ball than Miami and Indiana. A 10-game winning streak fueled by a re-energized J.R. Smith, hot three-point shooting and then a scoring burst from Carmelo (90 points in the last two games) has pushed New York into the conversation for teams that could cause problems for the Heat. Given that the Bucks play the most games against +.500 teams and the most road games of any team in the bracket down the stretch, the thought of a series against the Knicks may not even be worth it to consider.

It's an uphill battler for Milwaukee, and the incline is getting steeper by the day. 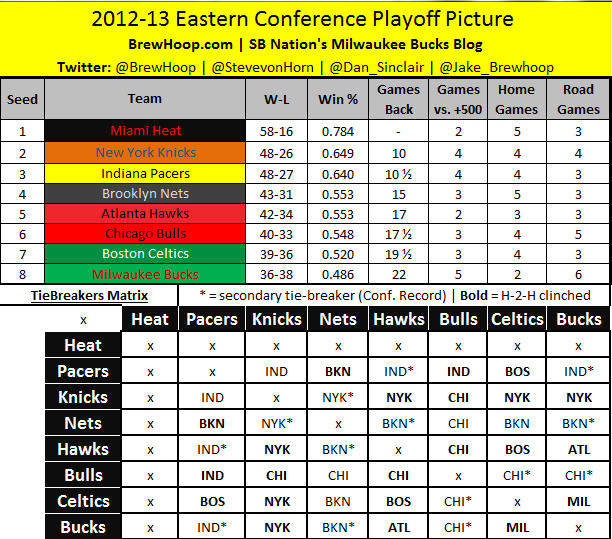 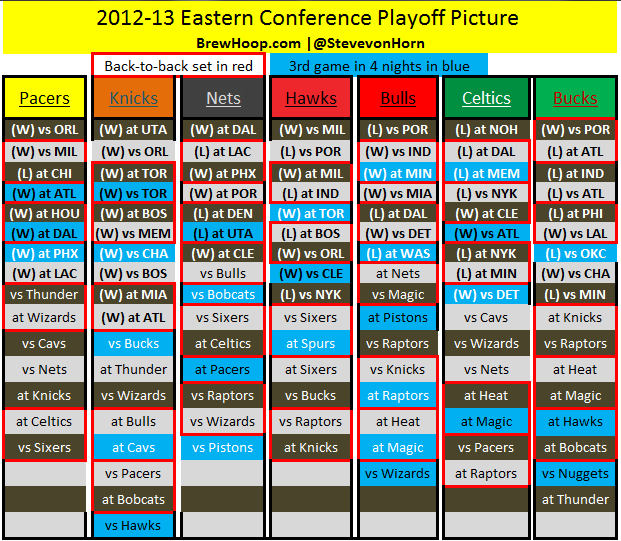