The misleading luck of the Bucks

The Bucks are firmly entrenched in the Eastern Conference playoffs, but even their mediocre record obscures the team's struggles this season.

Share All sharing options for: The misleading luck of the Bucks

You are what your record says you are.

If that little bit of sports mythos is true, the Bucks are every bit the slightly-below-average team we've spent years bemoaning. Two games below .500 at the moment, the Bucks can sleep soundly in their beds dreaming of the playoffs only because of the utter garbage making up the lower half of the Eastern Conference. By most accounts that's all the organization really wanted this season: a return to the postseason in an attempt to stir up anything resembling positive feelings in the city of Milwaukee.

Wanting to give fans a playoff series to cheer for is a fair goal, even if it likely runs counter to a true path to contention for this particular team. What's dangerous is thinking a team like the 2012-2013 Bucks, playoff-bound as they are, have truly put together a season worth building upon. That postseason fringe Milwaukee has occupied for the past few years puts their fate in the hands of a most cruel and deceptive force: dumb luck. Even over the course of a long NBA season, luck can twist our opinions of teams and players, shielding the truth and swaying decisions of the less-than-vigilant.

Think about that for a bit, because it seems pretty counter-intuitive at first. When trying to predict future win-loss records, current win-loss record isn't a particularly reliable metric. It helps to rationalize it this way: a basketball team's ultimate goal, in the most fundamental sense possible, is to outscore it's opponents by maximizing its own points scored and minimizing the points its opponents score. Basketball games are just arbitrary-yet-convenient ways of breaking up thousands of possessions. If we truly wanted to determine which teams were the best, we might have them play for months without stopping and compare scoring margins in the end. NBA games and seasons contain possessions in large enough sample groupings that the results in both cases should be relatively similar, but deviations still occur, as they have for the 2012-2013 Milwaukee Bucks. Unfortunately, the Bucks' point differential paints an even more grim (though perhaps less stagnant) picture than their place in the standings.

Using a formula originally adapted from sabremetrics pioneer Bill James' Pythagorean expectation, used to estimate a baseball team's expected record based on runs scored and allowed, the Bucks "expected" record can be estimated using their point differential. The estimation can vary based on the exponent used in the formula--different values tend to align better with different eras of play, largely dependent on average team pace--but the results all tend to stabilize at this point in the season. For reference, both Basketball-Reference and ESPN's Playoff Odds yield the same prediction for Milwaukee right now. 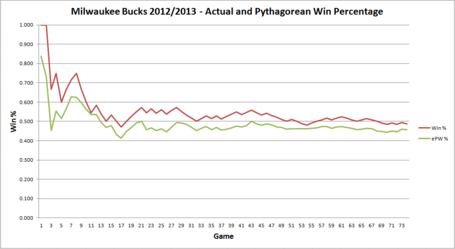 The last time Milwaukee's ePW crept above .500 was after a 117-90 win over the Detroit Pistons. At that point Milwaukee had outscored its collective opponents by a grand total of one point. The next day Milwaukee lost to Chicago by 16 and they've been below the median ever since.

Pythagorean Win Percentage shines a light on the noise inherent in win-loss records. Close wins may be thrilling, but they aren't a reliable measure of one team's quality over another. Close games can be swung by one loose ball, a missed shot, or a blown call. Witness, for example, the Bucks' 7-4 record in games decided by 3 point or less. That's the 3rd-best winning percentage in such games among Eastern Conference teams. But nobody would mistake the Bucks for an elite team, even in just their own conference. In fact, the Bucks' record in close games isn't even strong evidence they're good at winning such games; record in close games is a stat that tends to vary pretty wildly from year to year. Last year the Bucks were 4-6 in close games; the year before they were 3-8. The last time the Bucks made the playoffs they were 7-12 in close games during the regular season. In reality, good teams don't win close games, they win blowouts.

The Bucks' record in blowouts (games decided by 10 points or more)? 12-21. They're one of just two playoff teams with a sub-.500 record in blowouts, the other being their equally-lucky 7th-seeded nemesis, the Boston Celtics. Milwaukee's 21 blowout losses equal or eclipse those of six lottery-bound teams (Philadelphia, Washington, Toronto, Portland, Dallas, and Utah).

There might not be a lot of value added in an argument that a decidedly below-average team like the Bucks is in fact even more below average, but the takeaway should be a reinforcement of how treacherously hollow a "by default" playoff berth can be. Someone unfamiliar with the Bucks or the NBA in general might see a two-year trend of improvement--from 9th place to 8th place--and conclude progress has been made. But while the standings would corroborate such a conclusion, the truth speaks to another sports truism, one far less encouraging.

It's better to be lucky than good.