The 2013 NBA Draft is rapidly approaching, and a look back at the group of young prospects to pull back from the draft process in April highlights how tough things will be for teams like the Bucks, Celtics, Hawks, Cavaliers and Bulls.

The order of selection is set for the 2013 NBA Draft on June 27, but the crop of prospects available to be picked has changed a bit since March Madness unfolded in the NCAA. Big-name prospects like Nerlens Noel, Otto Porter, Ben McLemore and Anthony Bennett elected to stay in the draft after receiving positive feedback on their draft stock from the NBA Undergraduate Advisory Committee, but other potential first-round picks pulled out prior to the April 28 deadline. Here's a look at how the loss of college prospects like Marcus Smart, Alex Poythress, Isaiah Austin, Gary Harris and James McAdoo may have affected the draft Big Boards for NBA teams.

Last year I decided to assign color codes to prospects and track the Big Board (top-100) prospect rankings closer than the mock drafts from ESPN and Draft Express for a month leading up to the NBA Draft. I enjoyed this process a lot more than the typical "chase the latest mock draft for cheap thrills" model used elsewhere around the internet, so I'm back for more in 2013. If you didn't happen to catch that coverage, here's a primer from one of those pieces:

The NBA Mock Draft scene is fun, but the NBA Draft Top-100 prospect ranking landscape provides the pure player analysis we all really crave. It's strange that fans pay more attention to mock drafts than prospect rankings. The idea of a mock draft is merely to project what teams are most likely to do on draft day if they keep their pick(s), but that doesn't necessarily provide any useful commentary on whether the projected selections are prudent decisions under the circumstances. Typically, the true draft analysis comes on the back end of a bifurcated process, in the form of draft grades issued ex post facto and rarely (if ever) revisited down the line. I've covered mock drafts like crazy, but there is definitely more pertinent draft information to digest in other places.

This is where the Top-100 Big Board rankings on ESPN (Chad Ford) and Draft Express (Jonathan Givony) come into play. Where mocks merely seek to project the behavior of teams, prospect rankings provide insight on the potential and value of the actual players. That's what we all really want to know as the NBA Draft approaches: which players in the draft class are expected to become the best professionals down the line.

The experience helped to explain the rise of Dion Waiters -- and the backlash to the selection based on a sub-lottery ranking at DX -- as well as the fall of Perry Jones III and Jeremy Lamb on draft night. It's not a perfect look at the NBA Draft, but the Big Board analysis feels more relevant and enduring to me. Ford and Givony pin their reputations as draft gurus on their personal rankings, at least to a certain extent. I started tracking these lists in early March this year, and that's where I started to notice how much the withdrawals will affect teams drafting outside the lottery in 2013.

Lost Talent in the Middle

Oklahoma State point guard Marcus Smart was the best prospect to pull out of the draft, and his decision reportedly left the Orlando Magic "heartbroken," but most of the talented players who elected to return to school were hovering somewhere near the middle of the draft. The top-10 players haven't changed much over the course of several months. The late-lottery and post-lottery rankings have suffered severe shakeups. Things will be especially tough this year for teams like the Bucks, Celtics, Hawks and Bulls, who have all developed reputations for drafting well outside the lottery.

Here's a breakdown of the players who pulled out before April 28, along with their rankings on DX and ESPN Bid Board updates from before the start of March Madness (March 8) to after the National Championship Game (April 10):

These eight potential first-round picks, all 20 years old or younger, quietly disappeared from draft boards prior to the combine. The flood of prospects opting-in concealed an exodus that could disrupt the plans of teams like the Bucks. Mock drafts and prospect lists simply shifted up some other fringe first-round talents to fill the void, and most fans barely noticed how much young talent moved outside the reach of NBA teams. These players weren't necessarily reacting to a drop in draft stock, either. Cauley-Stein moved up from 35 to 21 on DX over the span I tracked, Smart moved up as well, and others like McAdoo, Robinson III and Harris held up well on both sites.

These are the things that trades to move back on draft day are made of, because shakier players are now placed higher on draft boards as a necessity. John Hammond and all the other GMs had to erase eight young and promising players from their target lists. That can't be considered a good thing. The domino effect has been interesting to follow as well.

The rankings are relative, and the landscape has undeniably changed. Gorgui Dieng, Dario Saric, Jamaal Franklin, Steven Adams and Tony Mitchell have moved up from the high 20s on ESPN and DX to fill some of those mid-round spots. They essentially made a jump over players who disappeared, which is hardly a jump at all.

Meanwhile, lesser prospects like Glen Rice Jr., Shane Larkin, Dennis Schroeder, Kentavious Caldwell-Pope and Allen Crabbe weren't even listed as top-30 players in March on ESPN and DX, but they suddenly were pegged with first-round rankings after the April deadline passed. Maybe these guys did something special at the combine to become worthy of a better spot, but the fact that eight young players vanished prior to their ascension cannot be overlooked.

The specific movements and rankings on each site will be discussed in greater detail during future posts, but the basic shift seems like it's worth mentioning. The Bucks have done an excellent job at finding NBA players in the middle of the first round, so maybe they will beat the odds again. If they do so again in 2013, it may be their most impressive draft yet. Finding a good player outside the lottery can sometimes feel like finding a needle in the haystack. Next time you look at a mock draft update, remember that some of the needles have already been removed from the hay.

Here's a more direct look at the changes that occurred on both sites from March to May: 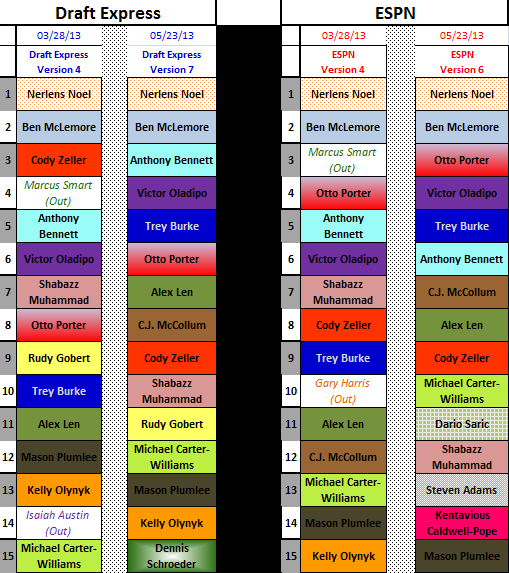 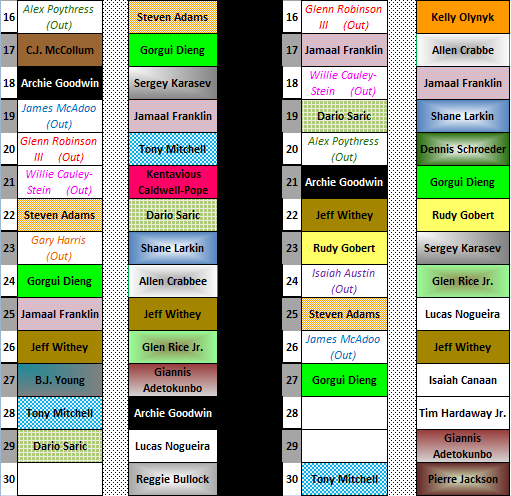