Jennings or Ellis? A quick look at point guard shooting.

The Bucks face a decision regarding the future of their high-profile guards. What can we learn from comparing their shooting numbers to other point guards?

Share All sharing options for: Jennings or Ellis? A quick look at point guard shooting.

The question of what to do with Brandon Jennings and Monta Ellis remains the biggest of the summer, even as the Milwaukee Bucks continue their search for a new head coach. To the objective outsider, that question has always been answered with one or the other. Jennings' youth, contract status, and role with the team since being drafted made him seem like the clear favorite prior to this season, but his rough finish and sour attitude, combined with some stretches of brilliance by Ellis, reportedly have the Bucks (and plenty of fans) leaning the other way.

Ideally the Bucks wouldn't be viewing the situation with resolute determination to retain at least one of the tandem, and it's entirely possible they're not. A preference for one over the other doesn't mean they're thrilled about either. This summer has been billed by many as a fantastic opportunity for the Bucks to hit the reset button, and parting ways with their flawed backcourt might be the best way to kick off the new era. But there are certainly scenarios in which keeping one of the two could make sense. That's primarily dependent on each's new contract: A shorter deal or low dollar amount wouldn't do much damage to the Bucks' future flexibility, and the Bucks wouldn't need to be shy about seeking out long-term replacements in the draft or elsewhere.

Lost in the talk of contracts and attitudes and trade value is a question that seems more like "pure" basketball. Jennings and Ellis have many similarities but their play styles, particularly when it comes to scoring, are quite different. Jennings is an average-to-good three-point shooter capable of occasionally catching fire from deep. Ellis is a fast, athletic slasher who can make tough shots at the basket and miss remarkably easy ones. That single disparity, while representing just a small part of the overall discussion of the two, blows up to something pretty important when run through a logical extension.

The question I asked myself is this: What's more important for a point guard: three-point shooting or field goal percentage at the rim? A highly complicated problem, one I had no hope of answering to any level of completeness in a day or so, but certainly something I could explore. In doing so I put together a couple graphs.

Note: It's too cumbersome to qualify everything here with generic "small sample size" warnings or reminders that I'm dealing with an arbitrary subset of players and blah blah blah. Just bear with me, I'm not carving anything in stone. 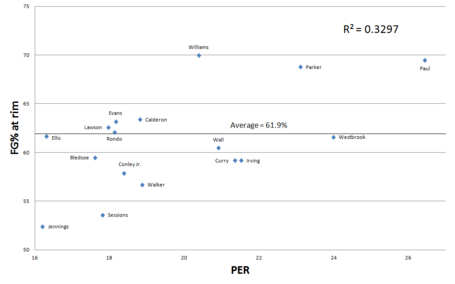 There's a clear trendline from bottom-left to top-right, even if the data doesn't fit too closely and the volume of shots created isn't accounted for (especially important with a player like Westbrook). It's a bit incredible how far Williams, Parker, and Paul are above everybody else. Another point for the "Tony Parker is always underrated" crowd. 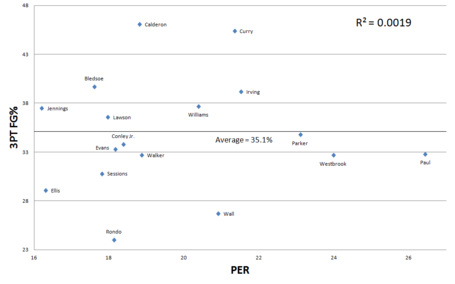 No obvious trendline here, and the equation actually has a slightly negative slope. How many of you knew Jose Calderon led the NBA in three-point percentage this season?

As evidenced by the r-squared values in each graph, there is a much stronger relation between individual performance (as measured by Player Efficiency Rating) and FG% at the rim than with PER and 3P%. It's still not particularly high and comes with an obvious "correlation vs. causation" caveat. There's an opportunity factor in play here too: nearly every player is going to get a decent number of opportunities to score at the rim, and those don't typically get passed up. Conversely, players might pass up open threes if they know they're not good shooters. It is what it is though, and it's enough to say, in general, "good" point guards tend to be good at making their shots at the rim, while their ability to hit three-point shots seems less crucial.

"Good" point guards tend to be efficient around the rim, while their ability to hit three-point shots seems less crucial.

We tend to think of scoring ability around the basket as a crucial skill for point guards because of the way it helps set up their passing game. Breaking down defenses off the dribble is a critical element of NBA offenses, and commanding respect as a point guard means drawing more attention away from your teammates. As long as the guy isn't a completely useless passer, there are going to be assist opportunities in front of him as a result. More assists, or even just theoretical opportunities for assists, would seem to be a boost for any offense.

Does three-point shooting fail to impact offenses in the same way? That seems unlikely. Ultimately the point guard is just one of the five players on the court for any offense, and there's no logical way to conclude that adding another three-point shooter is anything but helpful. The L4GJ-iteration of Brandon Jennings showed that it's possible to rack up assists while shooting almost exclusively threes, but that didn't last. Of course, assists might not even matter in the grand scheme of things.

Plenty to ponder here, but for now I'll leave you with one last graph. This one plots FG% at the rim and 3P% at the rim on either axis with a third variable represented by data point size. In this case, that variable is team offensive rating when the player in question is on the floor.