In our third anti-NBA mock draft feature, the evolution of the top-100 prospect big board at ESPN is analyzed. Ben McLemore is falling, Steven Adams is rising and Shabazz Muhammad is settling in the Bucks' range.

Welcome back to my 2013 anti-mock draft feature series, where the analysis shifts away from the cheap thrills of dreaming up fake draft scenarios to focus on more substantive prospect rankings and reports from the experts at ESPN and Draft Express.

My first 2013 anti-NBA mock draft feature focused on the young, talented prospects who withdrew from the draft process in April. The second article examined the fall of Shabazz Muhammad and Cody Zeller, and the rise of Tony Mitchell, on the Draft Express top-100 big board. This edition is dedicated to tracking the evolution of the top-100 rankings from Chad Ford of ESPN over the last three months.

Before we delve into the stories behind the movement, let's take a look at how the hierarchy has changed at ESPN from March to June.

Evolution of ESPN's Big Board 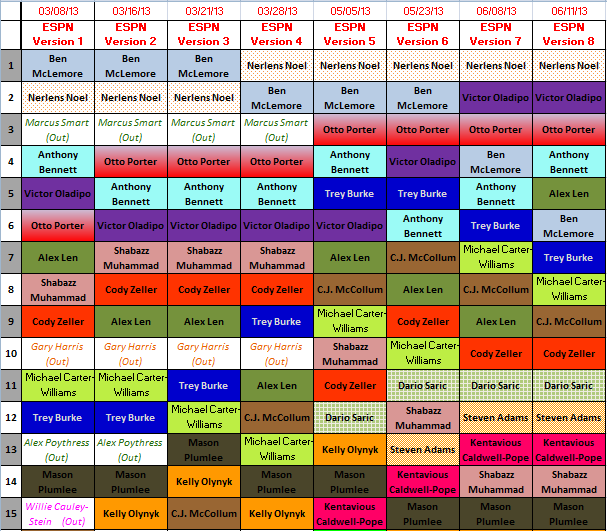 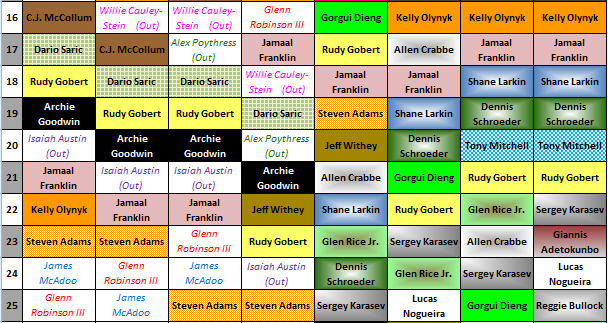 Why is Ben McLemore's stock falling?

Honestly, I don't know why Ben McLemore's stock is falling. With so many other top prospects injured or unable to work out -- including Nerlens Noel, Alex Len and Anthony Bennett -- maybe scouts and execs are using their excess energy to pick apart McLemore's game. The Bucks won't be drafting high enough to take him -- unless the Wizards pipe-dream scenario comes to fruition -- but he's the measuring bar for all SG prospects this year.

Everyone loves McLemore's potential, but some people are worried about killer instinct and his drive to be a great player. The talented shooting guard from Kansas is still No. 2 on SB Nation NBA's big board, yet he has fallen from that spot to No. 5 on DX and No. 6 on ESPN. So what gives?

McLemore has prototypical size and scored 16 points a game on 63.3% TS for a major program in a major conference during his freshman season. Sounds great, right? Some people considered it a disappointing year. In particular, his ball handling skills and ability to great good offensive opportunities in isolation are both under question. He played well in the flow of the offense at Kansas. The question is: can he do even more against superior competition?

With Ford, it comes down to a lack of assertiveness. He's gone so far as to say that McLemore doesn't have an "alpha-dog mentality," which feels a bit harsh for a frosh who scored efficiently for a program with high expectations. Ford reported that he came off as too nice during interviews with teams. The recent update associated with his drop on the big board came with a comment that execs were disappointed he refused to work out against Victor Oladipo and Shabazz Muhammad last week in Phoenix.

Even so, McLemore has drawn comparisons to Ray Allen. His shooting is often praised by Ford (and presumably the scouts he trusts), his athleticism is top notch and good shooting guards in the NBA are hard to come by.

Why is Steven Adams' Stock Rising?

When you're a legit 7-footer under the age of 20, NBA scouts are looking for reasons to fall in love with you. That's the simple answer here. After a so-so freshman season at Pittsburgh, the New Zealand native posted excellent measurements and athletic test results at the NBA Draft Combine and quickly started to emerge as the hot new name in draft circles. Ford compared his combine hype to the buzz that surrounded Meyers Leonard (the eventual No. 11 pick) in 2012.

Adams has the physical tools and the athleticism to become a big-time player, but his basketball skills are under-developed and he is a classic boom-or-bust pick. He has worked out for the Celtics, Jazz, Sixers and Thunder, and Timberwolves. Ford has heard that these workouts have been "stellar," and that the draft range for Adams is now No. 9-to-No.16. The Bucks don't seem like a proper fit, considering Larry Sanders is the best player on the roster, but Adams may help keep a team ahead of Milwaukee from drafting a wing player.

Which Prospects may be Available to the Bucks at No. 15?

Based on the ESPN big board, Milwaukee's range (mid-lottery) and team needs (center is locked down with Mr. Sanders), the Bucks could have a shot at finding value good with a variety of interesting players. I am an advocate of taking the best player available, but Steven Adams (12), Mason Plumlee (15) and Kelly Olynyk (16) would be tough guys in that range to sell to fans (and Larry Sanders' agent).

There are benefits to having talented centers in Milwaukee's draft range. Their selection will help push prospects at other positions down toward the No. 15 pick. Alternatively, their presence on the draft board at No. 15 could facilitate a trade down with an interested team.

Kentavious Caldwell-Pope (13), Shabazz Muhammad (14), Jamaal Franklin(17), Shane Larkin (19), Dennis Schröder (19) and Tony Mitchell (20) are the more sensible options available at No. 15. If Hammond and the Bucks continue their trend of taking players who have worked out for them, that leaves KCP, Larkin, Schröder and Mitchell -- though the Bucks did also interview Franklin and Plumlee at the Draft Combine.

I would be fine with the Bucks taking anyone in the sextet listed above, and here's how I rank them for the Bucks:

(1) Kentavious Caldwell-Pope - Shooting guard prospects are probably overvalued in the draft process because impact players at that position are difficult to acquire via free agency or trade, but I still like KCP. He recently worked out for the Bucks and Jonathan Tjarks of SB Nation likes his potential to become a two-way player in the NBA:

Given the lack of talent around him in college, his offensive potential at the next level is a little unclear. He fell in love with his jumper at times, but there weren't many driving lanes to the rim, especially since defenses could mark him all over the court.

The good news is that he'll be more prepared defensively than most prospects, since Georgia couldn't afford to play lax on that end this season. When they were winning games, they were grinding out 55-50 rock fights.

Either way, his combination of size, athleticism and shooting ability makes him one of the safer picks in this year's draft. At worst, Caldwell-Pope should have a long career as a two-way shooting guard and secondary playmaker in a backcourt.

(2) Shabazz Muhammad - I've already written about the power of expectations and the enduring reasons to bet on the former No. 1 recruit, so here's some of what Tjarks has to say:

Muhammad is a pure scorer who is most effective near his paint, where he uses his physicality to create looks at the basket. The question is how effective he can be at the next level if he has to score over the top of bigger and better athletes at the small forward position.

If he's not a primary option offensively, it will be hard to keep him in the starting lineup. At this point in his career, he's a decent outside shooter, an average rebounder, poor defender and a below-average passer.

If he can improve his passing and approach to the game, he has the chance to develop into a useful secondary playmaker. Regardless of the problems with the system at UCLA, there's no reason for a scorer as gifted as Shabazz to be averaging 0.7 assists a game.

(3) Tony Mitchell - I've also written about why I like Tony Mitchell -- another big-time top prospect out of high school -- so here's his scouting report:

Mitchell has the size of a power forward and the athleticism of a shooting guard, making him an interesting prospect. Every NBA team needs size, skill and athleticism upfront, and Mitchell has those qualities in spades. At the very least, he's an extremely intriguing defensive prospect who should thrive alongside a high-level point guard.

Mitchell has as much pure talent as anyone in this draft. The challenge for NBA teams will be figuring out how much of that talent was obscured by his situation in college and whether it can be unleashed in the right system at the next level.

More than anyone else, Mitchell could be the Paul George of this year's draft class.

(4) Jamaal Franklin - If his shot never comes around in the NBA, he will turn out a lot like Marquis Daniels. That's what bothers me, because the Bucks aren't exactly a team that has developed the shooting potential of prospects during Hammond's tenure. Tjarks says this about finding Franklin's perfect fit:

Franklin has a nose for the basketball and a good feel for the game. San Diego State ran a lot of offense through him this season. He's the rare wing player with the ability to create good looks for his teammates.

Were it not for his shaky jumper, Franklin would likely be a lottery pick. His inability to space the floor will be a tricky fit on many rosters, but on the right team, his ability to impact the game as a scorer, passer, rebounder and defensive player could make him one of the steals of the draft.

(5) / (6) Dennis Schröder / Shane Larkin - The Bucks do need a point guard, but I'm scared away by Schröder's lack of exposure to NBA talent, Larkin's lack of size and the amount of solid point guards available in free agency or on the trade market. Schröder's upside is exciting, and Larkin's PnR potential is enticing, but I don't think either guy should be taken ahead of the players listed above them on my list. Milwaukee could pass on these guys and still fill the point guard need via trade or free agency. Hammond could also draft Pierre Jackson, Erick Green, B.J. Young or Myck Kabongo in the second round and get a nice developmental prospect.

I see a lack of quality wing players available via trade, free agency or the second round, so that's why the PG scraps behind Trey Burke, C.J. McCollum and Michael Carter-Williams aren't a priority for me. What do you think?