Cody Zeller and Shabazz Muhammad are expected to be lottery picks in the 2013 NBA Draft, but their stock has dropped in the last few months on the Top-100 prospect rankings at Draft Express. Here's a closer look at how the DX board has changed.

Share All sharing options for: NBA Draft: Tracking Shabazz Muhammad, Cody Zeller and others on Draft Express' Big Board

If you love the NBA Draft, you should be more interested in Big Board rankings at ESPN and Draft Express than the mock drafts. The prospect ranking boards provide us with purer opinions on NBA potential than mock drafts, which are more like blind stabs at what team executives might do in certain scenarios. I covered that basic concept in my first 2013 NBA Draft piece last week, as I offered up a reminder about how many young, talented players have already pulled out of the draft.

This post is dedicated to tracking and explaining some of the player movement on the Draft Express top-30 from March to June. Cody Zeller, Shabazz Muhammad and Tony Mitchell get some spotlight treatment, but if you want to see the full evolution of the DX board you can head to the bottom of the post. I will do the same type of analysis for the ESPN board in the near future, so if you have any questions or comments please pass them along.

Shabazz Muhammad, Cody Zeller and the Power of Expectations

Life can be difficult for prospects at the top of draft boards. Expectations are sky-high from the beginning, and anything less than domination at the collegiate level could be viewed as failure by scouts and executives. Zeller and Muhammad have both dropped out of the top-five on the DX board since March, and here's a little background on why they've started to sink.

Let's start with Muhammad. Time flies when you're having fun, right? Well, it moves at warp speed when your father lies about your age to boost your draft stock. The L.A. Times uncovered the age discrepancy in March of 2013, Muhammad's father -- who is a slimy guy with a history of fraudulent behavior -- confirmed the finding and in the blink of an eye Muhammad transformed from a 19-year-old super prospect to a 20-year-old scoring forward with a clear physical edge over the high school players he dominated in prior years.

A lot of people were worried about Muhammad's performance at UCLA before the age issue emerged, but even the supporters were forced to take a closer look at his game after his extra birthday appeared on the official record. Kevin Pelton of ESPN rates him out as a sub-replacement-level talent due to his lack of assists, blocks and steals (stats that typically indicate athleticism).

I did a bit of work at hoop-math.com to create a statistical profile of Muhammad as well:

Even though he tends to take a lot of jump shots and didn't post inspiring efficiency numbers, Muhammad is still a strong, physical player who posted 17.9 points per game as UCLA's primary scorer. Tom Ziller of SB Nation is a bit more optimistic, and he says the same expectations that caused Harrison Barnes' draft stock to drop are working in tandem with the sour NBA memories of the Rudy Gay contract extension in Memphis to depress Muhammad's ranking.

The Bucks couldn't possibly afford to pass on Shabazz if he improbably dropped to No. 15 overall, but for a guy who developed a reputation of being a bad teammate and recorded just 27 assists in 987 minutes at UCLA, you never know.

Muhammad's case is connected to Zeller's in only one way, but it's an important way: expectations for a 20-year-old sophomore are always higher than they are for a greenhorn frosh. Zeller exceeded all projections as a freshman and immediately established himself as a premium prospect by shooting 62.3 percent from the field (third-best in Division I in 2011-12) and posting a 31.3 PER. Zeller boasts a diverse skill set, excellent size, good mobility and a strong statistical resume. He didn't technically "improve" in his second year at Indiana, but he was damn good.

He's a skilled post player who's also deadly in transition. He anchored one of the best teams in the nation last season and earned second-team AP All-American honors, but scouts raised a collective eyebrow when he committed 11 turnovers and shot just 11-26 (42.3%) from the field in three NCAA Tournament games as the Hoosiers were knocked out in the Sweet 16. It's possible that NBA big men could give him some trouble at the next level, but Zeller is a very talented player. There's no way he falls near the Bucks on draft day.

The Rise of Tony Mitchell

Mitchell is a hyper-athletic 6'9 power forward who has regressed statistically while playing for an underwhelming North Texas team in the Sun Belt Conference. The 21-year-old prospect definitely has the physical talent to compete at the NBA level -- he topped Blake Griffin's 37-inch max vertical at the NBA Combine -- but questions about his offensive limitations and inconsistent effort have suppressed his draft stock.

First and foremost, Mitchell is an elite athlete. It's impossible to ignore how explosive he can be, which bodes well for his defensive potential in the NBA. He plays above the rim. He started settling for jumpers in the half-court offense more this past season without really adding to his dribble-drive game, and that's why some scouts have cooled on him a bit. Failing to dominate Sun Belt competition isn't exactly inspiring stuff. I did a bit of digging in the hoop-math.com database and put together a basic statistical profile of Mitchell's evolution at North Texas:

It's worth noting that North Texas ranked in the bottom-20 in Division-I for percentage of FGA at the rim in 2012-13, so the team clearly had some bigger personnel issues that may have impacted Mitchell's performance. It's still easy to tell that he's extremely effective around the rim. He has plenty of interesting tools that look like they could translate to the next level, and for more on his game check out his DX scouting video:

Reviews on Mitchell are mixed. He has yet to move higher than No. 30 on Chad Ford's top-100 at ESPN, but he currently sits at No. 20 on the Draft Express Big Board. Jonathan Tjarks of SB Nation recently made a compelling case for why Mitchell regressed a bit in an excellent piece on the prospect from Dallas, TX:

High-level prospects are expected to improve every season they stay in college, which is one reason so many declare for the draft right after their breakout season. Any time a player actually regresses, it's a major red flag. However, in Mitchell's case, there are extenuating circumstances. Johnny Jones, the coach who recruited him, decamped for his alma mater (LSU) in the offseason. His replacement, Tony Benford, was in his first year as a head coach. Injuries made the transition even more complicated, as the Mean Green played without their point guard and two of their best shooters for most of the season.

The pieces just weren't in place for Mitchell to succeed. Chris Jones, UNT's starting point guard, averaged 14 points, five rebounds and four assists per game on 44 percent shooting last season. He played in only 16 games this season, but he was still second in total assists. The Mean Green didn't have much outside shooting either. Brandan Walton, who shot 37 percent on 4.7 threes a game last season, missed the entire year after being injured in the first game. Jacob Holman, second on the team with 2.1 three point attempts a game, played in only 15 contests. Without Walton and Holman, North Texas shot 28.5 percent from three, 332nd in nation.

Academic eligibility issues kept Mitchell from joining a much better Missouri team, so it's not as if he wasn't heavily recruited out of high school. He's a bit of a boom-or-bust type pick, but at No. 15 it makes sense for Milwaukee to take that type of risk. Despite his Texas ties, Mitchell was actually born in Milwaukee and still has a lot of family who lives in the area.

He's not Josh Smith, but he sure looks like could become a poor-man's version of J-Smoove. I'd rather make a four-year, $12 million(ish) bet on Mitchell than a five-year, $90(ish) million one on Smith, even if the potential payoff is much lower, but that's just me.

The Evolution of the Draft Express Big Board 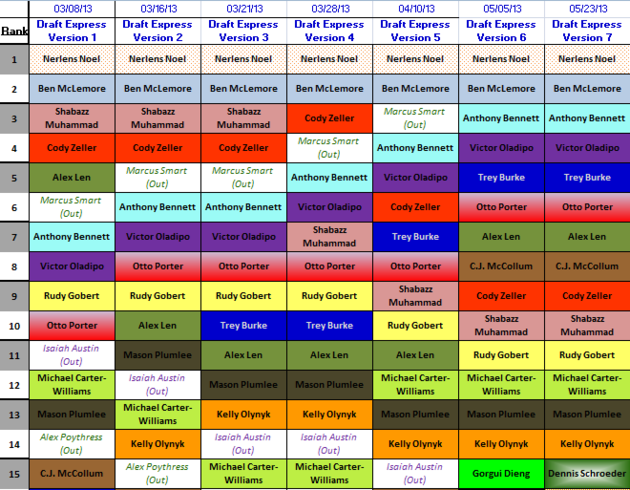 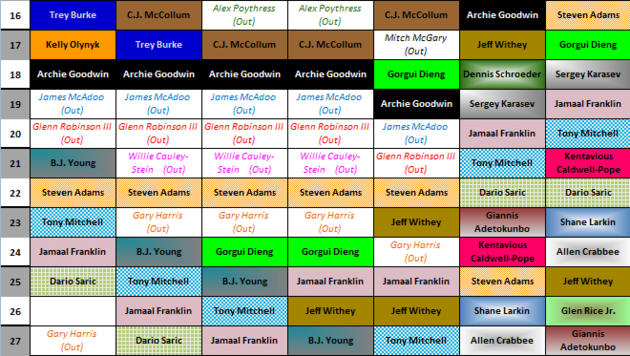