The NBA released its official cap figures on Tuesday night, clearing the way for teams to begin officially signing free agents on Wednesday. So how does the Bucks' cap situation stack up?

With the July moratorium ending Tuesday night, the NBA announced the new 13/14 salary cap and luxury tax figures ahead of teams being allowed to officially sign players on Wednesday. Both numbers come in right around where the league earlier projected them, the cap at $58.679 million and the luxury tax at $71.748 million. So no big differences from the cap estimates we've been discussing for the past few weeks.

The mid-level and other exceptions had previously been determined, though as a team with cap space, the Bucks' only exception is the "room mid-level," which is worth $2.65 million in starting salary for deals up to two years in length. Following the trade of Luc Mbah a Moute, you can check out a snapshot of the latest Bucks' cap situation below. 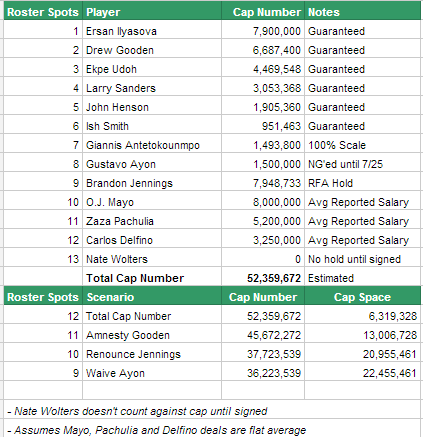 As we've done previously, this assumes the J.J. Redick sign-and-trade is completed first and Monta Ellis' $16.4 million cap hold is renounced before any signings happen. After that happens, both Redick and Ellis' cap holds would disappear and the Bucks would be able to sign O.J. Mayo, Zaza Pachulia and Carlos Delfino to their previously reported new contracts. For lack of better info, I'm assuming they just get the average of their reported salaries in year one, but if the deals are escalating you'd see a slightly smaller cap hit this season. I'm also still including Drew Gooden and the $13.4 million owed to him over the next two seasons, though the Bucks have the next week to decide if they want to use their amnesty provision to wipe him off the books (they'd still owe him that in actual money, unfortunately).

The Mbah a Moute salary dump certainly feels like it was done to enable an additional signing or trade to fill out the roster, so watch out for a move for a small forward-ish guy like Andrei Kirilenko or another big, expensive and expiring name that might be available via trade (Luol Deng? Danny Granger? I'm Ron Burgundy?). Mbah a Moute's departure gives the Bucks a little more than $6 million in cap space, so to make a big splash you would need to see Gooden amnestied to more than double the amount of cash available to the Bucks under the cap. There'd long been chatter of Mbah a Moute wanting a change of scenery, but if there isn't a follow-up deal it would feel like a strange move--those picks won't help the Bucks anytime soon (2016 and 2018), and Mbah a Moute's ability to play small forward meant that he wasn't the obvious guy to move in order to free up the self-imposed logjam the Bucks have in the frontcourt.

The other big x-factor is of course the Brandon Jennings situation, with increasing talk over the past few days that the Bucks want to go after Jeff Teague. Even Gery Woelfel is getting on that train, despite suggesting yesterday that the Bucks had upped their Jennings' offer to $11 million annually.

There is increasing chatter Bucks will make major push for Jeff Teague.

I'm hearing if Bucks can secure Teague, Jennings will be allowed to walk.

Amnestying Gooden would actually allow the Bucks to make an offer for Teague without renouncing Jennings, which in theory would be a way for the Bucks to challenge Atlanta's resolve in hanging onto Teague--without losing their backup option in Jennings. All that goes out the window if the Bucks spend the money on a small forward or don't amnesty Gooden of course, but it's an interesting scenario to consider. Amnestying Gooden also makes Ekpe Udoh less redundant and rationalizes the frontcourt numbers game somewhat in the wake of the Pachulia signing.

My assumption is that the Bucks will prioritize a higher profile starting small forward first, but that leaves that whole point guard situation (remember that?) still up in the air. Chris Broussard tweets that Monta Ellis is reportedly "choosing" between Atlanta, Dallas, Sacramento (huh?) and Charlotte (of course?), which also figures to help determine how Atlanta views the relative appeal of Teague and Jennings. I'm not sure why Jennings or Ellis would be of interest given Atlanta could keep Teague to pair with the returning Lou Williams, but if Danny Ferry wants one of the Bucks' wayward guard...well, go right ahead. The hard part for the Bucks is that we haven't seen any suitors for Jennings emerge other than maybe Atlanta, which means that we probably shouldn't expect the Bucks to recover any additional value for Jennings if they can acquire Teague. Jennings' cap hold is thus a bit of a double-edged sword: it prevents Jennings from walking until Milwaukee gets a replacement, but it's also large enough that it makes it difficult to just sign Teague outright.