Differentiating Jeff Teague from Brandon Jennings for the Milwaukee Bucks

The Milwaukee Bucks have signed free agent point guard Jeff Teague to a lucrative offer sheet. Here's a look at what the young Hawks guard would bring to the Bucks if Atlanta declined to match the offer sheet.

Share All sharing options for: Differentiating Jeff Teague from Brandon Jennings for the Milwaukee Bucks

It's an odd moment in time for Milwaukee Bucks fans. Attitudes toward Brandon Jennings have calcified. We've digested the details of his game for years, and after articulating his faults it's unsurprising that we're a bit apathetic regarding his struggle to drum up interest from rival NBA teams as a restricted free agent. In the absence of encouraging results -- at the team level and the individual level -- familiarity has bred a certain degree of contempt for BJ.

In the same instant, a four-year, $32 million offer sheet signed by Jeff Teague has opened up new possibilities in largely uncharted territory. What might Milwaukee discover if Atlanta decides not to match the offer? Hell, what happens if the Hawks do match and Brandon Jennings is still hanging around?

It feels like the Bucks have been fiendishly pumping quarters into the "Brandon Jennings Star NBA Scorer" slot machine for four years straight, but at some point, when nobody in the front office was looking, the jackpot value secretly reversed course and started to creep downward as the Bucks continued to pursue the big payoff. The offer sheet to Teague marks an important change in strategy. It may not mean the organization has branded Jennings a cypher in the NBA world, but it does suggest they've noticed the diminishing returns on the play for a jackpot. The question is: why did they opt to pursue Teague? Here's an extended comparison of the two players, because it's still reasonable to think that Milwaukee could end up with either one of them at point guard next season.

Similarities on the Surface

Before I launch into a deeper discussion on Teague, here's a basic comparison of the career numbers:

There's not a lot to justify a love for Teague over Jennings in these stats. He's a more efficient scorer, but Jennings has carried a significantly heavier burden on offense since both players entered the league in 2009-10. Perhaps that doesn't excuse Brandon's poor shooting accuracy and crippling inefficiency, but it's important to note that he played a prominent role on offense at the behest John Hammond et al. There's a general understanding that players score less effectively as their offensive responsibilities (usage rate) increase, so who's to say that Jennings couldn't put up comparable shooting numbers as a tertiary option?

Before you get too worried about the "what ifs," I want to note that Rob Mahoney of The Point Forward blog at Sports Illustrated endeavored to differentiate Jennings from Teague in a recent post, and he concluded that Jeff holds an advantage in all three major categories of performance: offense with the ball, offense without the ball, and defense.

To find the real reasons why we should be excited about the latest Bucks development, we need to drill down a bit farther to explore their divergent styles of play.

Let me cut right to the chase. Jeff Teague has flashed a level of functional athleticism and raw aggression in the paint that Brandon Jennings hasn't even bothered to dream about. Teague can play above the rim. Jennings cannot. If you need proof of the gap between the two players, check out this highlight mix of Teague:

A highlight video is bound to be a bit misleading, so here's a look at the career shooting numbers for both players to bolster the claims I made above.

The key points are that Teague has taken a significantly larger percentage of his shot attempts in the paint (62.1% vs. 40%) and he has finished better around the rim (57% vs. 48%). Those are outrageous splits! Where Jennings tends to settle for a mid-range jumper or a fall away shot with a small chance of going in, Teague pushes on to the painted area. Isn't that exactly what we've wanted the point guard to do more of in Milwaukee?

Much like Jennings, when Teague's good, he's really good. As noted at Peachtree Hoops, this past season he recorded 10 games in which he logged 20+ points and 10+ assists -- only LeBron James (13 games), Tony Parker (12), Chris Paul (11), Deron Williams (11), and Stephen Curry (10) were able to keep pace. The issue for both players is consistency, but if forced to make a choice on which guy will turn out more quality games, I like Teague's willingness to attack the paint more than Jennings' occasional Midas touch from outside.

Here are the shot charts for both players from 2012-13, via the advanced stat media tool on NBA.com/stats: 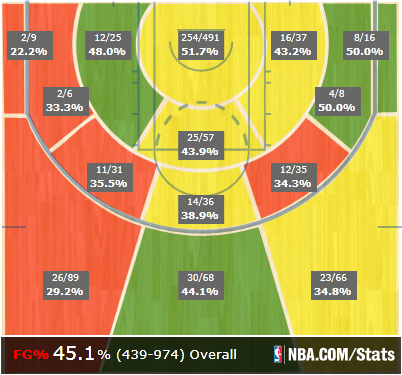 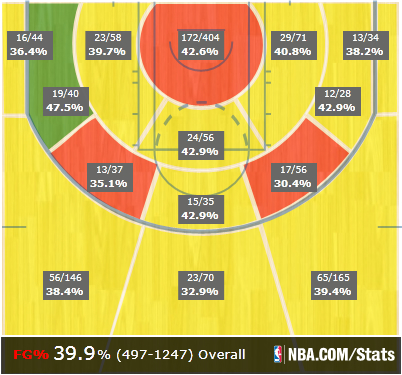 This one feels like a no-brainer for Bucks fans. We've all witnessed the complete disintegration of Brandon's defensive technique over the past two seasons, which culminated in some truly embarrassing +/- numbers this season. Excellent defensive big men like Andrew Bogut and Larry Sanders have played behind Jennings for the entirety of his career, so there's no way to excuse his poor play on that end of the floor.

BJ routinely failed to prepare himself for picks on the perimeter, he neglected to fight through those screens, and he usually wound up in a trail position, poking helplessly at the ball from behind. And that's really the only best to describe Jennings on defense: left behind.

Teague is a slightly different story. He impressed plenty of people when he matched up with Derrick Rose in the 2011-12 NBA Playoffs. He played a physical brand of basketball and used his athleticism to impact the game. Unfortunately, he horrified plenty of people during a disastrous series against the Pacers in the 2012-13 NBA Playoffs. Mahoney didn't exactly offer a ringing endorsement of his D, but things are still better than what BJ had been offering:

Teague isn't a plus defender by any means, but he works to keep his man in front of him and seems to understand the value of blocking off driving lanes to the rim. Where he comes up short is in a baseline intuition. Teague struggles to sift through the fakes and moves that the league's sharpest scorers employ, though in that he's merely as dupable as a run-of-the-mill NBA defender. Contenders can get by with merely passable defensive pieces on the perimeter, and Teague's relative inexperience at least leaves room for considerable improvement.

The end-of-season review at Hawks/Hoop of ESPN's TrueHoop Network cuts a bit into the "passable" grade issued by Mahoney, which is perhaps a cause for concern:

Jeff has the athleticism to be a decent defender, which was reflected in his one-on-one defense, where he usually effective. Any play involving a screen or off-ball movement, though, saw Teague as lost at a five year old wandering a grocery store. He was hesitant to go through screens and teams with good shooting point guards were able to take advantage. Smith and Horford are as good as you can get as clean up guys on defense, but even they couldn't rectify all of Teague's mistakes.

At the very least, we know that Larry Drew is aware of what Teague needs to work on when it comes to defense. Part of the decision on extending an offer sheet is that it instantly lends credibility to the strength of the player-coach relationship those two developed in Atlanta. There's something both sides think they can build on for the future. The hope would be that Drew could coax Teague to transform passable into something better over the next four years. I wouldn't even know where to start with Jennings.

The decision between Jennings and Teague isn't necessarily simple, yet Milwaukee's priority of action is now clear. Brandon is two years younger and has already collected a bigger set of eye-popping scoring lines, but his limitations feel important because they may be linked to his small stature, slim frame, and finesse style. Teague started his ascent as an NBA point guard later in his career, and he has learned more about how to tap into his aggressiveness and athletic ability with each passing year. He's managed to refine his game quite a bit since starting a combined 10 games over his first two seasons in the association.

Teague's above-the-rim ability, knack for getting into the paint, and higher baseline level for defense give him the edge over Jennings, in my opinion. Neither player is a perfect point guard, but the mission for the Bucks under their current plan should be to position the roster with the best mix of flexibility and future potential. Jennings has his advantages, but a team needs to be constructed in a very specific way to get his best basketball to appear. Teague has the tools to fit a more traditional role, so he's not a player you have to build a custom team around to make things work.

The (presumably) lower price tag on Teague may have been the tipping point for the decision. Could Milwaukee ever really max out Jennings' potential or get him to break his bad habits if a lucrative extension reaffirmed his role as a scorer and cut into the future flexibility of the team? Teague may simply fit the more traditional role of "point guard" better than BJ, which is a factor that can be valuable in its own right.

The Bucks have tipped their hand on which point guard they prefer as a future asset on a second contract. Now the Hawks will ultimately decide how Milwaukee's backcourt will be constructed. It could still be Jennings at PG. It could become Teague. John Hammond has decided to focus on the acquisition of Teague. I'm happy to say that the decision makes sense to me.