A day before his deal was set to become guaranteed, Ayon became the fourth member of the Bucks' 12/13 big man rotation to be shown the door.

The seldom-used Ayon became the newest former Buck on Thursday after Milwaukee requested waivers on the 28-year-old Mexican big man, clearing his $1.5 million salary from the Bucks' books. Ayon was hardly dead weight at that price and shouldn't have a hard time latching on somewhere in the NBA even if he clears waivers, but the Bucks never showed much interest in making use of him after he arrived as part of the illl-fated J.J. Redick/Tobias Harris trade last February. The Bucks' glut of big men certainly had something to do with it, but you never got the impression that the Bucks liked Ayon quite as much as basketball geeks (this one included) did.

Ayon's departure leaves the Bucks with five big men (Larry Sanders, Ersan Ilyasova, John Henson, Ekpe Udoh, and Zaza Pachulia) and nine total players under contract (totaling $39 million). However, that figure doesn't include unsigned rookies Giannis Antetokounmpo (who has a $1.5 million cap hold until he signs) and Nate Wolters or restricted free agent Brandon Jennings ($7.9 million hold). Assuming the Bucks renounce Marquis Daniels ($884k cap hold, which according to Sham Sports is still on the books), the Bucks would have one additional $490k cap hold because they're one short of the minimum 12 roster spots. That would leave them with $9.7 million in cap space: 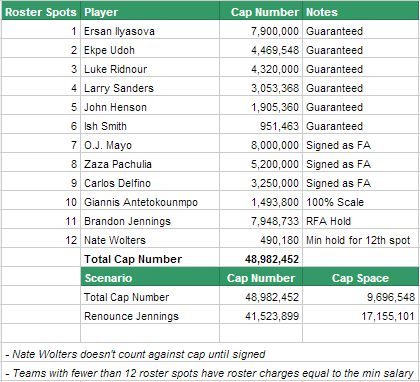 How the Bucks will (or won't) use that cap space remains rather unclear. Beyond re-signing Jennings or otherwise acquiring a starting PG, the Bucks have three additional roster spots they could fill, with depth at the swingman spots the most obvious position of need. But aside from Bobcats restricted free agent Gerald Henderson (meh), there's not much of note left via free agency, which leaves a trade (where the Bucks would be able to absorb close to $10 million in salary) as the more practical route for making a major splash. Danny Granger? Luol Deng? Rudy Gay? I hesitate to even mention specific names, but speculate away. Or, perhaps more reasonably (and possibly for the best), there may be no big splash whatsoever.

The ironic part is that the Bucks would now seem in need of at least one big body for depth purposes as well--you know, someone decent and cheap like Ayon. Though the Bucks were overloaded at the big spots last year, they've now gotten rid of four bigs from last year's roster (Ayon, Drew Gooden, Joel Przybilla, Sam Dalembert) while adding just one (Zaza Pachulia). I'll hold off final judgment until the Bucks have sorted out how exactly they're going to finish out their roster, but today's move certainly doesn't bring us any closer to that.