The Bucks have cap space and the Warriors are looking for help getting under the cap in order to make a run at Dwight Howard. So do the Bucks have an angle in all of this? Don't hold your breath.

UPDATE: The Bucks are not among the teams reportedly in talks with the Warriors, while latest Twitter buzz suggests the Rockets may be the favorites for Howard's services.

Source says the Warriors are sending Andris Biedrins, Richard Jefferson to the Jazz. Checking on what they're getting back.

News of the Warriors' late charge in the Dwight Howard sweepstakes raised more than a few questions on Thursday about how the Bucks might be able to use their remaining cap space to facilitate the Warriors clearing the necessary cap space to actually sign the former Laker and Magic superstar outright. So let's sharpen our salary cap pencils, put on our rational thinking caps and figure out if there's anything to it, OK?

The math says that the Warriors need to dump the expiring salaries of Andrew Bogut ($14m), Andris Biedrins ($9m) and Richard Jefferson ($11m) in order to open up the cap space needed to sign Howard outright. All of that has enterprising Bucks fans wondering if Milwaukee's remaining cap space might be useful: surely the Warriors would be willing to give up assets (Picks? Harrison Barnes? Klay Thompson) to a team that makes the signing of Dwight possible, right? We don't even know if Golden State is or was willing to deal any of those assets, but if they're serious about Howard there's virtually no way they can keep all of them.

The obvious problem for Milwaukee is that they don't have anywhere close to the $34 million in cap space lying around to take on all three, and that's without even considering the fact that Bogut isn't coming back to Milwaukee no matter how you slice it. That's probably why Ken Berger reports the Warriors reached out only to the Cavs, Jazz and Hawks earlier this week, all of whom have more cap flexibility to offer. The other interesting wrinkle from Berger is that Golden State is hopeful of cutting its cap obligations regardless of Howard's decision, with Andre Iguodala considered a possible consolation prize. The latter shouldn't be underestimated, though it would seem odd for the Warriors to give up one of their best young players in order to sign just Iguodala (who I like!).

Bogut's obvious value at this point should be to a contender who can dust him off as a defensive presence in April and May, so even if the Bucks did get involved somehow, you'd have to expect Bogut ends up with a third team that can actually use him. Fortunately for Golden State, Bogut is still an attractive commodity for the right team, so moving him would seem possible, though doing it without taking back salary is a bit trickier. Word is the Jazz are the most likely destination if he is dealt, which makes sense since they have a ton of cap space to absorb his salary and there's plenty of love in Utah for the former Ute. Ironically, their best options otherwise would seem one of the other teams courting Dwight (Dallas, Houston, L.A.), but for now it doesn't seem like anyone is relenting on Howard just yet.

All told I'm rather skeptical the Bucks can worm their way into a deal--if there even is one--though it's worth asking what they might be able to do. After all, the best use of cap space for small market teams is often situations precisely like these--where one team is so desperate to clear salary that they're willing to part with players who otherwise wouldn't be available. So what might the Bucks be able to do? Below is the quick math as of now on how the Bucks' cap situation will look on July 10 after they complete the J.J. Redick sign-and-trade deal (which will clear Redick's cap hold). I'm ignoring Monta Ellis' $16.4 million cap hold since any cap space the Bucks might have is predicated on him walking. 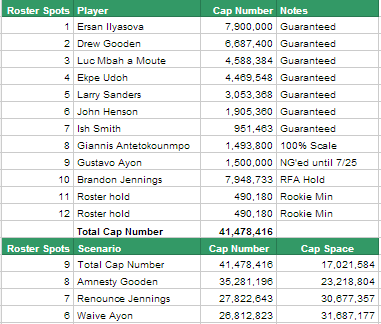 The bottom line is that the Bucks effectively have around $17 million in cap space before you start to play around with different scenarios. The obvious guy not listed above is O.J. Mayo, who figures to take a huge chunk of that $17 million if and when he actually signs. Why there's been no talk of a deal being closed since Wednesday is anyone's guess: Did people take July 4th off? Is one of the sides getting cold feet? Are the Bucks tinkering with other scenarios and holding off until those clear up?

So let's put Mayo aside for the moment and think about what the Bucks would have to do in order to get the Warriors' attention. Odds are it's pretty simple: eat the salaries of Biedrins and Jefferson, which along with a separate Bogut deal would mean the Warriors have the cap space to sign Dwight. Both deals are expiring, but that's about $20 million of 13/14 cap space being eaten up by guys who basically don't play anymore...which is precisely why any team eating those deals will presumably start by asking for a minimum of two assets as sweetener. The Warriors with Dwight and Steph Curry would likely be picking in the later portion of the first round for the foreseeable future, so the pieces to go after would be Barnes or Thompson or multiple first round picks. I seriously doubt Golden State would cough up both Thompson and Barnes--they need someone to play with Dwight, Steph and David Lee--but let's say the Warriors are willing to cough up Barnes to push Biedrins and RJ out the door. Barnes has the skill and physical tools to be a high quality starter, but keep in mind that his rookie year was fairly below-average by most every measure of productivity. He had some really nice moments in the playoffs, but he's a nice young asset, not a franchise player.

But could the Bucks even make a deal work cap-wise? The Golden State trio's total salaries add up to right around $23 million, meaning the Bucks would need to NOT sign O.J. Mayo and then either amnesty Drew Gooden or renounce Brandon Jennings (ie he's gone and no sign-and-trade) in order to absorb those three without sending any salary back. Technically they'd have to send something back for CBA reasons, though that's where it's possible to do a ton of different permutations. It could be as little as a second round pick (hey, the Bucks have a bunch of those now!) or an actual asset like former Warrior Ekpe Udoh or Luc Mbah a Moute (but probably not both, again because Golden State is trying to shed cap space). Again, it's such a weird deal with motivations beyond the players involved in the deal that it's rather difficult to gauge what is actually fair.

For the Bucks, I just don't see Jennings being renounced as a reasonable scenario, which is both understandable (he's an asset who at worst has value in a sign-and-trade) and scary (I can't see him accepting less than $10 million without a public spectacle, which is silly but...yeah). As for Gooden, he's mostly just a contract at this point, and amnestying him will almost certainly cost them the full value of the more than $13 million left on his deal that expires in 2015.

But let's say you amnesty Gooden, which has to be decided by next Wednesday when the moratorium ends. Then you'd have around $23.2 million to play with before a Mayo deal (and including Jennings' RFA hold). In theory you could absorb the Warrior contracts in that scenario, but you'd likely need to move both Udoh and Mbah a Moute without taking additional salary back and possibly waiving Gustavo Ayon in order to also sign Mayo. Or you could just take picks back from Golden State (ie no Barnes or Thompson) and need less cap acrobatics to still sign Mayo. It'd be much easier to take on just one of Biedrins or Jefferson, but obviously the Warriors would prefer to do everything in one deal if possible and it's not clear how much the Bucks or any other team could get for just taking one of them (a first round pick and maybe a lesser piece like Brandon Rush?).

In short, there will likely be paths of less resistance for the Warriors--ie dealing with the Lakers directly--and my guess is that if the Mayo deal is still on, that will on its own derail any chance of swinging a mega-salary dump like this. The worry for the Bucks is two-fold: First, we'd all like to think the Bucks could swindle some future assets out of teams needing to dump salary. Right now the Bucks' offseason seems stuck in neutral--are they still trying to win games or is their inaction part of a rebuild?--but it's not too late to make a move that nabs some young assets for the future using their cap space. Aside from grabbing picks or a young player, the appeal of something like the Warriors deal is that all the bad contracts are expiring, so Milwaukee would be in position to have flexibility again next summer when re-signing Larry Sanders becomes a top priority.

Second: they may well be ready to overpay for Mayo, who in the grand scheme of the NBA universe is more of a $6 or $7 million guy despite the fact that he's still only 25 and has been reasonably productive as a starter, even if advanced metrics cast doubt on his true upside. We haven't seen what others have been willing to offer him (if anything), but deals for Redick and Kevin Martin (four years, $30 million) set the market for a guy of Mayo's caliber. The presumption is that a Milwaukee premium will be needed to bring in Mayo, though, so it's probably not unreasonable to prepare yourself for a deal approaching $9 or 10 million per season. Let's hope that pessimism is unfounded, but for now? Stay tuned.