The Milwaukee Bucks have reached an agreement with shooting guard O.J. Mayo on a three-year, $24 million deal.

The Milwaukee Bucks and 25-year-old shooting guard O.J. Mayo have agreed to terms on a three-year, $24 million deal, according to multiple sources. The signing will not be finalized or announced until July 10th due to the moratorium around the league, but it's already safe to say the Bucks have a new starting shooting guard for 2013-14 and beyond. There's nothing much to see here, at least in terms of any seismic shift to what Milwaukee is doing. Mayo has established himself as an average shooting guard in the NBA and the Bucks managed to sign him to an average free agent deal. Here's what you need to know.

Mayo will provide value to the offense as a floor spacer and a three-point threat. He is a very solid shooter from deep (career 38.2% 3PT) coming off his best year from beyond the arc (40.7% 3PT), but his career true shooting percentage (53.6% TS) is nearly identical to the league average (ex: NBA average in 2012-13 was 53.5% TS). He's not the creator that Monta Ellis was for Milwaukee, but he's a more credible threat from the perimeter and there still could be upside to his game.

Unfortunately, Mayo isn't known as a particularly good defender, he doesn't fare well under most advanced statistical models, and when his production is viewed holistically there isn't a lot of value he provides. Mayo has never posted a Player Efficiency Rating (PER) above 15 -- which is scaled to be the league average rating -- and during his "breakout" season with the Mavs the team was +4.1 pts/100 poss when he was off the floor and -1.7 pts/100 poss when he played.

Here's an interesting bit of analysis from SB Nation's Mavericks blog, Mavs Moneyball, where the writer decided to dig through the Basketball-Reference database and use career PER values from similarly-situated players to project the possibilities for Mayo going forward in his NBA career:

The mean of Mayo's distribution was 13.7748, with a standard deviation of about 3; meaning we can most likely expect Mayo's PER to average out to be somewhere around 13.8 for the rest of his career, while there's a 66.7% chance of him averaging a PER of anywhere between 10.8-16.8. Here's what that distribution looks like: 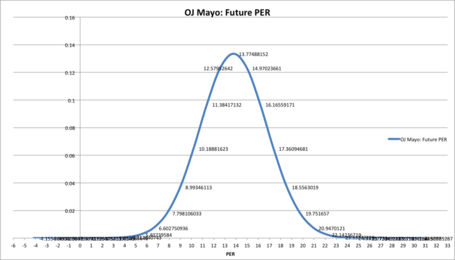 Probabilities based off of this distribution:

Likelihood that Mayo gets significantly better (PER greater than 17): 15.62%

Likelihood that Mayo gets significantly worse (PER below 13): 39.74%

Under this analysis, there's about a 60% chance Mayo will plateau or regress from his performance last year. The Bucks are certainly hoping things go a different way, and given that the bar isn't set particularly high anyways, it's easy to see why the Mavericks were ready to move on. As long as $8 million per year for a complementary player doesn't bother you, it's a decent situation for the Bucks:

O.J. Mayo will never be the star he was drafted to be, but he has re-made himself into a nice complementary player.

The hope for Milwaukee is that Mayo emerges as an efficient option on offense, while Larry Sanders cleans up his mistakes on the defensive end of the floor. Hey, it could happen:

@StevevonHorn No, I think he is MOST likely to max out his value in such a situation.

Frank provided us with some additional analysis of the pending marriage between Mayo and the Bucks earlier in the week:

In Dallas he re-emerged as a starter with the best basketball of his career before the all-star break (17.1 ppg, 4.3 apg, .463/.413/.856), but tailed off in the season's second half (10.9 ppg, 4.5 apg, .417/.392/..667). The biggest lowlight came in an April loss to his former club, after which coach Rick Carlisle unloaded on him to reporters about a perceived lack of effort and intensity. Mayo accepted the criticism and Carlisle later offered a bit more color to his tirade, but the episode underscored the good and the bad that comes with Mayo. He's talented, but leaves you wanting more.

If you think he's going to derail the Bucks' from accidentally tanking...probably not. If you think he's a long term core piece...nope, he's not that either. Instead, he's a capable NBA starter, but not someone who will prevent you from looking for better options.

At $24 million over three years, it's hard to get too excited. But with Mayo's youth and steady shooting, it's also hard to get too worked up about the situation. Hey, at least the Bucks didn't end up with Monta on an expensive long-term deal.