Free Agency Rumors: The Brandon Jennings delusion becoming real (?), Monta Ellis courted by Kings, the many side of Zaza

A day after news broke of a potential Brandon Jennings/Jeff Teague swap, all was quiet between the Hawks and Bucks. But will it stay that way?

Share All sharing options for: Free Agency Rumors: The Brandon Jennings delusion becoming real (?), Monta Ellis courted by Kings, the many side of Zaza

Woelfel: Bucks anteing up for Jennings? In mix for Gary Neal?
No additional news to report on the supposed Jeff Teague/Brandon Jennings double-sign-and-trade spectacular that Marc Stein first reported in the wee hours of Monday morning, and if you're holding out hope of Brandon Jennings not being the Bucks' starting point guard come November...well, hope may be all we have left. While the two teams may or may not still be talking about swapping floor generals, Gery Woelfel threw shivers down the collective spine of Bucks Nation with this ominous tweet Monday morning:

Jennings demanding $12M a season; Bucks starting to cave and are offering just over $11M.

Let's pray this is some misinformation being spread by Jennings' agent, because damn is that a lot of money for a) someone whose ability to positively impact basketball games was put in doubt last season and b) a guy that no other team seems interested in even chatting up about a possible deal. Woelfel adds some color to the Bucks' dilemma in his latest piece at the Journal Times:

Jennings and his agent, Jeff Schwartz, apparently believe he's better than Curry, Lawson and Holiday. Some league officials claim Jennings is seeking a contract that would pay him $12M a season.

The speculation is that Hammond doesn't believe Jennings is worth that amount and thus is more receptive to moving Jennings in a sign-and-trade deal than he's publicly letting on.

Of course, if the Bucks unload Jennings, they'll need someone to replace him. The Bucks had expressed interest in ex-Golden State veteran guard Jarrett Jack, but he has made a verbal commitment to sign with Cleveland.

The Bucks are also believed to have had serious discussions about pursuing Atlanta's Jeff Teague, a restricted free agent who is a good friend of former Hawks and current Bucks coach Larry Drew.

All this leaves the Bucks with precious few options other than a) trying to sign him outright or b) attempting the negotiating acrobatics required to sort out a double-sign-and-trade with Atlanta for Teague. Which we should recall would require no less than all four parties come to three separate, mutually acceptable agreements with one another (Teague/Bucks, Jennings/Hawks, Bucks/Hawks). Nothing easy, friends.

Like many who have grown weary of Jennings on and off the court, I wouldn't mind starting fresh with Teague--especially if he were even marginally cheaper--but the odds of everything lining up just right still seems like a long-shot. Moreover, motivating all sides to get a deal done likely results in both players getting a premium over what they might have to accept if their own teams simply waited them out. In summary: prepare yourself for Jennings to be back (sorry!), and don't expect it to be on a bargain contract (sorry! again!). Over at CBS Sports, our friend Matt Moore summed up the Jennings madness rather perfectly:

If Jennings manages to pull this off, he should write a book. It will become the new How to Win Friends and Influence People, only this time it's How to Get Paid $12 Million Per Year Shooting 40 Percent From the Floor.

I get agitated even thinking about a leverage-less Jennings coaxing that kind of money out of the Bucks, so for now I'll just breathe deeply and try to stay calm.

As for the rest of the Bucks' roster, Woelfel also tweeted that the Bucks were one of four teams still in the mix for former Spurs guard Gary Neal, who could fill the vacant backup combo guard slot that Beno Udrih filled the last couple years. Neal's shooting tailed off this season and the Spurs were notably better with him on the bench, but he's a capable gunner who was rather solid in his first two seasons in San Antonio and would provide additional floor spacing and some versatility to a backcourt in need of both.

UPDATE! Stein is keeping alive the Teague dream (which, let's be honest, is rather modest as far as dreams go)...for now:

As state for days, Bucks want Jeff Teague. That's undeniable. Still TBD: Are Hawks ready to take back Jennings OR Monta in sign-and-trade?

Sacramento, of course, still trying to convince Monta to commit to Kings. @Vivek can amnesty Salmons to help with creating more cap space

Ellis' final destination could prove rather important for the Bucks, and not just because they might be able to squirrel away something (more second round picks!) through another sign-and-trade. If Ellis ends up in Atlanta, it'd be difficult to imagine any scenario where they follow through on trying to acquire Jennings, though it would be hilarious if they did. As Stein notes, if the Hawks want Ellis you could see a S&T deal sending Teague to Milwaukee for Ellis. On the flip side, Ellis landing in Sacramento would keep a potential Jennings/Teague move in play.

Caponomics: Latest Bucks' cap scenarios
Based on the average annual salaries reported in the media for O.J. Mayo, Zaza Pachulia and Carlos Delfino, here's my best estimate of how the Bucks' cap situation will look on Wednesday once the J.J. Redick sign-and-trade deal is complete. I'm still including the Jennings' cap hold until further notice, and note that with Jennings the Bucks' roster would already be at 14 guys. The big x-factor from a cap space perspective is whether the Bucks amnesty Drew Gooden by Wednesday's deadline--doing so would add close to $7 million to the Bucks' projected cap figure, but it's also unclear what they might use that on, especially with only one roster spot to fill. Note that the Bucks also have the $2.65 million "room" exception at their disposal, which can be used for deals up to two years in length. 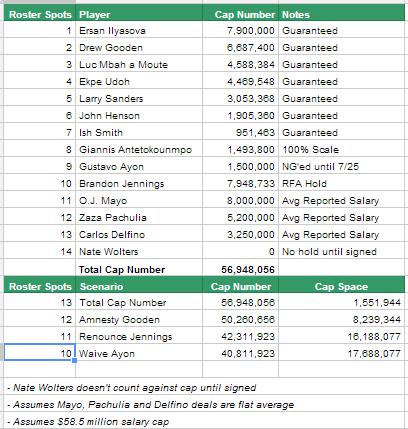 Milwaukee’s Fashion Hope: Zaza Pachulia
Even if you think the Bucks overspent on their new (but also old) Georgian bruiser, take heart in the comedy Zaza will bring us all year. He's fashionable (see link above), is already doing good things for Carlos Delfino's self-esteem (see tweet below) and he's also the perpetrator of one of the greatest mic-hijackings in NBA history (see video below). If watching the video below doesn't make you lust for a low playoff seed and a chance at a game seven, I don't know what will. Also, it may remind you of Sloth from Goonies.

Best part of playing with the Bucks is @zaza27 will be next to me a show everyone I'm just #2 in the #bigheads ranking!!! LOL #missingYao