The Milwaukee Bucks restructured their roster during the offseason, but did their offense get any better? A quick look reveals that there are more questions than answers heading into the 2013-14 NBA season.

Share All sharing options for: Building the Bucks' offense, Pt. 1: Confronting the uncertainty

In the aftermath of a busy offseason for the Milwaukee Bucks, it's time to evaluate what all of the upheaval might mean for the team. Four of the top-five scorers from last season -- Brandon Jennings, Monta Ellis, Mike Dunleavy and J.J. Redick -- are gone, but breaking up a squad that ranked 21st in offensive efficiency isn't exactly a cause for concern. Larry Drew is more approachable than Scott Skiles and more competent than Jim Boylan, but in 2012-13 he coached a Hawks team with more talent to a 15th overall finish in per-possession scoring. I'm not sure he's a miracle worker.

The veneer of swag has been stripped away and replaced with a more humble façade, but it's dangerous to equate any of that with addition by subtraction. When it comes to offense, the current roster is built to inspire something less than confidence.

The recent investment in Larry Sanders all but guarantees that defense won't become a major issue for Milwaukee, but he and John Henson should not be relied upon to provide a scoring punch. They could both stand to learn something from Zaza Pachulia, but that's not meant to be a compliment to anyone. Luke Ridnour, Gary Neal, Caron Butler and Carlos Delfino have all worked hard to carve out a consistent role in the NBA, but they figure to be pushed at least one rung higher than where they should be in the offensive hierarchy.

There's one inescapable conclusion that emerges when you sift through the roster: Ersan Ilyasova and O.J. Mayo are the two best offensive players on the Bucks. It's great to see two young players at the crest of that list, but the view from the top isn't high enough to get a good perspective on the rest of the league.

If you only looked at Ersan's (terrific) production from last year and never observed him struggle to do anything off the dribble or in the post, you might be able to get excited about a higher usage rate. If you only paid attention to the first half of O.J. Mayo's final season in Dallas and never noticed that he turned the ball over on more than one fifth of his possessions as a pick-and-roll ball handler, he'd make a bit of sense as a reliable primary scorer for the Bucks. But alas, even the best offensive players come fully-equipped with flaws on this team.

Don't believe me? Once you attempt to rank the offensive talent on the Bucks, my bet is that you'll change your tune. In the interest of exploration, I asked the Brew Hoop brain trust to do exactly that.

Dan Sinclair, Frank Madden, Jake McCormick, Mitchell Maurer, Eric Buenning, and I ranked each player on the roster according to offensive value, which I told them means: using more offensive possessions for that player gives the team a better chance to win. The rankings were developed independently (we didn't get to see what other people had developed before posting our own list), and here's what we produced: 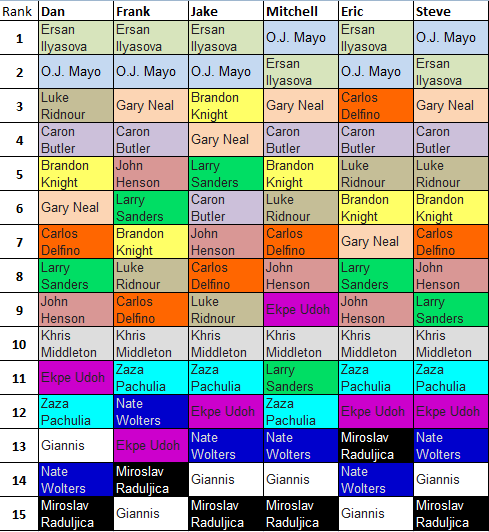 We basically agree on the following things:

Those lists, and the companion conclusions, may look like a garbled mess, but all hope is not lost! This is merely the preliminary step in a preview series designed to illuminate the possible structure of a new Bucks offense. I intend to dig into the stats, including shot charts and play-type data, to identify areas where each player can offer some measure of value. The process will hopefully reveal a more manageable offensive structure.

Just for fun, here are the comments that Frank sent me to accompany his rankings (with a bonus Ish Smith section I kept because it's awesome):

PRETTY DAMN GOOD!
1. Ersan - Nobody thought he'd hit 45% from deep two years in a row, but he did--and on even higher volume last year. While not a shot-creator per se, he's a clever pick-and-pop artist who's been crazy efficient two years in a row. No one else on the roster can claim anything close to his numbers, now we just need to see it for a full season. Could break out this year if he plays well from the start, or maybe mean regression kicks in and he sinks back to more human perimeter shooting numbers.
ENTERING THE BLOB OF UNCERTAINTY
2. O.J. Mayo - Spreading the floor is good, and Mayo has always been able to do that. I may not be dinging him for his turnover issues enough by ranking him second, but I'd say he's currently the odds-on favorite to lead the Bucks in scoring and *might* be able to do it semi-efficiently, too.
3. Gary Neal - Neal can actually shoot off the bounce, which is a major plus for a second-unit guy who will be expected to deliver points off the bench. His numbers slumped last year amid injuries, so the Bucks are no doubt hoping he can return to the form he flashed in his first two seasons.
4. Caron Butler - He is definitely not what he was (20/5/5!) but middling efficiency, floor-spreading and a low turnover rate are enough to rank pretty highly given his teammates' underwhelming offensive abilities. Figures to take on a bigger scoring load than the last two years in L.A. which should make him a top 2-3 scorer for the Bucks. But will that be a good thing?
5. John Henson - I'm not swigging the Kool-Aid as much as many (I can't get over his heinous 49% true shooting last year), but I could definitely see him figuring things out a bit after a woefully inefficient rookie season. Fewer jumpers and 60% free throw shooting would be a big plus. As the only guy on the roster with inside scoring talent, his development is critical to building a more balanced scoring attack.
6. Larry Sanders - I don't have any expectation that he'll ever be more than a garbage-and-roll-man, but if he can be 75% of what Tyson Chandler is that'd be pretty great. Let's hope that he doesn't take a big extension as an obligation to shoot more.
7. Brandon Knight might be the toughest guy to peg--he's been a low-efficiency scorer with limited playmaking ability in his first two seasons, but he's still young, has one undeniable NBA skill (perimeter shooting) and he'll have the ball a ton.
8.Luke Ridnour - Could jump out of the blob if he replicates his 09/10 or 10/11 seasons, but he'll have to start hitting three pointers again first. One consistent go-to: can always run the P&R and nail long twos as a bail-out guy.
9. Carlos Delfino - I don't expect him to repeat his true shooting surge of last year, but floor-spreaders always help and he moves the ball. Entry-passing is a skill! I'm deducting points given he's coming back from a foot injury and may not be ready for opening night.
10. Khris Middleton - He figures to see minutes given the questions about Delfino's health, but he's never been a good marksman nor does he have top-shelf athleticism. Word is he can create shots off the bounce, but I'll wait until we see it on the reg. Many people consider him a sleeper (cool), but he also has the potential to be another CD-R-type who people get excited about because he's young and lose interest in when we realize he's not very good.

THRASHING ABOUT IN THE BLOB OF IRRELEVANCE
11. Zaza Pachulia - Low-usage guy who knows his role--he won't be particularly inefficient, but won't add anything either.
12. Nate Wolters - He was a prolific one-man gang in college and seems to have the BBIQ to be a quality role-player in the NBA. But minutes are likely to be scarce early on, and I'm not one for expecting real contributions from second round rookies. In other words: he'll probably be more effective than Knight while playing 1/10 the minutes.
13. Ekpe Udoh - No one's sure what his role will be on this year's team, or if he'll even be a part of it by the time camp rolls around. But Udoh's always been a low-usage, low-efficiency guy who does some little things well...just not well enough.
14. Miroslav Raduljica - Has a rep as a semi-capable offensive player, but I'm not expecting tangible NBA contributions this year--or playing time for that matter.
15. Giannis Antetokounmpo - We all have high hopes for Giannis, but I don't see how he can be a useful NBA player right out of the gate. His passing and ball-handling figure to be assets in time, but I'm not expecting it to come through this season.
**BONUS THAT I INSISTED ON KEEPING** SUFFOCATING IN THE BLOB OF ISH SMITH
Infinity. Ish - I'll admit to having a weird soft spot for Ish, which is odd since he might be the worst offensive point guard in NBA history. A career 39.8% true shooting mark and -1.3 offensive win shares suggest it's quite possible.

Now it's your turn to rank the players on the roster. Let us know what you think in comments.