It might be impossible to save the offense of the 2013-14 Milwaukee Bucks, but there are actually a few bright spots on the defense that present some hope for the future.

After exploring the debacle that is the Bucks' offense a bit earlier this month, it's time to take a look at how the defense has performed with and without different players on the floor through the first 40 games of the season. Some of the stats aren't very surprising; others are quite jarring. The Milwaukee Bucks have a below-average defense, but the profile of the team looks a lot different than it does on the other side of the ball. The combined length of the roster helps generate a greater advantage on defense, so it's worth taking a closer look at these stats and highlighting interesting tidbits.

When O.J. Mayo is on the floor, the team defense gets worse. No surprise there. The same goes for Gary Neal, Caron Butler, and Miroslav Raduljica. These are not shocking revelations. On the other end of the spectrum, Nate Wolters provides a surprising boost to the defense. When Larry Sanders can stay on the floor, he also predictably makes it more difficult on opposing offenses.

We will discuss these things in greater detail on the other side of the chart. It's worth mentioning again that the data is imperfect, the sample sizes are small, and that the content is more descriptive of past events than predictive of future ones -- and all of this is further complicated by the hundreds of permutations of team lineups. With all of this in mind, let's take a look at the defensive on/off splits for the Bucks. Stats come from NBA.com/stats. 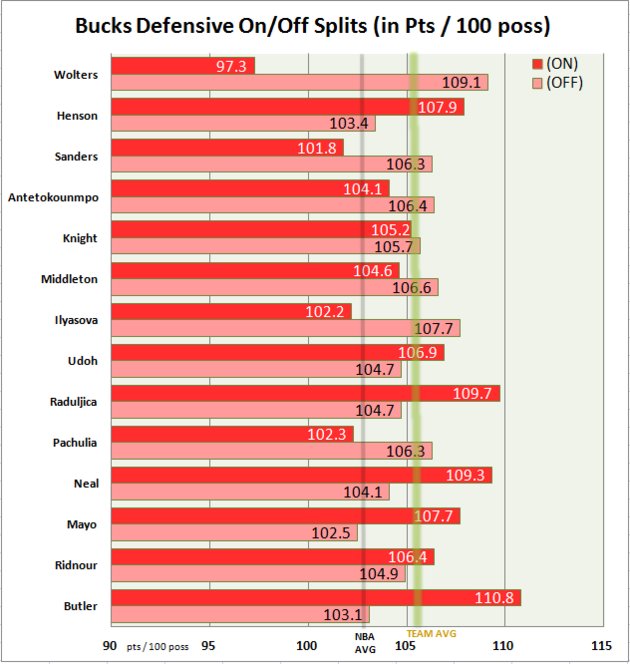 I've already alerted you to the observations made by Joe Kaiser of ESPN regarding the excellent early returns on Nate's defense, but it's worth reiterating how good Wolters has been on that side of the ball -- especially because Larry Drew can't seem to find minutes for the rookie and often struggles to even toss the kid a compliment in post-game interviews. We've got your back, Nate.

Wolters is busy trying to iron out some unexpected wrinkles in his offensive game (it'd be nice if he made more of his shot attempts, you know?), but his defensive profile is impeccable. The Bucks have performed like a top-five defensive unit during his 600 minutes on the floor (97.3 pts allowed / 100 poss), and a bottom-dweller during his time on the bench (109.1 pts allowed / 100 poss). That eye-popping split props up his team-best net rating +0.9 pts / 100 poss as well, but he's earned the boost.

Wolters has allowed a paltry 0.72 points per possession on 206 plays to opponents he's guarded this season, a mark that ranks 20th overall in the NBA according to MySynergySports.com. Counterparts have converted only 52 of 166 shots (31.3 percent), and Nate has done an excellent job challenging spot-up opportunities for opponents, as he ranks 5th overall in the league at 0.62 ppp allowed on 52 plays. This is a great trend for a guy who's being paid peanuts on his rookie deal and whose defense was seriously questioned leading up to last June's draft.

So why has Wolters been so good on defense? Well, it's not a garbage time miracle -- his defensive rating is consistently good across all game situations, and he's actually played more minutes this year during close contests because he was pressed into meaningful action at the outset of the season when Brandon Knight went down. I see three reasons for his success.

First, he has great size for the point guard position. At 6'5, Wolters is built well to challenge jump shots. When he can stick close to his man he consistently does a good job of closing out under control and staying in position to disrupt the vision and/or release of the shooter.

The second reason for success is that Wolters focuses his energy and effort on staying in good position to defend ballhandlers and spot-up shooters. He isn't atheltic enough to gamble for steals and accelerate to recover (the Brandon Jennings plan), but because he's mindful of that limitation he rarely gets too far out of position lunging for the ball early in a possession. In other words, he puts himself in a position to succeed as a team defender, which is at least half the battle.

Finally, Larry Drew did a nice job managing matchups for Wolters at the outset of the season, as he mixed in zone looks to help keep Nate out of particularly bad situations. The zone often appears to be an ineffective coverage for the Bucks, but I've seen some advanced Synergy numbers this season that actually say the half-court zone has been just as effective as the half-court man defense for Milwaukee. Maybe it's just easier to look ineffective in a zone? In any case, Wolters has been a part of that surprisingly good trend as well.

Hopefully Larry Drew works the rookie back into the lineup so we can get an extended look at the limits and values of Wolters on defense.

Why Are The Splits For Larry Sanders and John Henson So Different?

Here we go again! For all his faults and failings, Larry Sanders still appears to be every bit the impact defender that the Bucks signed to a long-term extension this summer. The Bucks have performed like a top-10 defense with Sanders on the floor and a bottom-five unit without him. Henson has looked a lot better as a rim protector this season, but somehow the Bucks have managed to play at a league-worst level with him on the floor. Sharing time with Neal, Mayo, and Butler no doubt pollutes Henson's split (although he's actually played the bulk of his minutes with guys like Middleton, Knight, Udoh, Antetokounmpo and Wolters), but I was expecting to see a better trend here.

Those are excellent numbers in any context. In fact, among players that defend at least six shots athe rim per game, Sanders rates as the best big in the NBA in opponent FG% and Henson clocks in at fifth overall. At this point I think Sanders has a greater impact on how offenses attack the paint (he has a greater deterrence factor and is a proven obstacle who forces players to take worse angles of attack), but Henson has definitely raised his play after an uneven rookie season on defense. John looks more confident in where to be and when to attack players who drive into the painted area. It should be no surprise that Henson and Sanders also rate out as the two best defenders on the team according to advanced metrics like ASPM and ezPM.

Sure Sanders is a zero (at best) on offense, and Henson still has that weird offensive split where the worst offense in the NBA is even more terrible when he's on the floor (93.5 pts / 100 poss ON vs. 97.4 pts / 100 OFF), but this duo needs to have more than 33 total minutes of action this year. Heck, the Bucks are actually +8.8 pts / 100 poss with the Sanders / Henson pairing on the floor, so it's not like the world will explode if they play together.

The long-term viability of the tube man combination is one of the most important issues the franchise can actually explore and experiment with for the remainder of the season. If the defensive numbers are any indication, it might actually be [gasp] fun to watch, too. Larry Drew needs to take immediate and definitive corrective action, even if he hurts Ersan's feelings in the process. The opportunity to see what Sanders and Henson can do together is too important to ignore.

Oh yeah, and he should get Nate Wolters in those lineups too.

*Statistical support for this article has been provided by NBA.com/stats