The Milwaukee Bucks are a bad offensive team, but how do Giannis Antetokounmpo and John Henson figure into that equation?

Everyone expected the Milwaukee Bucks offense to be terrible, right? I tried to set the expectations very low heading into the season: the Bucks lacked a go-to option to draw extra defenders, Brandon Knight's profile screamed off-ball option, and somehow Luke Ridnour graded out as a viable creator. Things were never supposed to be good. But even the modest hopes I pinned on transition offense and spot-up looks have been crumbled away due to injuries to Larry Sanders, Ersan Ilyasova, and Gary Neal, and possibly because of a lack of emphasis from Larry Drew in the his implementation of the system.

With so much ugliness to confront on this end of the floor, I decided to take a different approach and break down the offensive on-court and off-court splits for the roster. The value of rookie forward Giannis Antetokounmpo is easy to see, but a look at the numbers from up-and-comer John Henson at the team level leaves a few odd issues to discuss. Note that on/off stats are inherently noisy and shouldn't be considered a predictive tool, but the data does provide a look at how the team has performed in completed games. This tells some of the story of how the Bucks slipped to a 7-25 record. Have a look for yourself and see if the numbers make sense to you for each player on the Bucks. 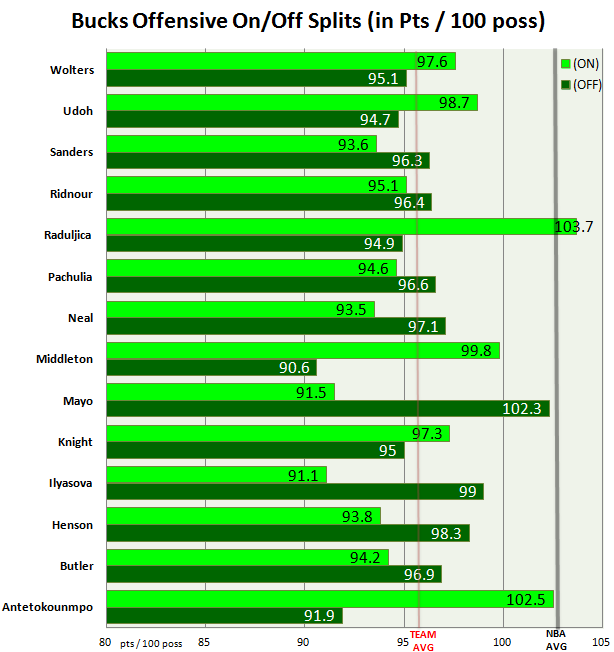 Here is how the minute load breaks down:

The only player on the roster with an on-court split that gets the unit above the NBA average is Miroslav Raduljica? A rookie big man at the end of the bench who has played nearly half of minutes (93/207) with the team down by 10+ points? Seriously?

The Bucks don't have a go-to option, and despite playing from behind most of the time they don't shoot enough threes to bridge that gap. It's a wicked combination of bad talent, poor execution, and sub-optimal scheming. Here's the team shot chart through the first 32 games, via NBA.com/stats: 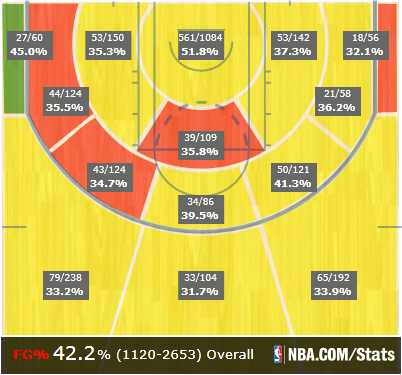 Giannis Antentokounmpo Is The Best

I mean that both literally and figuratively, of course. Giannis continues to make crisp cuts (1.45 ppp) in the half court and wildly effective plays in transition (1.19 ppp). His work has translated to 57.8% TS for his personal numbers and the largest positive (I'm looking at you, O.J. Mayo) on/off efficiency split on the team.

He's a rookie prone to mistakes, but the team actually protects the ball at a top-5 level when he's on the court and grades out as one of the sloppiest groups in the association when he's on the bench, per NBA.com/stats. They score 15% of total points on fast breaks when Antetokounmpo is in the game and only 11.3% when he is on the bench. Only 16% of points are generated from the dreaded mid-range zone with Giannis in the lineup (vs. an alarming 22.6% without him). The team FTA/FGA ratio also jumps from the equivalent of dead last (.202) to a top-10 level (.309). I could not be happier with what Giannis has managed to accomplish so quickly. His footprint is already visible.

If you want to get that sour taste out of your mouth from the Bucks' team shot chart, here's a look at the sweet production from Giannis so far this year: 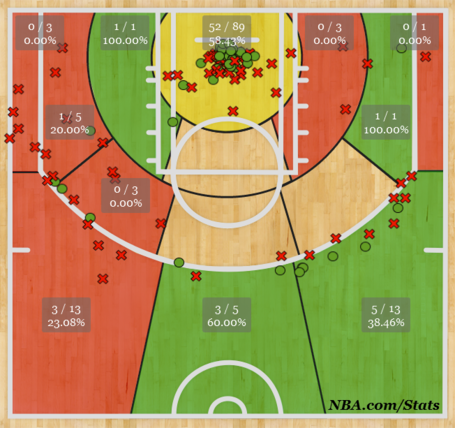 Why Is The Offense Worse When John Henson Is On The Floor?

John Henson confuses me. I think he confuses a lot people. First of all, his dominant hand is not actually his dominant hand. He looks smooth and skilled when operating as a southpaw, and anything he does with his right hand either doesn't work (he's a terrible at shooting jumpers and free throws) or looks mechanical and unnatural (his right-handed hook shots are downright ugly). Let's just call him a lefty and move on, okay?

The next issue is a bit more dicey. Larry Sanders and John Henson aren't a perfect pair, and for some people Sanders' elite defense might not look as attractive as Henson's presumed potential as a two-way player capable providing more value on offense. Larry has learned to avoid jumpers and limit his involvement to hand-offs, rolls, and crashing the offensive glass. Henson is trying to stretch his range and absorb more iso post looks. In fact, some of his penchant for hook shots may dig into his offensive rebound opportunities. So is Henson really a potential impact player on offense? I'm not sure.

The big problem for me is that post offense isn't a particularly efficient way for an offense to score. Henson has converted 25 of his 63 post opportunities (39.7%) this season and ranks 81st in the league at 0.72 points per possession, according to MySynergySports.com. That ppp mark is below the NBA average for post plays over the last two seasons (0.83 ppp), but the fundamental issue is that post play just isn't efficient -- at least on its own.

In theory, good post play will draw a second defender and open up valuable spot-up opportunities on the arc, ala prime Dwight Howard. The problem is that opponents aren't doubling Henson. They seem perfectly content with the eight-foot hook shots he hoists up, and John doesn't consistently have the vision or awareness to pass out of bad looks in time to get better chances for teammates. Why double a below-average post scorer when he will take a low-percentage shot that keeps him away from the offensive glass and limits his chances of getting fouled?

Instead, the Bucks just look kind of old school and dumb. They've set a baseline as one of the worst offenses in the NBA, but the unit has been markedly worse when Henson is on the floor. If he's a two-way buiding block for a future contender, don't think it's too much to ask to have him improve the worst offense in the league.

But maybe the on/off stats in the chart are misleading. Maybe ezPM is wrong. Maybe the on/off stats from last year were misleading too. Maybe RAPM was wrong. Maybe there's a perfectly good excuse for all of this and it is reflected in his career-high personal numbers. All I know is that I'm not yet comfortable with assuming Henson brings a lot of value to an offense. Maybe he should be a garbage man and energy player on offense like Larry Sanders.

For all of his craftiness in the post and boundless length, he hasn't shot better than 50% from the field since high school. Should we be able to say that about a big man with his size and skill? As I've previously pointed out, his jumper appears to be broken and isn't likely to get better. He shot 18-81 (22.2%) beyond eight feet last season, and even amid his best shooting season -- he's on track to crack 50% shooting from the field this year and has a nifty 54.7% TS mark that's far better than anything from the previous four years -- Henson is still just 19-66 (28.7%) from outside eight feet.

I'm very pleased that John Henson has raised his profile this season and he's having a very nice year on defense, but I still have plenty of questions regarding his big picture value to an offense. He provides a diversity and smoothness to the offense that's easy to see, but is a shoot-first post player with limited range really a difference maker in the modern NBA offense?

With the season already in the tank, these are the types of issues we should be pondering as the construction of a new core begins, right? Let me know what you think in the comments.

*Statistical support for this story has been provided by NBA.com/stats