Our Bucks podcast is back! In this episode we debate whether Nate Wolters, Khris Middleton and Brandon Knight belong in the so-called "core" of the roster.

The Milwaukee Bucks are a bad team, but does that mean the roster is filled with bad players? A dreadful 7-26 start is enough to call everything into question, so in our first podcast episode of 2014 we look for growth and attempt to start separating the wheat from the chaff.

Nate Wolters, Khris Middleton, and Brandon Knight are young players that have each had some very impressive moments this season. They play positions of need on Milwaukee's roster, and they each bring something valuable to table. But have they done enough to work their way into the "core" of the roster, or are they merely assets that should be given up in any deal that potentially makes the team better going forward? That's the question we pondered in our comeback podcast.

Is Khris Middleton the best piece from the Brandon Jennings - Brandon Knight trade? The former second-round pick from Texas A&M has suddenly discovered his three-point stroke, and as a result he's been one of the best Bucks players this season. Middleton shot just 92/387 (32.1%) from distance during his college career and plateaued at 31.1% on threes during his rookie season in the NBA, but in Milwaukee his shot has been pure. He's already hit 45/104 (43.3%) on triples this year, which has vaulted his TS to a very solid 55.6%.

Middleton has flashed a quick release and some decent versatility on the offensive end, and people are starting to take notice of his game. Zach Lowe of Grantland recently named him a 2014 Luke Walton All-Star, which I think qualifies as a compliment. Lowe strives to populate the team with "veteran cast-offs, anonymous young players, and guys with a precarious grip on NBA life who have managed a preposterous relevance this season," so take this for whatever you think it's worth. Here's the important stuff from Lowe :

Middleton can play both wing positions, and he has logged a tiny slice of time at power forward as the Bucks have scrambled with small lineups to make up for the injuries and bar fights that have decimated their front line. Middleton isn't quite a plus/minus god anymore, but the Bucks have been a competent NBA team with him on the floor.

He's shooting 44 percent from deep, including a saucy 48.6 percent on corner 3s - mostly the result of kick-out passes Middleton gets as Knight or some other player runs Milwaukee's main action. But Middleton isn't a one-trick catch-and-shoot guy. If he catches the ball and spies his defender scurrying to close out on him, Middleton will pump-fake, take one or two hard dribbles, and launch a nifty floater or pull-up jumper. He's not athletic enough to get closer to the rim, and he hasn't looked comfortable near the hoop. "The next step for him is finishing at the rim more efficiently," Hammond says.

If Middleton keeps hitting threes at this clip, he's quite a find for Hammond and the Bucks. But if this turns out to be a spike in shooting that means he's due for regression, maybe it's another story. How much better can he be than what we've already seen? And how likely is he to keep up what we've witnessed? I mean, does anyone remember how good Landry Fields was during his rookie year with the Knicks?

For now we do not include Middleton in the core and instead choose to think of him as a valuable trade chip that could help complete bigger deal.

Wolters was pressed into early action and he performed quite well. He protected the ball well and conducted the offense like a veteran, but Larry Drew recently banished the second-round sensation to the end of the bench. Wolters has the size to defend opposing guards, and the early returns on his defense have been outstanding.

The Bucks allow just 97.0 points per 100 possessions when Wolters is on the floor, compared to a whopping 108.8 pts /100 poss when he's on the bench. Overall, the Bucks are a net -13.7 pts / 100 poss without Nate and a +0.8 pts / 100 poss with him. And there's more! Joe Kaiser of ESPN recently noted the excellent early returns on Nate's individual defense. If you don't have ESPN insider, just know that Kaiser cites stats from MySynergySports.com which place Wolters among the top-10 qualifying defenders (minimum 100 plays) at 0.693 ppp allowed and tops overall at defending jump shooters (0.489 ppp on 47 plays).

The only downside to Nate, confusingly, has been his shooting. He established himself as a scorer in college, so it's a bit odd to see a 3/27 (11.1%) line from three-point range and a 44.9% TS mark. Why is it that second-round shooters like Jodie Meeks, Doron Lamb, and now Nate Wolters go cold the moment they put on a Bucks uniform? Here's Wolter's sad shot chart, via NBA.com/stats: 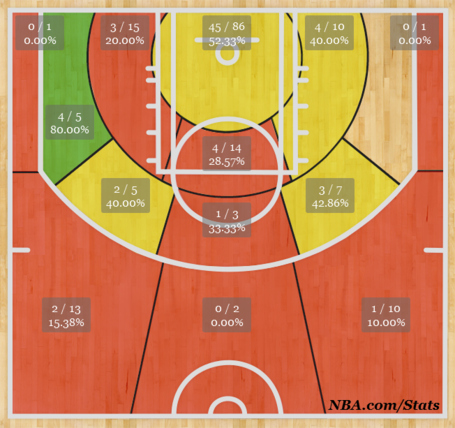 Our answer at the moment is that Nate is not part of the core. He's a useful backup and a pleasant surprise, but if Greivis Vasquez can be an assist leader and get passed around the NBA as a placeholder option, then how can Wolters be considered a core player?

Brandon Knight is interesting in theory and underwhelming in practice. He has the tools of a point guard you might create in a video game: good size and strength, impressive open floor speed and acceleration, bookish intelligence, and a solid three-point stroke. Unfortunately, he also often looks like he's under the control of artificial intelligence. Something is just a bit off with how he runs an offense, and the best games tend to come when you least expect it; they also tend to happen in a way you can least understand it or believe it.

He does not seem to have the inherent feel for dribble pacing and floor spacing, so his upside as a half-court creator seems limited. His 51.2% TS is precisely in line with his first two seasons in Detroit, but his PER has finally jumped to an above-average level (16.1). Does that mean he's part of the core and a PG for the future? Let's put it this way: Frank is lukewarm on Knight, which probably qualifies him as an optimist, and he concluded: "the Bucks should be very open to upgrading the point guard position; I think they have to be."