Bucks exercise options on Henson and Antetokounmpo, request waivers on Wright and Millsap

Share All sharing options for: Bucks exercise options on Henson and Antetokounmpo, request waivers on Wright and Millsap

Bucks General Manager John Hammond announced today that the team had exercised both the third-year contract option on Giannis Antetokounmpo's contract and the fourth-year option on John Henson's contract. The move is an obvious one, as it fully guarantees the players' contract for that season. Here's a quick snapshot of the salaries. 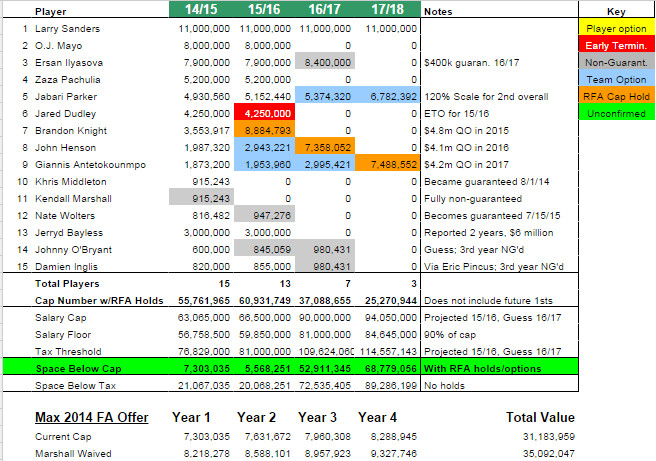 From the team release:

Henson, 23, played in 70 games last season and ranked among the league leaders in blocks per game (1.7, 9th) and field goal percentage (.538, 13th). He also averaged 11.1 points and 7.1 rebounds in 26.5 minutes per game. Henson posted streaks of 21 and 15 consecutive games with at least one blocked shot, joining Serge Ibaka (OKC) and DeAndre Jordan (LAC) as the only players in the league with multiple streaks of 15-plus such games during the season. In his two NBA seasons, Henson has played in 133 games (32 starts), averaging 8.7 points, 6.0 rebounds and 1.2 blocks in 20.2 minutes per game. Through four preseason games, Henson is averaging 11.0 points, 6.0 rebounds, 1.3 assists and 1.5 blocks per game.

In addition to extending the stay of two of the their promising youngsters, the Bucks also requested waivers on Chris Wright and Elijah Millsap. Wright left the team two weeks ago after reportedly receiving an offer to play in Europe, though there's been no news of him officially signing anywhere since then. Millsap had seen very limited time after being brought in as a camp body last month.

The move cuts the Bucks training camp roster down to 16, one more than the league's regular season roster max. Training camp invite Micheal Eric will be that final cut, and barring any surprising moves in the coming weeks, the roster appears to be set.