We're tracking the evolution of the 2014 NBA Draft prospect top-100 rankings at DraftExpress and ESPN, and this exercise has produced some interesting results.

Fluctuations in the stock of various NBA Draft prospects in the ranking systems (i.e., thoughtful projections by experts on who will be the best players in a draft class) has always interested me more than speculative mock draft scenarios (i.e., scheduled guesses at potential draft situations systematically undermined by fluid standings, shifting hierarchies, and hunches regarding GM preferences). This year is particularly fascinating, as multiple players may be capable of changes the long-term trajectory of an NBA franchise.

At this point in the season I like to think of the 2013-14 Milwaukee Bucks as a stubborn piñata; a hollow husk of a squad destined to take repeated beatings and an object that ultimately stands in the way of our true reward: the sweet, sweet candy that is the 2014 NBA Draft class. I've been tracking the Big Board and Top-100 changes at DraftExpress and ESPN since October, and a lot of interesting trends have developed. Fortunately for Bucks fans, the team has been so consistently bad that there isn't much to worry about when it comes to the team's chances at landing a top talent.

Most of the recent changes in the rankings fall outside the scope of Bucks' concerns. Remember when I fawned over Joel Embiid back in December, when he ranked 4th on the DX list and 3rd on the ESPN Big Board? Since then he has cemented himself as the top prospect with both outlets, and he even had the good sense to toss on a Bucks t-shirt. Embiid has battled through fatigue and some (seemingly) minor knee and back issues that punctuated a mid-season slump of sorts, but he's established himself as a talent too rare and too enticing to fall much from his perch as the top prospect.

Sadly, that's probably the biggest news regarding the list of projected top-5 players, which has crystallized over the last month. The order at the top for DX has remained constant for six straight iterations. It proceeds in this order: Joel Embiid, Andrew Wiggins, Jabari Parker, Julius Randle, Dante Exum, Marcus Smart. The only change at ESPN is that Randle and Exum are flipped.

You can debate the pros and cons of these prospect, and in fact we have already engaged in these debates (Part 1 | Part 2), but as it stands any of them would provide an important upgrade to the talent base in Milwaukee. If your opinion on any of these top prospects has drastically changed in recent weeks, just know that the experts at DX and ESPN have held firm on the following hierarchy since January: 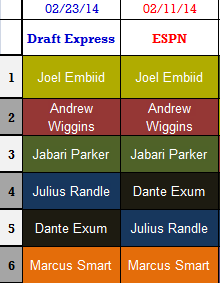 With that said, it's time to evaluate the evolution of the DX and ESPN rankings (included at the bottom of this article) and expand our draft horizons.

Remember when I told you to keep an eye on the stock of projected first-round picks that pulled out of last year's supposedly weak draft to gauge the depth of this supposedly strong class? Well, now I just feel bad for that group of guys -- which includes Gary Harris, Mitch McGary, Willie Cauley-Stein, Mitch McGary, Alex Poythress, James McAdoo, and Isaiah Austin -- because it looks like more than a few of them made a mistake by returning for another year. Harris (DX #11, ESPN #10) has managed retain his value, but he's one of the few happy stories. Hell, Marcus Smart probably even wishes he did things differently at this point.

McGary, a preseason all-american selection, has disappeared from Chad Ford's top-35 and fallen to No. 37 at DraftExpress in the wake of his back injury. Cauley-Stein has slipped from ninth to 15th at DX and from 11th to 19th at ESPN. Austin, Poythress and McAdoo no longer crack the top-35 at either site. Woof. Is this a sign that the talent in the middle of the draft has improved considerably over last year, or is it a warning about the difficulties of trying to project college freshman to the NBA level and the fragile (or perhaps fickle?) nature of "potential?" It's hard to say for sure, but that isn't much of a comforting thought to offer the young men listed above.

In other news, Zach LaVine briefly jumped to No. 26 on the DX board, but he has since dropped back to the 40 range, and at ESPN he has shifted from No. 10 to No. 17 since December. Many of his best traits will bolster his draft stock (he's a springy athlete with size to play SG and a solid efficiency profile), but he may need another year to develop before he touches the high end of the draft.

If you're still looking for a wing prospect for the Bucks to target in the mid-to-late first round (or maybe even the second round), I urge you to consider junior swingman K.J. McDaniels from Clemson. At 6'6 with excellent athleticism, McDaniels measures out as a prototypical NBA swingman. He has always flashed highlight play ability and solid transition skills, but his recent overall improvements on offense -- where his numbers have swelled to 17.0 PPG on 57.2% TS as a junior -- suggest that he may have an outside shot at becoming an effective two-way role player. McDaniels has jumped from outside the top-30 at DX to No. 22 over the past month, and although he isn't in Ford's top-35 yet, I expect to see him there soon. If not, I'd love for the Bucks to take a flyer on him if he lasts to the second round, but something tells me he won't be around when those later picks are on the clock.

Tyler Ennis didn't look like much of a prospect at the beginning of the season; or at least not much of a freshman prospect. The Canadian native came into the year ranked no better than the 20th-best prospect in his class by the major recruiting services, but since then the Syracuse point guard has swiftly re-shaped perceptions with clutch triumphs and excellent orchestration of the offense for the nation's highest-ranked team. Take a look at how quickly Ennis has shot up the Draft Express and ESPN rankings:

This trend highlights two interesting discussion points regarding the young point guard. At an estimated 6'2 with a 6'5 wingspan, Ennis lacks the elite size that NBA teams covet at the point guard position. His measurements put him roughly on par with guys like Jimmer Fredette and Norris Cole, according to the DX measurement database.

He's also not a top-flight scoring talent (or at least a "pure scorer"), and he's not blessed with the elite quickness that has allowed smaller guards to thrive at the next level. Jonathan Givony, the head man at DX, cited the following weaknesses in Ennis' game prior to the season:

Sure enough, Ennis has struggled to score at the rim in his early exposure, converting just 52 percent of his looks at the basket and dragging his true shooting down to 52.6 percent - a mark below the 54.2 percent D-I average, according to hoop-math.com. Any defensive concerns have been sufficiently masked by the forgiving zone scheme employed at Syracuse. Given the lack of eye-popping measurables, it's understandable why Ennis was pegged as a late-second round talent coming into his freshman season.

The intriguing aspect of his game is that he has demonstrated the ability to see the floor and read multiple defenders while attacking in pick-and roll situations, which has in turn catapulted him into the top-10 range on both the DX and ESPN big board. His anticipation and ability to manipulate the structure of the defense has allowed him to make big plays in big moments and simultaneously protect the ball extremely well.

As the counterpoint to his underwhelming scoring numbers (11.8 PPG on 52.6% TS), Ennis leads the ACC in assists and has posted an impressive 3.6:1 assist-to-turnover ratio. He's been creating his own offensive opportunities and developing good chances for teammates throughout the year. It seems that Ennis understands how to put defenders on a string with the power of subtle movements and changes of pace. The strengths Givony listed in the preseason scouting report for Ennis have all been on display:

These so-called "pure point guard skills" have proven to be difficult to teach and even more difficult to learn at the next level. Look no further than Brandon Knight for the other the debate. Knight has the measurables, but at times if feels like the Bucks reduce his decision tree as a playmaker and transform a game of chess into a checkers match. After all, that's how Knight can soak up a ton of possessions, put up nice raw numbers, and the Bucks can still slump to the 29th-ranked offense (despite surrounding Knight with proven shooters). We all wonder if Knight will truly ever "get it" as a high-stakes, half-court point guard. It seems as if Ennis already does "get it" (at least at the collegiate level). If you think Ennis is just a player that appeals more to the messy traditional eye test method and more romantic notions about point guard play, you should know that the WARP projection system created by advanced stats guru Kevin Pelton of ESPN actually has Ennis rated higher than even Embiid for college freshman (as of late January) thanks to a high steal rate and translated assist rate, so he's gaining recognition in many circles.

Moreover, Ennis has thrived against top defenses and dominated high-leverage situations. ESPN recently posted the clutch stats for the young guard (through Feb. 14), and they're excellent:

Ennis didn't even commit his first turnover in the final five minutes of a contest until he finally coughed the ball up with 3:14 remaining in a win against Pittsburgh on Feb. 12 (which featured his miracle game-winning shot). When a freshman point guard for the No. 1 team in the nation doesn't turn the ball over at the end of games for 23 straight matchups, it's worth taking note.

The fine line between manufactured clutch success and dumb luck can be tricky to navigate at times, but the numbers go deeper than just a few big shots. I recently stumbled on an excellent draft site called DeanOnDraft.com, and in this article the author explores the depth of success Ennis has enjoyed in the half court. The short version is that Ennis has been better in the half court than in transition, and significantly better against the best defenses Syracuse has faced. I also endorse the author's general assertion that "a half-court skill set equates to a clutch skill set, since high leverage situations are normally against a set defense when transition opportunities wane," but that brings us back to the Brandon Knight discussion (which can wait for another day).

With Ennis it may come down to how a GM balances measurables vs. refined basketball skills. It's hard to know how good he can be at the next level, and point guard is the deepest position with the highest replacement level in the NBA, but it's easy to see that Ennis merits consideration from any team drafting in the back half of the lottery. Considering where Ennis started the season in the eyes of scouts, that's a pretty big deal. 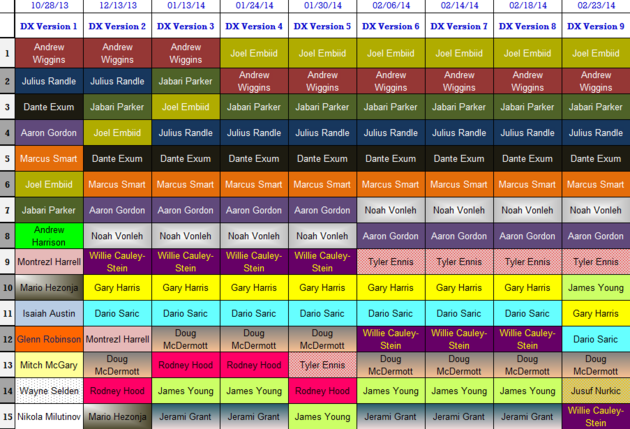 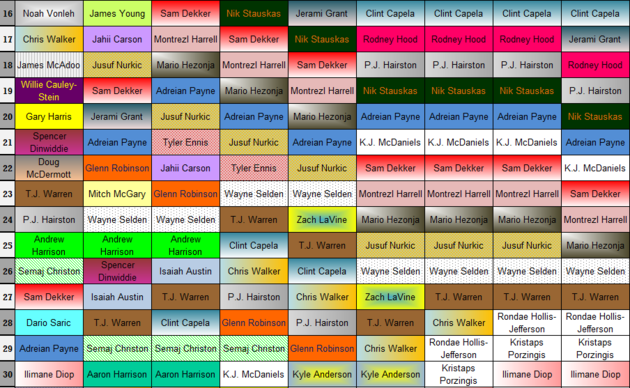 Evolution of Chad Ford's NBA Draft Big Board at ESPN 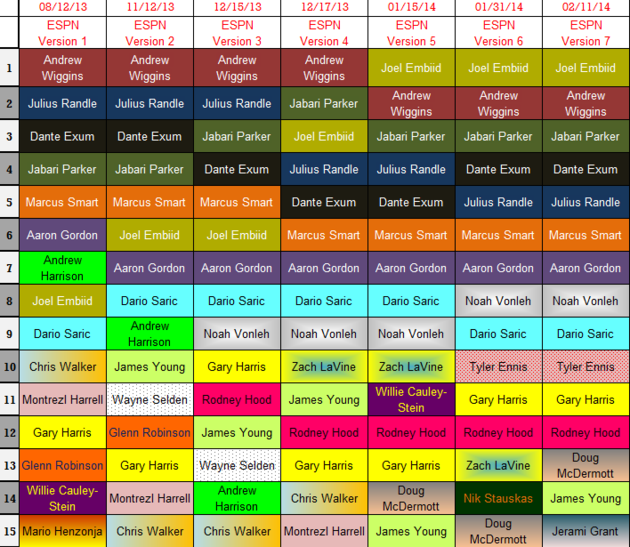 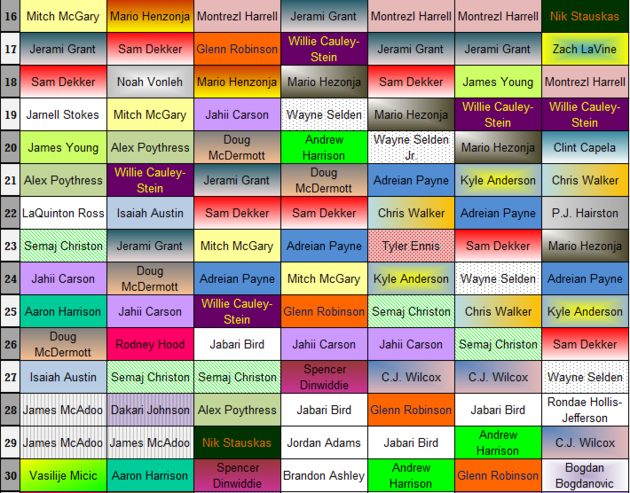