In the constant pursuit of success, smart NBA teams and GMs target top talent and respond to the incentives created by the current system that governs the league. For some reason, this strategy upsets people when it involves piling up losses. With depressed rookie contracts and built-in mechanisms (early extensions, bird rights, restricted free agency offer sheets, etc.) to encourage young talent to stay with the team that drafted them on a second contract and beyond, small market teams without a franchise-caliber player have every reason to prioritize the acquisition high draft picks over low-benefit playoff pushes and mid-tier veterans on bloated free agent deals. The NBA world has always revolved around transcendent talent, and small markets often have to be a bit more creative in the acquisition process.

Welcome to the world of tanking. With little to play for this year, the Bucks recently shut down Larry Sanders for the rest of the season. It's a wise move that aligns nicely with the team's short-term and long-term goals. The Sixers can't seem to hold a fourth-quarter lead, let alone win a game, but they're auditioning young role players for future roster spots and maintaining maximum flexiblity heading into a top-heavy draft. GMs are responding to incentives to improve their chances to land a special talent in the draft. Derek Bodner of SB Nation's Sixers blog, Libery Ballers, laid out what's at stake nicely in his excellent piece on "fixing" "tanking" from earlier this month:

The process of luring established superstars to change teams now becomes much more about the destination than it is about fiscally sound management putting themselves in a position to capitalize. Whether that destination is created based on location or the presence of existing superstars, bad teams without a superstar already in place have a tough sales pitch to give to the transcendent stars of the time.

The NBA has spent the last 20 years limiting the inherent risks of the draft, both by restricting how much of a salary the incoming rookies can negotiate and by preventing GM's from drafting kids with no post-high school experience and with lots of noise in their scouting report. They then limit the ability for struggling teams to use free agency as a legitimate means to attract franchise building blocks. And, oh by the way, throw in a restricted free agency that virtually guarantees that a superstar coming off of his rookie contract will re-sign with the team that drafted him during for his second contract, giving the original team very high odds of retaining a superstar during the first 9 years of his career, and most of their physical prime.

And the NBA wonders why teams without franchise players are lining up to draft near the top of the draft?

The Bucks and 76ers are converging on a battle for the top NBA Draft Lottery odds, and it's important to remember that the stakes are high (even if the payoff is ultimately uncertain). 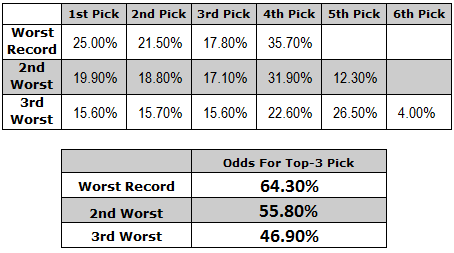 Now for some Feats of Strength Tankgth:

My overall belief is that tanking is a symptom of a problem rather than the problem itself, caused by a combination of the very nature of the NBA and the impact one superstar player can have on a team, the team's desire to be able to retain their drafted played, and management's desires to limit the severity of their mistakes. I also believe it is currently being blown out of proportion, with many of the worst teams in the league getting there through their own merits and organizational incompetence rather than intentions. Is it somehow more frustrating to watch the Sixers intentionally not field a competitive team than it is watching the Bucks accidentally do so? Should the Bucks be rewarded for incompetence and the Sixers punished for a plan?

The draft is necessary for teams that are not currently destinations to get franchise altering talent. There are plenty of examples of franchise level players changing teams in recent years, but most of these players ultimately went to teams that already had superstars in place. From LeBron and Chris Bosh joining Dwyane Wade, to Chris Paul joining Blake Griffin (after nearly joining Kobe), to Kevin Garnett agreeing to go to Boston only after the Celtics acquired Ray Allen, superstars have been going to franchises that already have superstars in place. The draft has been the best place to get that initial superstar, that superstar that makes you destination, that makes you interesting to other superstars looking to find greener grass.

Some people see tanking as a moral problem; an untenable and unacceptable strategy that taints competition in the league. In my opinion, there are few things in the NBA that will ever truly inspire competition quite like premium talent entering the league at a young age. Proposed solutions to this supposed problem threaten to overhaul the entire structure of the association.
I find it odd that anyone would be willing to rip apart the league at the seams in search of some bedbugs that might not be there and/or might not bite, but it appears that something may eventually be done to address the issue. Zach Lowe of Grantland recently wrote yet another column about the draft "wheel" system proposed by Celtics' assistant general manager Mike Zarren. What scares me is that the concerns of small markets are hard to address, and taking away the best route to a franchise player for small market teams could put the Bucks in a tougher spot than they've put themselves in recent decades.
More importantly, everyone needs to acknowledge that NBA franchises are not created equal. The ethics of tanking are complicated, and fundamental inequality in the NBA is real. Michael Baumann of Liberty Ballers channels political philosopher John Rawls and reminds critics of tanking to take a moment, step back, view the NBA world from its original position, assume the veil of ignorance, and think about the type of world they'd want their favorite franchise to live in:

The NBA is just like the world at large in that its 30 teams have been placed at different points on a scale of utility. The Lakers have history, wealthy ownership, a massive media market and a city that's enticing to free agents. Teams like the Bobcats and Sixers have less enticing surroundings and the disadvantage of not even being the most popular basketball team in their respective media markets. Even the NFL, whose hard salary cap, greater interchangeability of talent and overwhelming financial might can shoehorn even the New York Giants and the Jacksonville Jaguars into a rough state of pareto optimality, suffers these issues. If the NFL isn't crudely egalitarian, how can we expect the NBA to be?

That necessitates controls--Zach Lowe called it "charity," but I prefer to call it a welfare state or democratic socialism. Charity assumes social stratification and a calcified order of inequality, while the welfare state or democratic socialism is Rawls' difference principle put to work. The best sports leagues aren't crudely egalitarian--otherwise they'd be almost completely random--but neither should the deck be stacked so heavily in favor of the naturally advantaged that access to the ultimate goal (championships, not regular-season wins for their own sake) is practically restricted to the few.

But sometimes the mechanisms that support our society are ugly, and when they are, you'll see waves of critics, who are either unaware of the benefit they themselves derived from such mechanisms (Stan Van Gundy), or in the camp of those who would benefit from the inequality an unrestricted system would create (Bill Simmons, more in his role as a Celtics fan than as a national columnist) decrying that ugliness and insinuating that the root cause of that ugliness is not the systemic disease of inequality, but the remedy that reduces its effect. It's like vaccine denialism--even if vaccines did cause autism in a small number of cases, which they don't, they still prevent smallpox, pertussis and measles in large numbers. And because we're unable to see the larger picture, or look at the world from the original position, we forget this.

Hold your head high and keep that message in mind as you watch the Bucks chase the best lottery odds over the remainder of the season. Sometimes good medicine tastes bad, right? 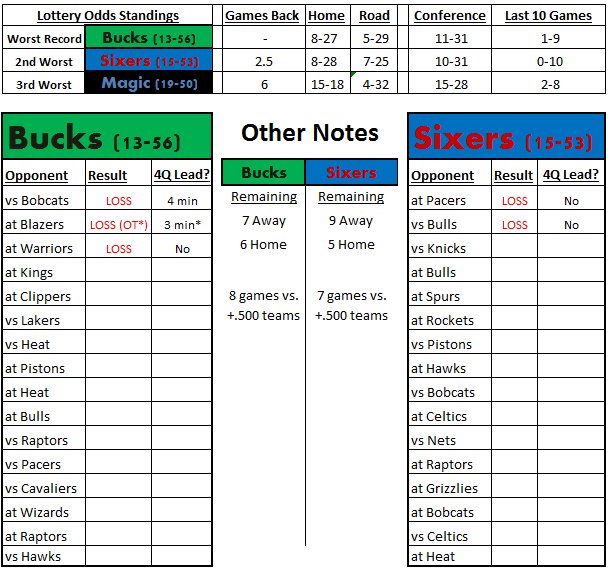