The lineup stats for the 2013-14 Milwaukee Bucks aren't great. That shouldn't come as a big surprise, but the specifics are pretty sad.

This Bucks season has been a bloodbath, but it's hard to say who's to blame. John Hammond spent a not insignificant sum of money this summer on players who have (to put it mildly) underperformed. Injuries to Larry Sanders, Zaza Pachulia, O.J. Mayo, etc. have stripped the team of its depth at various points in the season. Larry Drew has struggled to keep the team competitive on a night-to-night basis. Maybe everyone deserves a measure of blame?

This particular team doesn't really deserve or demand much analysis. The roster will hopefully look quite a bit different next season, and at the very least a top prospect from the 2014 NBA Draft will be added to the squad. I recently looked at some lineup stats, and I figured I might as well pass along the information on how Larry Drew's top combinations have performed this year. It's messy, but what exactly would you expect?

It would be nice to see the young players make a larger positive impact, but the lack of premium talent on the roster isn't exactly a surprise at this point in the year. Teams with 12 wins in 59 games aren't supposed to be loaded with all-star players. Knight, Middleton, and Henson/Sanders have shown hope of becoming quality contributors on better teams, and that's probably all you can ask for in a season like this one.

Every normal rotation player on the roster owns a negative net efficiency rating for the season. Only Jeff Adrien (+9.9 pts / 100 poss) and Ramon Sessions (+4.9) are above water, and neither of them particularly factor into the long-term plans of the franchise. Nate Wolters (-0.6) is the only other player close to the break even point. Giannis Antetokounmpo (-4.9) and Khris Middleton (-5.4) have posted respectable numbers in comparison to other key players like Brandon Knight (-8.9), Larry Sanders (-9.3), and John Henson (-12.2).

The full season numbers are shown below, based on the on-court offense and defensive efficiency stats. 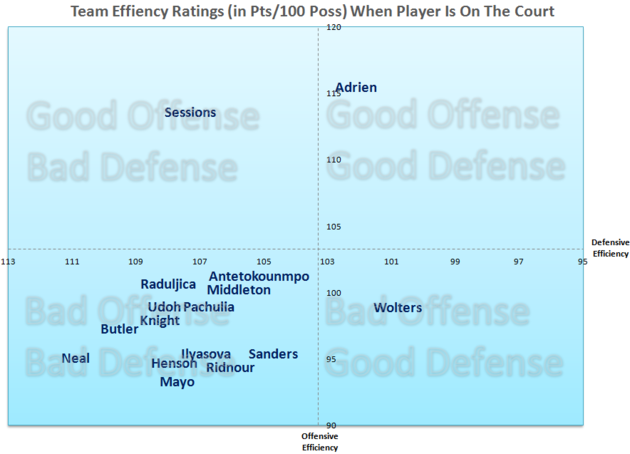 When it comes to two-man lineup combinations, a whopping 27 of the 30 most-used pairings own a negative net efficiency rating. The only three combos gaining ground on opponents are Middleton + Wolters (+6.3), Henson + Wolters (+3.1), and Antetokounmpo + Wolters (+2.7). If you notice the common thread in those lineups is Nate, it shouldn't surprise you to learn that all three of those lineups have performed well on defense.

The most detrimental pairings in the top 30 (in terms of minutes played) this season have been O.J. Mayo + Henson (-20.4), Butler + Mayo (-24.4), and Henson + Ilyasova (-18.0). It's frustrating to see Henson lodged in under performing offensive lineups with O.J. and Ersan, as John's personal efficiency numbers have never been better, but the weird trend of the Bucks playing worse on offense when John is in the game continues to persist. When Henson is on the floor the Bucks have scored 95 pts / 100 poss in 1286 minutes. When he is on the bench the Bucks have scored 100.8 pts / 100 poss in 1581 minutes. It's a dumbfounding trend, and I wish I could make better sense of it without discounting Henson's high-end offensive potential. 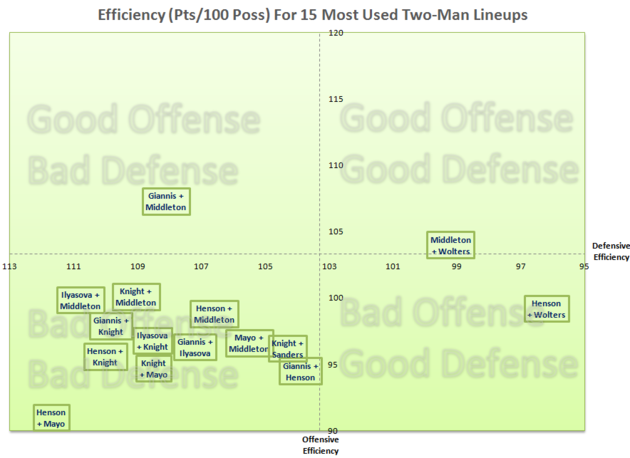 Down the stretch of the season, it would make sense for the Bucks to experiment with combinations that include Wolters and Middleton a bit more as a way to wedge in the other important young pieces like Henson, Antetokounmpo, and Knight. Perhaps the team can finally settle in and develop some useful combinations that make sense to carry into next season. That's about as close to an upbeat conclusion as I can get. 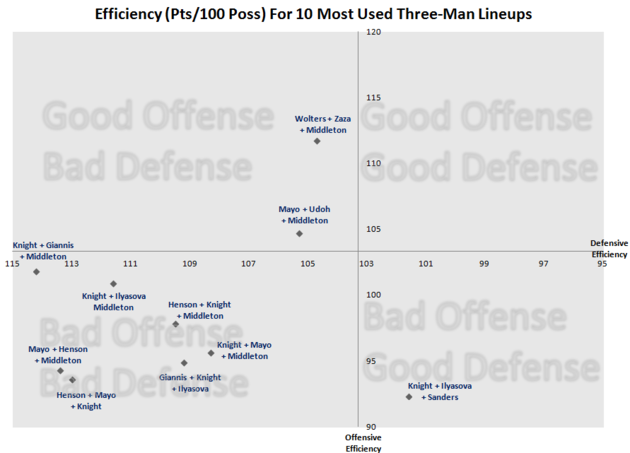 *Statistical support for this story provided by NBA.com/stats