The Bucks haven't been quite as awful lately. Does that mean anything?

Although they maintain their position at the bottom of the standings, the Milwaukee Bucks haven't looked like the worst team in the NBA in recent days. Should we make anything of that?

Share All sharing options for: The Bucks haven't been quite as awful lately. Does that mean anything?

The Bucks, owners of the worst record in the NBA since early in the season, wrecked the Utah Jazz, a team that entered the game with 10 more victories than Milwaukee, at home last night. And when I say wrecked, I mean obliterated. Like, they made the Jazz look like...well, the Bucks on most nights.

Was it surprising? The degree to which Milwaukee dominated the game was, but perhaps more surprising was that the Bucks were actually favored by one point. I haven't paid any attention to point spreads all season, but apart from the recent game against the 76ers, I doubt the Bucks had been favored in any game for quite some time.

It's just one home game, easily overlooked because Utah's few recent wins have mostly come against other Eastern Conference dregs. Not to mention the Jazz were on a back-to-back, having faced the physically exhausting Indiana Pacers a night earlier.

Since the trade deadline, Milwaukee's play has hovered closer to "pretty bad" than "god awful."

But the Bucks' success against the Jazz might be a bit more than a fluky beatdown of a tired team. Truthfully, the Bucks probably passed the title of "NBA's Worst" to Philadelphia when the 76ers sold off half their remaining team at the trade deadline. At the same time, Milwaukee's play has hovered closer to "pretty bad" than "god awful." As you can see in the following graph, while the Bucks' overall winning percentage hasn't improved much, their Expected Winning Percentage, or Pythagorean Expectation (a measure based on point margin), has been on a nearly uninterrupted climb since an 86-114 loss to the Clippers in late January. 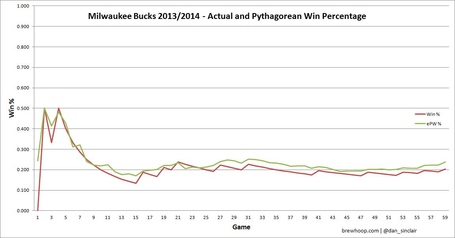 In that span the Bucks have added 2.1 percentage points to their true winning percentage and 4.6 points to their Pythagorean Expectation. In fact, the Bucks' average margin of defeat in that stretch is just over 3 points, much better than their 8.14 margin overall. That point margin translates to an estimated 39.5 winning percentage, which is about where the four-games-out-of-the-playoffs Cleveland Cavaliers sit right now. DANGEROUS WORDS, THOSE ARE.

It's a weird thing to make sense of, since we're equating "not losing by a ton every night" with progress. Seems sacrilegious, in a way. But the math is what it is, and it backs up the idea that the Bucks have been playing a bit better lately. Another mathematical marker: In ESPN's Hollinger Power Rankings, the 29th-ranked Bucks are closer in rating to the 16th-ranked Brooklyn Nets than the 30th-ranked 76ers.

What's different? I put together two more graphs as I investigated. Each plots Milwaukee's game-to-game offensive or defensive ratings, as well as a 5-game rolling average to chart hot or cold streaks. 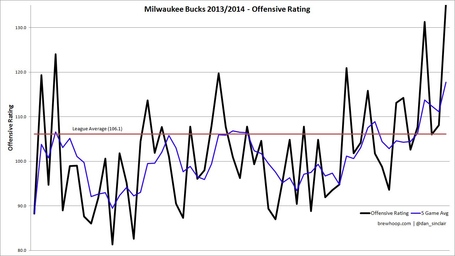 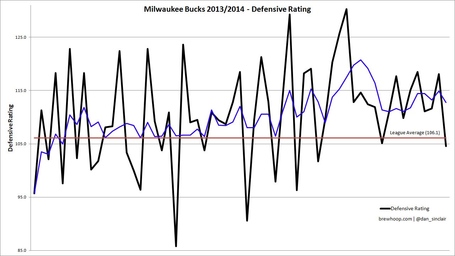 Keep in mind that lower is better on the defensive rating graph.

It would seem Bucks games have morphed into defense-optional playground shootarounds over the past few weeks. If we're really charitable with endpoint selection we can point to Milwaukee's 110.2 offensive rating in their last 10 games, which would tie Houston for 5th in the NBA for the season. Granted, that figure is heavily swayed by the 130+ ratings Milwaukee put up against Philly and Utah, two bottom-5 defensive squads.

It's hard to point to a root cause. Ramon Sessions has been an offensive savant in his 5-game sample, with a 66.5 TS% and a hard-to-rationalize 86.1 free-throw rate. Khris Middleton is bombing 3s again (over 50% shooting during the stretch I mentioned earlier). Brandon Knight and Nate Wolters have stabilized the starting guard unit, and even Ersan Ilyasova has started to round back into form (as evidenced against the Jazz). It looks like a conglomeration of hot streaks, coupled with an easy schedule, the sort of happy coincidence that propels a handful of teams into hot streaks every season.

The real question is, of course, what does it all mean? In the purest mathematical sense, since that seems to be the theme here, it could be little more than regression to the mean, the mean in this case being a tick above soul-crushing despair. You get a favorable stretch of games (a home-heavy stretch, what's more), a few more shots fall than usual, suddenly things don't look so bad. Or, perhaps what we're seeing now is the long-awaited realization of what we expected the Bucks to be this season. They're still not very good, but they're also not the worst team in the world. Had Larry Sanders not taken an elbow to the face, they might look even better, at least enough to remove any doubt as to whether the Sixers will eventually overtake them for highest lottery odds.

Alas, the timing could hardly be worse. There's still too much uncertainty (and frankly, too few good results) to conclude that much of anything the Bucks are doing right now is clearly working. Is it better than before? Yes, but that's owed more to just how bad it was before than how so-so it is now. Instead, all this recent "success" does is potentially damage Milwaukee's draft standings. Thankfully (?) most of the damage has already been done: while the Sixers may overtake them, the Bucks are still 5.5 games ahead of Orlando in the lottery standings. Unless things take a drastic turn, Milwaukee still looks like a lock for a top-5 pick. For what it's worth, Basketball-Reference.com's playoff probabilities report still predicts the Bucks to finish with the league's worst record.

Late last season, I ran this same analysis on the playoff-bound Bucks and found that squad was actually outperforming its expected record. Most would consider last season a complete waste that did far more harm than good--it was also, in numerical terms, one of relatively good luck. The Bucks have been anything but lucky this season, but it seems likely to do far more good than harm.