As the Bucks move toward a new, young identity in the next few years in an effort to get an arena built and keep Seattle at bay, there will be plenty of talk about rebranding the franchise with new logos, team colors, and uniforms. If our new majority team owners do indeed decide to authorize a visual transformation, I can only hope that they are tactful in their decisions. Let’s stay true to our past while moving toward a bright future.

Yes, I’m crazy to be posting about the Bucks’ uniforms and suggesting changes. Few things seem to raise hackles quite like uni-talk, and the last thing our fanbase needs right now is more in-fighting. With that said, I’d like to express my opinions and hear some more unique perspectives on the subject. It’s fine if we disagree, but let’s at least agree to disagree and always stand together as one united Bucks fanbase.

I’ll start by saying that I am a fervent supporter of green and red as the Bucks’ primary colors. The most tired argument leveled against this uniform by both Bucks’ fans and casual observers is that the set is "too Christmasy." Here’s the thing: red and green are two of the most commonly used colors on the planet. By suggesting that Christmas holds a monopoly on the combination of the two is ridiculous, and by doing so you are admitting defeat to the holiday. By that logic, the Italian flag is too Christmasy. Are strawberries are too Christmasy because the leaves are green and the fruits are red?

If anything, the X-Mas factor has been an advantage for the Bucks. Perhaps it has caused other teams to shy away from the color combination, and has left the Bucks with a unique identity. Would Bucks’ fans prefer blue and red as primary colors? Then we can be just like the Pistons, Clippers, Sixers, Hawks, and Wizards; not to mention the superfluity of teams in other major sports with that combo. I think we should own green and red, and wear it with pride.

When I first became a Bucks fan, the team was in the red-abandonment period of the late-eighties/early-nineties, a time when guys like Terry Cummings, Jack Sikma, and Todd Day rocked forest-and-lime green uniforms with what looked like hardware store paint samples of gradient green on the jersey sides—affectionately known as the "Irish Rainbow." If red is abandoned, I see this green and white look as one of the few available options, with a green-and-brown/tan Wisconsin forest-inspired look as a close second. The options are limited, and it’s my view that we should collectively embrace green-and-red as a connection to our past and as a reminder that our identity has existed longer than most NBA teams—and that we intend to continue existing.

I was utterly dismayed when the team made the switch to green and purple in 1993, due in no small part to my loathing of a certain football team to the immediate west. When the team made the switch to purple, they also made the ill-advised decision to create a beveled wordmark with a supersized B & S. If you take out the ‘uck,’ you’re left with big pile of BS. The current logo could certainly use a touch-up as well. It looks good from a distance or when displayed as a thumbnail, but when blown up it looks like an oddly-symmetrical and disturbed deer. To my eyes, an updated version of the Buck head logo that was stitched onto the shorts from 1968-1976 would be an improvement as a primary logo. For a wordmark, just keep it simple and return to block lettering; at least for the base home and road jerseys.

I vividly remember reading an Eastbay catalog in the mid-nineties, and seeing a retro Oscar Robertson jersey for sale. The dark green with red and white piping looked fantastic to my eyes, and I remember wishing that the look would be resurrected. To some extent, this wish was fulfilled in 2006 when the team switched back to the Xmas look during the retro-fetishist movement of the last decade. Sure, we kept the crappy wordmark and added dumb-looking side stripes, but it was still a vast improvement over the purple.

So what are my suggestions for a new Bucks’ identity? Beyond an updated wordmark and logo, I think that the Bucks should keep red and green, but add a new tertiary color: gold. Nothing too flashy—just a subtle addition of gold or yellow to be used in number outlines and piping. I think that this would cause the jersey to visually ‘pop,’ and the color combination is pleasing to the eye. Take a look at the Lithuanian flag, and tell me that the three colors don’t look nice together. A few times per year, the team could wear alternate uniforms with gold as a base color, but for the most part the gold would be relegated to a supporting role. The tri-color combination already looks great in the Brew Hoop logo.

Another good cultural reason for gold, of course, is that it would be a thread of connection to Wisconsin’s other two major professional sports teams, both of whom have used the color (in some form) since their inception. Some might argue that this is a homogenization of regional identity, but I would counter that it is rather a thread of unity. This is what the Bucks need as a franchise; the fan support of those who are already ardent supporters of the Packers and Brewers. Adding a little gold to the uniform obviously won’t make this happen alone, but it could be one positive step toward our goal of saving the Bucks. I can never resist a bad pun, so I’ll close with this:

Here’s a very crude rendering of what this concept might look like. It looks rough because I am not a graphic designer and I slapped it together using Microsoft Paint. The image also lost a lot of clarity in the uploading process, so please squint when you look at it. 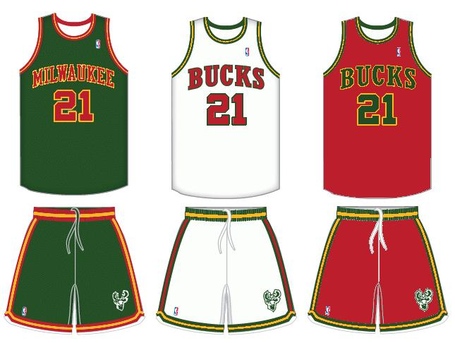 The sets are based on early Seventies Bucks uniforms, with gold added as a tertiary color. (L-R, Away, Home, Alternate) Number 21 may or may not be a Joel Embiid reference.

So how does the Brew Hoop community feel about uniform changes? I’m definitely not the only person to independently come up with the idea of the gold addition, and I’m sure that plenty of you have other ideas and opinions. We need something to talk about before the draft draws near, so let’s get the ball rolling on uniform changes.