Twelve months ago it would have been a stupid question; now, not so much. So it's both interesting--and dripping with irony--that Marc Stein earlier this week raised the possibility of the Dallas Mavericks pursuing Sanders this summer.

On the subject of using their cap space to upgrade via trade as opposed to outright signings, Milwaukee's Larry Sanders remains another potential target after an absolute nightmare season. Monta has never been better since the Mavs imported him from Milwaukee; could life with Nowitzki, Carlisle and Cuban have a similar effect on Sanders?

First off: the "OMG Monta is a different player!" myth seems to be going as strong as ever, but that's a whole separate matter. More to the point: Sanders and Ellis weren't exactly simpatico the last time they shared a locker room, so a reunion in Dallas would be...well, interesting. It's also probably a longshot given the many other potential scenarios Dallas will explore this summer, which Stein reports may include pursuing Carmelo Anthony, Luol Deng and Tyson Chandler.

Still, Stein's general reasoning also highlights why Sanders likely won't be an immovable object this summer despite a nightmarish season of injuries, inconsistent play and off-court misdeeds. Plenty of teams would love to have (and be willing to pay) a mobile shot-blocker to patrol the paint and contain pick and rolls, and for now there are likely still some that think Sanders can and will get back to what he was during his breakout 12/13 season. Dallas' cap space makes them an interesting potential partner given that they wouldn't necessarily have to send equal salary back to the Bucks, but the Sanders idea is just one of many they are likely explore.

Unfortunately for the Bucks, teams with an interest in Sanders likely aren't willing to give up a king's ransom to grant Larry a change of scenery--not after the trainwreck of a season he just endured. But if all the Bucks wanted to do was get rid of him for the sake of doing so? That can probably be arranged--but be careful what you wish for.

Salary-dumping Larry to the Mavs, Pelicans, Lakers, Celtics, Kings or Cavaliers would no doubt have its appeal to those who've had enough of Larry's shenanigans (SHENANIGANS!), but it's a roll of the dice no matter what the Bucks do. Personally: unless the Bucks end up with Joel Embiid on draft night--which for the record I wouldn't mind at all--I'll keep my optimist hat on and give Larry another shot at redemption. The Bucks need young impact players in the worst way, and right now Sanders is the only guy on the roster who has ever been in that category.

Woelfel | Sale expected to be approved by late next week
Gery Woelfel writes that Bucks owners-to-be Marc Lasry and Wes Edens met with team officials briefly in Milwaukee last Friday, with league approval of the team's sale from Herb Kohl expected by late next week. At the time of the sale announcement it was widely assumed that the league would approve the deal within 30 days, which would indeed be the end of next week.

Woelfel also has a subheading in his story about John Hammond being "rumored to Detroit," though in the actual story it seems more to be a dot-connecting exercise than an actual rumor (and yes, I realize the term "actual rumor" may be a bit of an oxymoron anyway).

I keep hearing former Toronto GM Bryan Colangelo and Boston assistant general manager Mike Zarren are at the front of the pack.

There has also been some chatter about the Pistons possibly bringing in an experienced GM and having him groom Chauncey Billups, the former Pistons star guard.

Could that be Milwaukee general manager John Hammond who, some league officials claim, is on the hot seat? Hammond worked in Detroit before taking the Bucks' GM job.

No one seems to know exactly what Lasry and Edens will do with the current front office and coaching staff once they officially take over, so it may be another week before we start to sort out how the Bucks will approach what may be the most important summer in franchise history. As for the other names mentioned in Woelfel's piece, you may recall that Colangelo had been rumored to be heading a potential Bucks ownership group before Lasry and Edens emerged victorious, while the up-and-coming Zarren has been a name we've discussed plenty over the past few weeks.

Milwaukee Biz Journal | Gimbel hopes for Millennium Park-like corridor connecting new arena to WCD
Wisconsin Center District chairman Frank Gimbel was last seen a month ago expressing hope that his $200 million expansion plans for the WCD could piggyback off a new arena tax, and this week he suggested that the two projects might be interlinked with a pedestrian corridor similar to the Millennium Park project in Chicago. Rich Kirchen of the Milwaukee Business Journal reports:

The pedestrian corridor will be included among the recommendations for a $200 million expansion of the convention center, Gimbel told the Business Journal Wednesday.

"It would be an all-seasons place for people to gather - kind of like Millennium Park," Gimbel said in an interview Wednesday.

For those unfamiliar, the WCD runs the Wisconsin Center convention hall as well as U.S. Cellular Arena and Milwaukee Theater, all three of which are directly south of the Bradley Center. So yeah, there's some obvious logic in connecting everything together, with full details to be released as part of a report that the WCD board will consider at a May 14 meeting.

If you're not familiar with the geography of the various projects, below is a map I yanked from Google Earth showing the WCD and Bradley Center as well as the vacant Park East Corridor that many have tipped as the most likely destination for a new multi-purpose arena (click to enlarge it). What's less clear is what would happen to the BC and US Cellular Arena (aka the Mecca, aka the BC's older, smaller and more outdated sibling) should a new downtown arena be approved. US Cellular Arena is already rather outdated, while maintaining the Bradley Center won't be cheap--BC boss Marc Marotta estimated last month that it would take $100 million over the next decade just to keep the doors open. A $450 million new arena never sounded so cheap, eh? 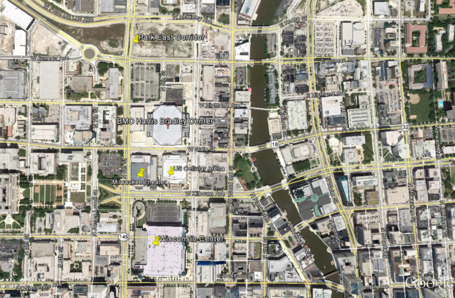 Bucksketball | You’ll Never Believe the One Crazy Trick Your Subpar NBA Team Could Use to Become a Contender
K.L. Chouinard looks at the important role the three point shot could play in bringing the Bucks back to respectability. Related: our man Alex Boeder took a look at the history of the three and its close ties to winning basketball over at Bucks.com last fall.

FIBA.com | Delfino holding out World Cup hopes
It's true: Carlos Delfino is technically still a Milwaukee Buck. And despite missing all of the 13/14 season following complications from a broken foot suffered during the 2013 playoffs with Houston, Delfino hasn't closed the book on representing Argentina this summer at the FIBA World Cup in September.

"Maybe Milwaukee will see it as beneficial for me to get up to speed and so I can arrive at the start of training camp with a little basketball.

"(Laughs) Hopefully the new owners see it the same way."

Normally I'd be staunchly opposed to an injury-prone Bucks player risking further damage while representing his country (I'm looking at you, Ersan), but in the case of a guy the Bucks don't appear to need and haven't seen on the floor in well over a year...well, knock yourself out, Carlos.

Delfino told Bucks.com in late April that he would be flying back and forth between Argentina and Milwaukee over the summer and hoped to be back on the court by July, giving him a couple months of full basketball activity before training camp kicks off in October. The World Cup (previously the World Championships) runs the first couple weeks of September.

JSOnline | Brandon Knight not choosy about No. 1 pick
Brandon Knight chimed in with his thoughts on potential Bucks draftees this week while making a radio appearance, and the bottom line is that, uh, he does not have much to add. Something, something, work hard, something, totally different mindset, something something. Via Charles Gardner:

"That's a tough question," Knight said in response to a question from former NBA coach Mike Dunleavy. "That's for our team to decide. I just want a guy, whoever he is, to come in and work hard and understand the type of year we had last year.

"He wasn't a part of it, but understand we can't repeat that type of season and that none of the guys here will be in a mood where that will be repeated. Our mind-set is going to be totally different. We're going to approach the game differently. We're going to remember how this year went for us and use it as motivation."