Debates about the future of NBA Draft prospects like Jabari Parker and Andrew Wiggins can highlight disagreements between scouts and statistical models, but what if we step back and focus on broader agreements?

As we close in on June 26th and the 2014 NBA Draft, I find myself growing weary of the debates surrounding Joel Embiid, Andrew Wiggins, Jabari Parker and Dante Exum. It's a strange feeling, considering there hasn't been a more exciting time for a hardcore Milwaukee Bucks fan since at least the Fear The Deer run of 2010, and probably more like the Light It Up-era Bucks.

We've never been better prepared as a fanbase heading into a draft. The availability of game footage, advanced statistics and excellent draft content is at an all-time high, and anyone willing to watch the games and scour sites like hoop-math.com, DraftExpress, ESPN, DeanonDraft.com, Layne Vashro's EWP model, etc. can become well versed on the top prospects along virtually every dimension imaginable.

We already know about Wiggins' half court vs. transition finishing splits, Parker's struggles against length, Exum's limited exposure and possibly shaky shooting and every other big draft storyline that could impact Milwaukee. The wealth of information at our fingertips doesn't always make life easier, however. Certain preconceptions and biases are now embedded in every draft conversation.

Parker may be a tweener at the next level who may struggle to find a defensive position and gets frustrated by longer NBA defenders. He may never hit threes at a high enough rate to become a top-tier stretch PF, and he may not be quick enough to consistently beat perimeter defenders.

Wiggins may never develop the elite halfcourt handling and finishing skills to take his offensive game to the next level. Furthermore, his defensive value isn't guaranteed to make a huge difference in the NBA. NBA Finals MVP Kawhi Leonard is about as good as it gets for a wing defender, and we just watched him win the MVP largely for offensive production—not for "limiting" LeBron James to 28.2 PPG on 67.9% TS, 7.8 RPG and 4.0 APG in the series.

Very few wing defenders provide serious value. On ESPN's Real Plus-Minus defensive leaderboard, only six players in the are listed at a position other than PF or C: Andre Iguodala, Draymond Green, Eric Bledsoe, Paul Pierce and Tony Allen. It's a tough hill to climb to become an elite perimeter defender, and even when you reach the top your value may be marginal when trying to stop the best scorers on the planet.

If you frequent the site and interact with us in the comments section, you already know about my official stance on "safe pick" analysis. 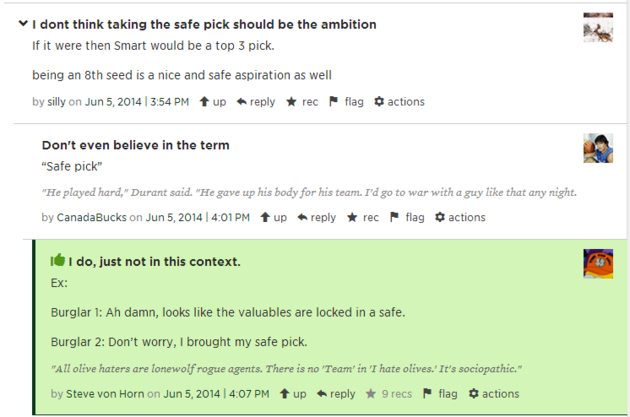 That said, I'm all for people digesting the best available information and using it to offer up an educated guess. The debate between Parker and Wiggins has been especially interesting, because there's a gap between what scouts think and what analytical draft models project. The scouts seem more concerned about Parker, while analytical models seem more concerned about Wiggins. In general, analytical models take box score inputs and then adjust for pace, age, level of competition, basic combine measurements and other factors to arrive at NBA projections. Here's a quick snapshot of Wiggins and Parker, with some help from Sport-Reference.com and DraftExpress.

Now here's the comparison between the latest NBA Draft Big Boards from DraftExpress, ESPN and the Expected Wins Peak (EWP) draft model developed by Layne Vashro. Remember that Layne's Humble (HUM) model uses DX and ESPN big boards to adjust prospect ratings. If you need a refresher on the EWP and HUM, make sure to check out the excellent podcast Layne did with Ian Levy of Hickory-High. 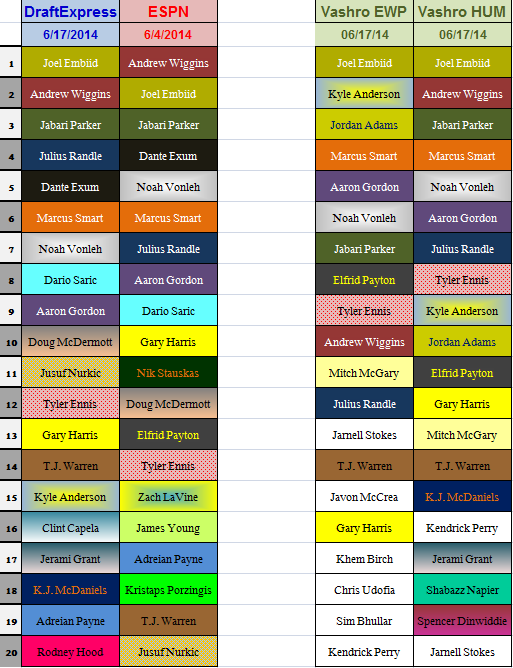 If we skirt the reductive stats vs. scouts debate and simply agree that both inputs are important to consider, the chart shown above presents some interesting information. The broad agreement on Joel Embiid and Marcus Smart bodes well for both players, while the severe split on Wiggins may be a cause for concern. International prospects don't get rated in Layne's model, hence the absence of Exum, but Kevin Pelton's WARP analysis of Exum's performance at the FIBA Under-19 World Championships suggests a favorable consensus for him as well. Meanwhile, Parker falls somewhere in the middle for this basic comparison, and he doesn't rate out as truly elite in either list.

My unofficial "safe pick" analysis flows from the following principle: close agreement between stats and scouts on a top prospect is always preferred for "safe" projections, and when there is a big disagreement from either side the prospect becomes riskier. Stats can help tell you whether a given prospect is already on track to become the player scouts project him to be as a pro.

To get a grasp on what scout-stat disagreement has meant to top prospects in the past, I used Layne's RETRO EWP data to look at top draft prospects since 1998 with an (EWP+HUM)/2 >9. From there, I calculated the difference between EWP and HUM ratings to look at the largest discrepancies between the statistical model and scout-adjusted output.

Here's the list of top players favored most heavily by the statistical model. 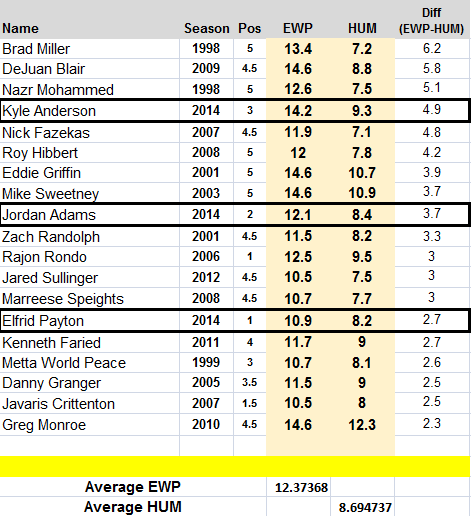 In general, these players seem to be less athletic guys with higher skill levels coming out of college. There aren't any overwhelming stars on this list, but in many cases the scouts won out when it came to actual draft position for these prospects. These guys are potential draft steals, rather than top-five timber. Note the presence of Kyle Anderson, Jordan Adams and Elfrid Payton on this list.

Now here's the list of top players favored most heavily by scouts and adjusted upward in the HUM version. 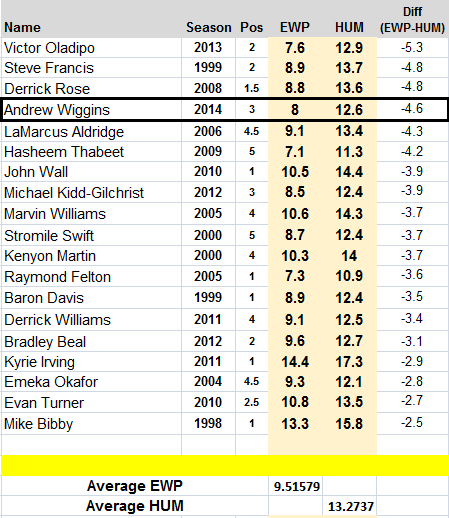 It seems like more athletic players populate this list. Again, it is important to note that the scouts generally won out on actual draft position for many of these players. If these players look better than the previous list, it's because they should. This is basically a collection of top-five picks, so the presence of guys like Michael Kidd-Gilchrist, Hasheem Thabeet, Marvin Williams, Stromile Swift, Raymond Felton, Derrick Williams and Evan Turner needs to be kept in proper perspective. The added risk of disagreement between scouts and stats is evident, if not overwhelming or conclusive. It scares me a bit that Andrew Wiggins has one of the lowest EWP values on this list, along with Felton, Thabeet, Oladipo, Swift and Kidd-Gilchrist.

Finally, here's the list that represents the closest agreements between the two approaches for top talent since 1998. 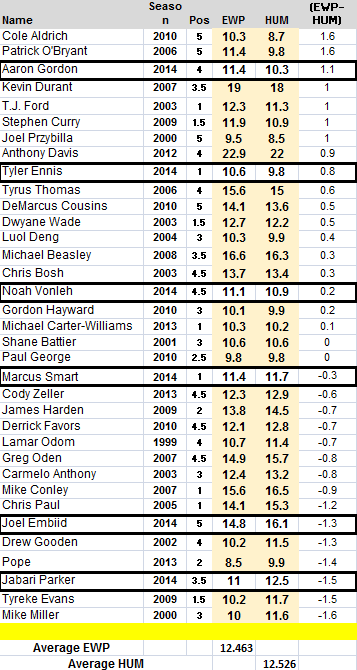 My first thought: there are a lot of really good players on this list. My second thought: isn't it interesting that Jabari Parker, Joel Embiid, Marcus Smart, Noah Vonleh, Tyler Ennis and Aaron Gordon all appear on this list with a lot of really good players. If you notice anything that pops out at you on any of these lists, let's talk about it in the comments section.

I don't intend to conclude this article with any grand pronouncement about who will become the better player at the next level, but I do intend to muddy the waters for all the draft enthusiasts out there. The disagreements between stats and scouts draw most of the attention in debates leading up to the draft (one side is clearly right! ... right?), but maybe the important thing to do at this time of the year is to focus on which players generate the most agreement.

I can't say for sure this is the right approach, but it's probably worth considering.