Share All sharing options for: Milwaukee Bucks Arena Latest: Lakefront out, officials from Oklahoma City, Cleveland, and Denver share their experiences in Milwaukee

Reminder: for a complete summary of everything related to the new Bucks arena debate, check out our updated FAQ here.

JSOnline: A new arena on the lakefront? Unlikely
We're not yet at the point of knowing where a new arena will go, but it does seem like we are starting to have an idea of where it won't go. Don Walker reports:

But in interviews with key players in the arena debate, some of whom are unwilling to talk on the record, the consensus is a lakefront location is not in play.

"It's not going to happen," said one source who is involved in the discussions with new Milwaukee Bucks owners Wes Edens and Marc Lasry. "It's off the table."

Edens himself feels the same way. He told the Journal Sentinel that he has looked at different sites and prefers a downtown location.

"Milwaukee is blessed to have a handful of different alternatives," Edens said. "We toured the lakefront. My preference is to be in the middle of downtown."

So while the idea of finding a cold-weather anchor of activity near the Summerfest grounds had some theoretical appeals, Walker suggests that a larger entertainment district close to the existing Bradley Center remains the preferred destination. No arguments here.

Milwaukee Business Journal: Latest arena-site speculation: Journal Communications + Panther Arena
Speaking of the area around the BC, Rich Kirchen suggests that there may be an additional option downtown option beyond the vacant Park East corridor or the parking lot north of the Bucks' current home: the Journal-Sentinel headquarters and the old Mecca Arena (now Panther Arena) across 4th Street.

The location would achieve the goal of some leading city planners and city leaders for the new arena to be built as close as possible to Wisconsin Avenue two blocks to the north. Journal Communications occupies only a fraction of floorspace in its buildings after relocating its printing presses and trucking operation and downsizing its employment in recent years.

"The Journal Sentinel is totally underutilized space," said one Milwaukee commercial real estate insider. "They’ve got prime real estate and it’s a waste of space for them to be there."

Note to the JS: the MBJ is located across the river about five blocks east of the JS building. YOUR MOVE. 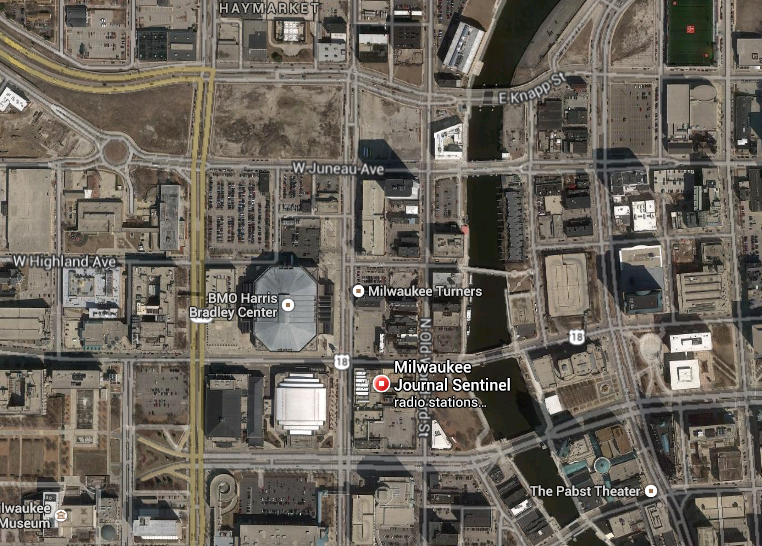 Biz Times: What have other cities done?
Officials from Oklahoma City, Cleveland, and Denver shared their experiences funding cultural assets with Milwaukee business leaders last week, and Andrew Weiland of BizTimes.com has a good summary of their experiences above. As mentioned in our FAQ, those cities along with Pittsburgh and St. Louis were discussed in the Public Policy Forum's March 2014 report on funding options for a new arena.

Meanwhile, our buddy Paul Henning of Save Our Bucks also stopped by WTMJ to talk about it with Doug Russell (audio below).