I'm not going to lie: while I'm certainly hoping for big things from Giannis Antetokounmpo this coming season, I also don't want to fall into the trap of expecting a huge breakthrough.

After all, he's still just 19, and with only a single season of high-level competition under his belt, it's probably not fair to demand a leap into the league's elite right now. Beside that there's also the self-preservation side of it--after two decades of Bucks fandom and numerous false starts, I'd rather play the "under-promise and over-deliver" game than put the weight of the world (or at least Milwaukee) on Giannis' still broadening shoulders immediately.

But as tempting as an overabundance of caution might be, it's always good to find reminders that we're not crazy for thinking Giannis could be special. And, as ESPN's Bradford Doolittle writes, that could come sooner than many of us have been expecting. Doolittle's 14/15 WARP projections show Giannis catapulting to sixth among all small forwards with 8.8 wins above replacement, a huge leap from the 1.4 he registered a year ago.

The system sees Antetokounmpo as a likely contender for the league's most improved player, a statistical observation that one could also have made by watching how his game blossomed over the summer. The chief aspect of his profile that stands out is his positive offensive RPM, which combined with his 3-point shooting, burgeoning floor game, size and tender age mark him as a standout prospect. Can he really go from replacement level to 8.8 WARP? The best players make the leap at a young age. This could be the time for Antetokounmpo.

Yes, you read it right: Doolittle's RPM-based projection model pegs Giannis as producing more wins above replacement level than guys like Andre Iguodala, Chandler Parsons, Kawhi Leonard and Rudy Gay...next year. You certainly wouldn't have guessed that from eye-balling his raw numbers or even most of his "advanced" stats like PER and win shares (both solidly below average), but his +0.66 offensive rating as the youngest player in the league implies the same kind of offensive upside we saw in flashes all season. Most teenagers simply don't make their teams better on either end, but RPM--which takes regular plus-minus data and then controls for variables like teammates and opposition--suggests Giannis did just that on the offensive end.

Defensively the data isn't as encouraging (-1.80), but that's probably less damning given how much rookies of all shapes and sizes struggle to cope with pro defensive systems and the physicality of defending NBA players. Giannis also dealt with some different challenges given he played out of position against shooting guards for much of the season. Either way, this is one of those happy situations where the eye-test matches what the advanced analytics suggest in a holy-crap-this-kid-could-be-good kind of way.

As for the here and now? We're still about five weeks from camp opening but just one week from Giannis' FIBA World Cup debut next Saturday in Spain. In a final warm-up before the games start to count, Giannis followed up his 12-point effort for Greece against Turkey on Wednesday (some more complete highlights of that above) with a more modest 5-point (2/4 fg, 1/2 threes), 5-board effort in the rematch on Turkish soil Friday. Giannis started and had some early foul trouble, but Greece still came away with their second win in three days as Giannis did his share of little things on both ends--a blocked shot and forced turnover on the defensive end, an acrobatic alley-oop layup and give-and-go assist in transition on the other. Here's the box score: 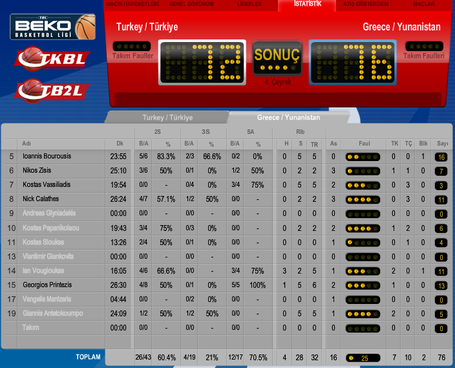 As a Bucks fan you'd of course love to see Giannis with more opportunities to create plays off the dribble, but for now Greek coach Fotis Katsikaris seems intent on integrating Giannis more slowly into the national team setup. Our friend Alex Gkoussis sent us this translation of Katsikaris' interview this week on that very topic:

"It is something we've never experienced before, having a kid appearing out of nowhere and playing so soon in the NBA and in the Greek national team. He needs special treatment when on the court,in training...everywhere. We have to be cautious. He is a kid that provides the team with so much energy when he is on the court and when he stretches his hands. He helps a lot defensively and in the open court he also has a lot of advantages. The good thing is that he doesn't necessarily have to score, but he knows the team needs his energy, so anything more than that would be a plus."