Caponomics: Assessing the impact of the Bucks' trade for Jared Dudley and signing of Damien Inglis

Share All sharing options for: Caponomics: Assessing the impact of the Bucks' trade for Jared Dudley and signing of Damien Inglis

This just in: Jared Dudley is a Buck (for now). Carlos Delfino and Miroslav Raduljica are not.

OK, so by now you've probably heard about Tuesday's big-by-late-August-standards trade between the Clippers and Bucks, one that saw Milwaukee add a distant first rounder (probably in 2017) at the cost of two non-essential players, the 2015 second rounder that the Bucks ironically got from L.A. in last summer's J.J. Redick deal, and the potential obligation to pay Dudley $4.25 million in the 15/16 season. Later in the day Milwaukee also officially announced the signing of 31st overall pick Damien Inglis, the 19-year-old native of French Guiana whose official signing was only a matter of time.

So what does it mean for the Bucks now and what could it mean down the road? Let's start with an updated snapshot of Milwaukee's cap situation: 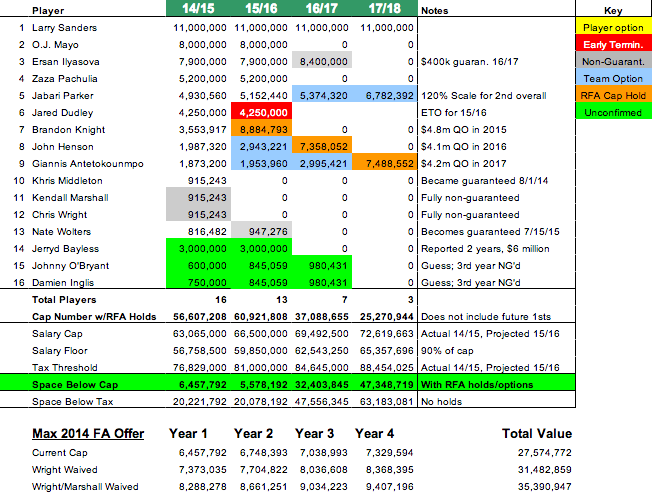 The Deal with Dudley

While the Clippers' motivations today were almost entirely financial in nature, the deal for Milwaukee looks like a modest but clearly positive one on a few levels:

Along with the official signing of Inglis, the Dudley deal should leave the Bucks with around $6.5 million in potential cap room with Wright and Marshall on board, bumping to around $7.4 million if Wright were waived. That's also assuming the renouncement of the Bucks' MLE, BAE and the free agent rights to Ramon Sessions, whom the Bucks could theoretically still sign-and-trade to Houston thanks to their cap space (ie they don't need his Bird rights so long as his salary is less than the Bucks' cap room...which it would be).  I wouldn't hold my breath on that--I don't know what the Rockets could offer that the Bucks would actually want--but then again I wouldn't have expected Delfino and Raduljica to facilitate the acquisition of a first round pick either.

The obvious downside of the Dudley deal is also why the Clips were so intent on moving him: unlike Delfino and Raduljica, Dudley can decide himself whether he wants the $4.25 million owed to him in 15/16 or if he opts out to become an unrestricted free agent. If he did opt in, the Bucks as currently constructed would have under $6 million in potential cap space before accounting for the cap hold of their 2015 first round pick but including a nearly $9 million cap hold for potential restricted free agent Brandon Knight. The first round hold is a number that could be up to $4-5 million if Milwaukee ends up near the top of the draft again, and in that event they would just keep their mid-level exception since they'd have more money to spend operating over the cap than under it.

Of course all of this assumes the roster doesn't change between now and next summer, which is quite unlikely. Dumping any of the Bucks' big contracts (Ersan Ilyasova, O.J. Mayo, and Larry Sanders) to a team with expiring deals or a trade exception would provide significantly more cap flexibility, which may or may not be useful. Much greater flexibility would be projected for the summer of 2016, when Mayo, Ilyasova and Zaza Pachulia would come off the books and leave the Bucks with a mostly blank slate.

So the bottom line is that John Hammond, David Morway, Jason KIdd, et al deserve a nice golf clap for their efforts this week. The Bucks got closer to a final roster, upgraded a future draft pick, didn't have to give up any real roster assets, and only sacrificed a modest amount of summer 2015 flexibility to do it. It might not be a home run, but for a lazy day in late August? You couldn't ask for too much more.