Counting down the Milwaukee Bucks' most valuable assets - Adios Carlos

Injury concerns and a lack of available playing time are a major drain on Delfino's value.

Share All sharing options for: Counting down the Milwaukee Bucks' most valuable assets - Adios Carlos

We've gotten things cleared up a bit, everybody seems to know the rules, and now we're cooking with gas!

We're counting down the most valuable assets on the Milwaukee Bucks roster. With two votes in the books, Least Valuable Asset O.J. Mayo is now joined by Carlos Delfino, who signed a three-year deal (unguaranteed final year) last summer but didn't play a single minute for the Bucks in 2013-2014.

Delfino looked like a decent addition on the wing for a small price when he signed last summer. He was a pretty good three point shooter capable with surprising athleticism that manifested from time to time, and his familiarity with the organization was seen as a plus. However, the broken foot he suffered early in the playoffs as a member of the Houston Rockets, originally expected to hold him out of training camp and maybe a few games, ended up costing him the entire season due to a setback during his rehab.

Now Delfino is presumably healthy, but there's suddenly a lot less room for him. Khris Middleton played better than expected last year, the Bucks added some depth at guard in free agency, and Giannis Antetokounmpo is the most deserving candidate for small forward minutes. If Delfino is able to play at, it's likely to be in spot minutes off the bench, and there's always a concern that his injuries have sapped his ability beyond the point of no return.

Is Delfino's veteran presence and minimal production on the court worth his $3.25 million salary? In absolute terms perhaps, but in the context of the Bucks' roster, he's a very forgettable piece. That his contract effectively expires after this season does make him a bit easier for the Bucks to deal, but without any evidence that he can be productive for a winning team, it's hard to imagine the return would be anything worthwhile. As such, our voters elected to make him the second player let go in our make-believe expansion draft, narrowly defeating Chris Wright at the polls. 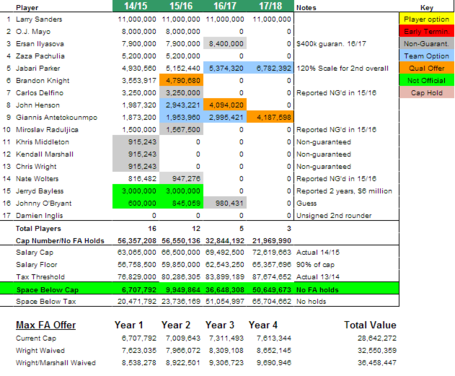