Counting down the Milwaukee Bucks most valuable assets - Nuh-night, Knight

Milwaukee's young guard showed enough promise in his first season with the Bucks to earn the 4th spot on our list.

Share All sharing options for: Counting down the Milwaukee Bucks most valuable assets - Nuh-night, Knight

In our last few polls we've reopened the question of what "value" really means, and what we're really voting on in these rankings. Prior to our latest poll, the choice seemed to come down to a decision between two players:

Ultimately Brandon Knight made it through the cut thanks to strong support from fans optimistic that his physical talent and strong work ethic would continue to guide him to new heights as a player.

Our latest poll presented a different dichotomy though, and this time Knight couldn't overcome the most tantalizing asset of all for an up-and-coming small-market team: possibility.

There is no asset in the Bucks' possession with the same mix of uncertainty and promise as the team's 2015 first-round pick. We don't know where in the draft it will fall. We don't know who will be available to select. We don't even know who we will want the team to select yet. But a first-round pick is the ultimate investment in the future. It's a young player to be molded into a superstar, not to mention four years of cost-controlled talent. Knight might be a good young player with plenty of room yet to improve, but the pick could be anyone, anything! That's a hard thing to overlook for a fanbase that's just gone through what Bucks fans have.

It doesn't have to be a knock on Knight anyway. Even if Knight continues to improve, he's only going to be inexpensive for one more season before the Bucks (or some hypothetical trade partner) have to make a major decision. That matters a lot in this exercise. So I wouldn't recommend looking at this result as a suggestion that Bucks fans want to move on from Knight with a first-round pick that could or should provide an upgrade. It's just that people love first-round picks. 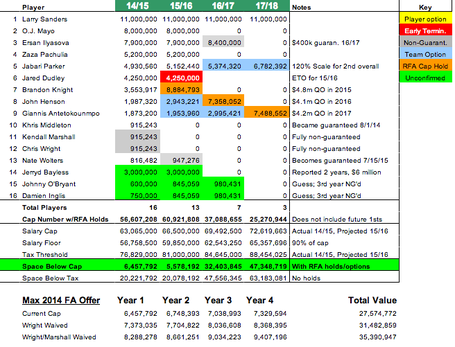