Walker: Bucks owners hope to pick site for new arena by year's end
Don Walker's latest at the JS reiterates the same timeline we'd heard previously on an arena: site selection by end of year, with the tricky issue of public funding to be taken up at the start of 2015 (namely, once those site specifics are clear and the dust has settled from the fall elections). Walker also summarizes the leading candidates for the final site, including the Journal Communications building itself. I guess the Journal has officially put its "for sale" sign up, eh?

Sources involved in the arena debate say land located directly north of the BMO Harris Bradley Center is in the running. That land, located between N. 4th and N. 6th streets, and between the north side of the current arena and W. Juneau Ave., is big enough for an arena.

Walker's piece also includes a number of quotes from Bucks owner Wes Edens--be sure to give it a look.

Prominent Milwaukee commercial real estate development firm Zilber Ltd. is weighing in on a site for a new arena by supporting a downtown Milwaukee parcel at North Fourth Street and West Wisconsin Avenue that is a city-owned surface parking lot located just west of the Shops of the Grand Avenue.

Although some observers believe the site is too small for an NBA arena, Zilber executive Mike Mervis told the Milwaukee Business Journal it would be 6.24 acres, including the Boston Store parking structure to the south. That is a larger footprint than the Barclays Center, which opened two years ago as the home court of the Brooklyn Nets. It is just east of the Hilton Milwaukee City Center.

To get a better sense of all four options you can check out the map below (listed sites outlined in orange): 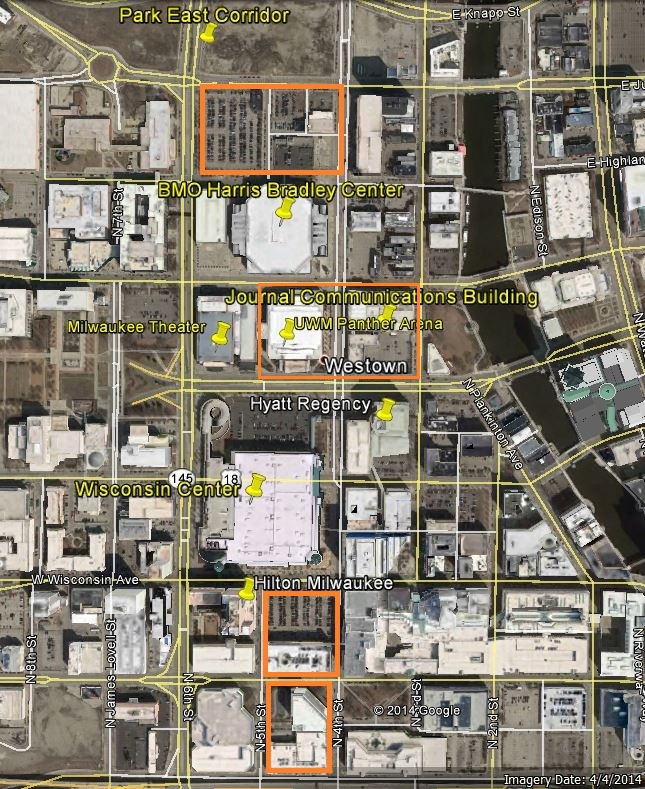 In order from north to south:

Three of the four are essentially just parking structures/lots at the moment, with the Journal/Panther Arena site the only one involving a more complicated demolition. Considering the importance of containing costs and keeping a tight timeline, that's probably not a coincidence.

Bucks Partner Summit
It didn't get much press (link above is to the RealGM crew's discussion, but the Bucks' held their annual "Partner Summit" this week, with the organization's big hitters--Marc Lasry, Wes Edens, Jason Kidd and Jabari Parker--all in attendance and making their pitch to sponsors and stakeholders. Last year this was the forum where we heard Adam Silver raising (or reiterating) the alarm on the Bradley Center's long-term viability, though I'm guessing the tone was likely a bit more energized this time around.

Biz Journal: MPS board committee supports Common Ground athletic facilities 'dream'
Community advocacy group Common Ground first popped on our radar back in April, when they proposed that any hypothetical public funding mechanism for a new Bucks arena also be used to pay for at least $150 million in renovations for local schools' athletic fields.

This week they were back in the news after proposing a first phase of projects that would upgrade 11 play fields at a cost of $63 to $70 million. To put that in perspective, the 2014 Milwaukee Public Schools overall budget is a little under $1.2 billion. The group is hoping to have the MPS board adopt a resolution to study the plan without any fiscal commitment from MPS, with the goal of piggybacking funding at a later date when discussions around funding the Bucks' arena project begin. Stay tuned.

To illustrate, assume that $500 million is a good cost estimate of the arena and the recent sale price of $550 million represents the value of the Bucks franchise; the total investment in the business would then be $1.05 billion. If taxpayers picked up $300 million, their share would be 28.5% of the total value of the enterprise. Suppose with the passage of time, the team is sold for $950 million. Under our "taxpayer-as-investor" proposal, taxpayers would enjoy 28.5% of this increased wealth, or $114 million.

By offering taxpayers a chance to invest with the same expected rate of return that savvy private investors will enjoy, the supporters might be able to gain enough public financial support to keep the Bucks here.

On a simplistic level the idea would seem to solve the concern over owners "hiding" returns in franchise appreciation from other stakeholders, an issue that was similarly raised by players during the 2011 CBA negotiations. And if nothing else there's appeal in better aligning stakeholders in terms of the returns on their investment and the general sense of city "ownership" in a franchise. It wouldn't be as extreme as the Packers' unique public ownership model, but there would be something cool about the city having a more formal tie to the team.

Of course, the devil is in the details. For one, the Bucks aren't the only stakeholder using or benefiting from a hypothetical new arena, and ownership may well have little interest in managing a new arena for the 300+ nights a year that it won't be used for Bucks games. So if the city now effectively owns part of the team, would the Bucks be given a partial share of ownership in the arena?  All of it? At a minimum, we'd presumably see more arena revenues flowing to the team and less to debt service in that scenario, right?

Thinking through it a bit, this type of mechanism likely wouldn't serve to lower taxpayers' funding requirements in the short term--or however long the Bucks remain under current ownership. All other things being equal, you'd think it would actually raise taxpayers' up-front commitment (which would then be spread out via some type of bond issuance) since they're now getting part of the upside. At least, you'd expect so if the owner is a half-decent negotiator--if they're just going to give away equity upside without something in return then obviously taxpayers will gladly take it.

So that could actually mean a very long period of relatively higher debt service borne by taxpayers, with no certainty around when the benefit of a franchise sale might occur. What if Lasry and Edens own the Bucks for 30 years?  Is it actually preferable from a policy standpoint for taxpayers to see potentially higher costs for three decades and then realize a one-time payment in three decades? Long story short: This is a very interesting idea in theory, but it ultimately may not be appealing for either side.

Now let's turn it over to you. What site(s) look most promising to you? What other factors might make you more or less interested in the idea put forth by Kroncke and Holahan?