In the Bucks-Pacers post game thread, OldResorter1, pointed out that when the Bucks opponent shoots well from three, the Bucks lose. I decided to run some numbers and replied with some analysis. It got jumbled up, so I am recreating it here.

I went to basketball reference and downloaded the team defense stats for every team from 2017 to 2021. If you would like to play with the data yourself (or check my work) you can find it at this link. To look into how opponent three point field goal % affected winning, I ran a linear regression for 3PT% and winning. I also decided to run one for 3PT% and Points allowed, to see how opponent shooting impacted overall defense. I also looked at 3PA allowed, since the common thought nowadays is that the best way to defend the three point line is to not allow teams to shoot threes. Here are the results:

Still negative but virtually no correlation, not to mention the slope is miniscule, for every 10 more 3PA you win 1 fewer game. What about the effect on defense, rather than winning?

Again the relationship we expect, a higher opponent shooting means a worse defense, but an even smaller correlation. The slope says that for every 1% increase in opponent shooting, you allow 2 more points. However, with only a .15 R^2 I don't think we can say this is significant. What about attempts allowed vs points allowed?
3PTA vs Points: y = 0.689x + 87.68 | R² = 0.3087

So this is the strongest correlation so far. The slope tells us that for every 10 more three point attempts you allow, your defense is 6 points worse. 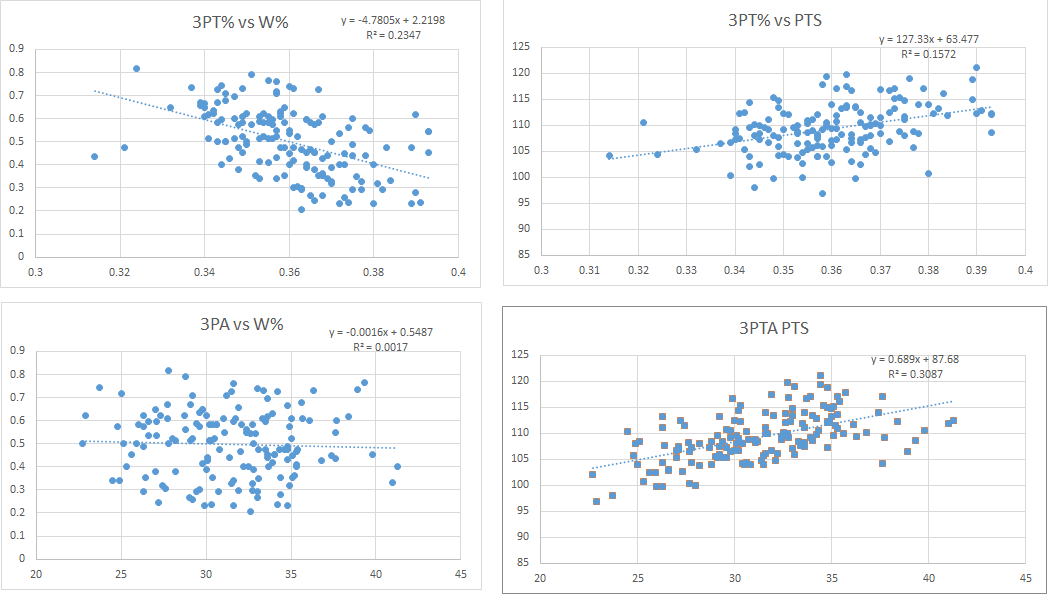 Since I had the data, I decided to look at 2 point field goals as well. Here are those results:

Similar to 3PT%, there is a negative relationship, and a decent, albeit small correlation. The slope is similar: for every 1% increase in 2PT% you will win 3 fewer games. What about two point attempts allowed?

Once again there is basically no relationship between the number of two point attempts you allow and winning. Those in favor of the "Stop allowing 3's" theory may want to point to the slope here. It says for every 10 MORE two point field goals you allow, you win 4 MORE games, but again the correlation just isn't there for this to be convincing. What about 2PT% and your team defense?

Here there is a much stronger correlation than we have seen to this point. In this case every 1% better your opponent shoots, you allow 1.5 more points. A .35 correlation is quite strong for this analysis and really supports the idea that better two point defense makes for a better defense. Lastly, what about 2PTA and PTS?

Nothing to see here with another tiny R^2. If you are interested, given the correlation you shouldn't be, but for completeness, this slope says for every 10 more twos you allow, your defense allows half a point less.

Again here are the graphs if you are a more visual learner. 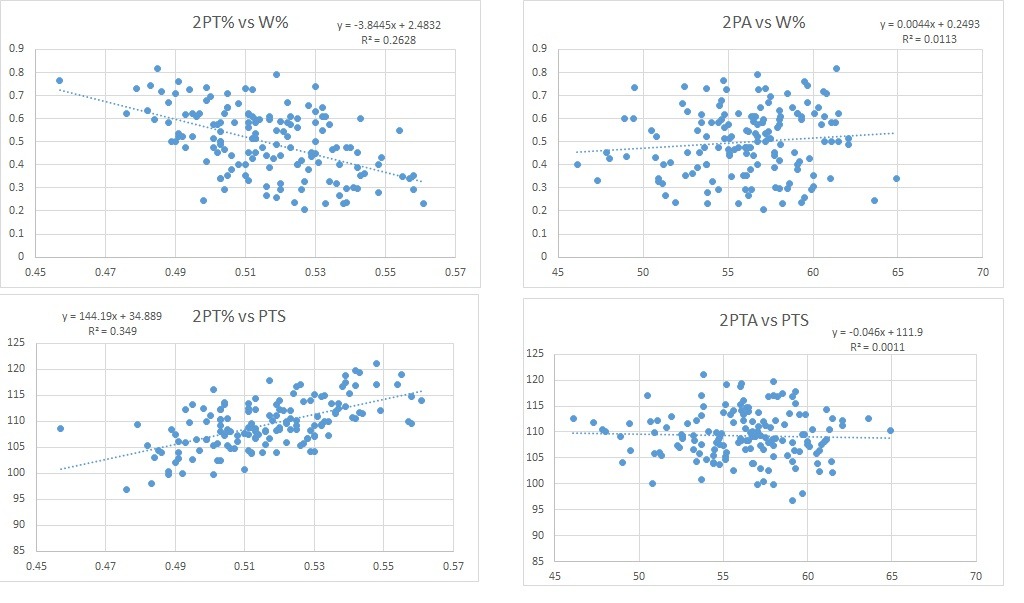 The last thing that I wanted to look at is the idea that we should give up more twos in favor of more threes. For this I created a new column in the spreadsheet, column Z, which is 2PA/3PA (the ratio of two's to 3's). Again here are the results:

There is once again no correlation found. The ratio of 2's to 3's you allow does not seem to affect winning at all. This is probably because there are too many confounding variables. Again, for completeness, I was trying to find a good way to explain the slope. But the correlation is so small and the slope so complicated, it isn't worth it. What about this ratio and it's affect on points allowed?

Interestingly, there is a correlation here, at least when you compare it to the other correlations we found (.19 is small but bigger than some others in this analysis). The slope is negative, so it is saying that if your threes go down, relative to your twos, you will have a better defense. One way to think about this: if you allow the same number of attempted two and trees, you will allow seven more points than if you allow twice as many attempted twos as threes. When I type it out that way, the effect does not seem to be all that meaningful. For example, if you go from 30-2's and 30-3's to allowing 40-2's and 20-3's, your defense will get 7 points better (by this analysis). Here are those graphs: 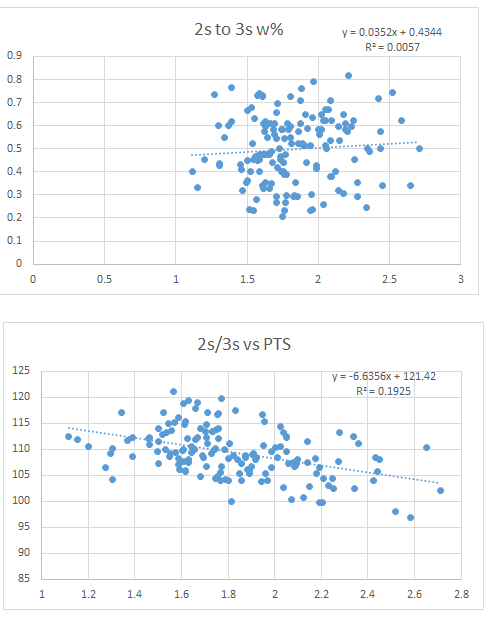 One final thing before I close that I found interesting: I ran these numbers using 2017-2021 to include a large sample that was after the three point revolution. I wanted to include 2021, because many believe that this year winning is even more impacted by opponent three point shooting than in the past. I figured eliminating 2021 would open me up to criticism that I was eliminating the most important stretch of games. However, it may make more sense to do this analysis without 2021, given that we are only 20 games into this season. Thus, I repeated the analysis without 2021. Here is what I found there:

Amazingly, the highest correlation now is that between three point percentage allowed and winning! The slope on it says that for every 1% better your opponent shoots, you win 6 fewer games. So both a bigger effect and more correlation than we found above. This is interesting in that it shows this year's data is actually bringing down the effect of 3PT% on winning. The other wild thing I notice here is the persistence of the paradox that 3PT% really matters for winning, but not really for defense (the correlation with points allowed is very small, .09l). Similarly, 3PTA correlates strongly with allowing fewer points, but not at all with winning. Someone smarter than me will have to explain what is going on there. If you are interested in the non-2021 analysis for 2PT defense here it is:

This time there isn't any difference when we exclude this year. The data still tells us that lower 2PT% is correlated with winning with a slightly higher slope than when we included 2021. Perhaps intriguing is that the effect of 2PT% is smaller than 3PT%. A 1% increase in opponent 2PT shooting costs you 3.3 wins, whereas it costs you 6 if it was a 1% increase in 3PT%. Another interesting point, the paradoxical relationship seen with 3PT% does not exist; 2PT% correlates with better defense as well as winning. Again, I'm not sure what to make of that.

The other consideration that I had was that 2017 was maybe going too far back in time to capture the shift to letting it fly from three. However, when I eliminated 2017, nothing changed.

So what conclusions can we draw from this data? I think the correlations and slopes are such that you could make a lot of claims, but there isn't great evidence to back up any one. The one thing that I think can be concluded: there is no evidence that winning this year is more impacted by opponent three point shooting than in the past.