I recently commented that I am not all that interested in the Bucks acquiring another rotation player. My thought process was that the Bucks top 9 right now is pretty solid (with Bobby, PJ, Pat, Bryn). And you can fill the positional needs opened up by DJ Augustin's departure by simply shifting Donte to DJ's role and filling Donte's with Pat. Upgrading on one of the top 9 is easier said than done, given how Pat and Bryn have played this year

Some of you responded, or commented elsewhere, that the desire for a backup Point Guard was more for regular season depth and insurance against injuries. That makes a lot of sense. Considering the players available and the Bucks tradeable assets, though, it does seem like the Bucks top 9 of today will be the top 9 as they start the playoffs, barring injury). So I decided to think about what a playoff rotation would look like. Here is the ideal substitution pattern I came up with. You can come up with your own, or scrutinize mine, but that isn't the reason I decided to write a fanpost.

I decided to write a fanpost because this process lead me to a question, the title of this post: Who should the Bucks stagger with Giannis: Khris or Jrue?

For years, Bucks fans have been asking for Bud to better stagger Khris and Giannis. Stop playing all bench lineups and ensure one of them is on the court. By adding a legitimate third star, the Bucks can do a three legged stagger and vurtually eliminate minutes where all three are on the bench. Fivethirtyeight recently had an article on NBA lineup staggering that included this very helpful graphic about how the Bucks have been running their lineups this year: 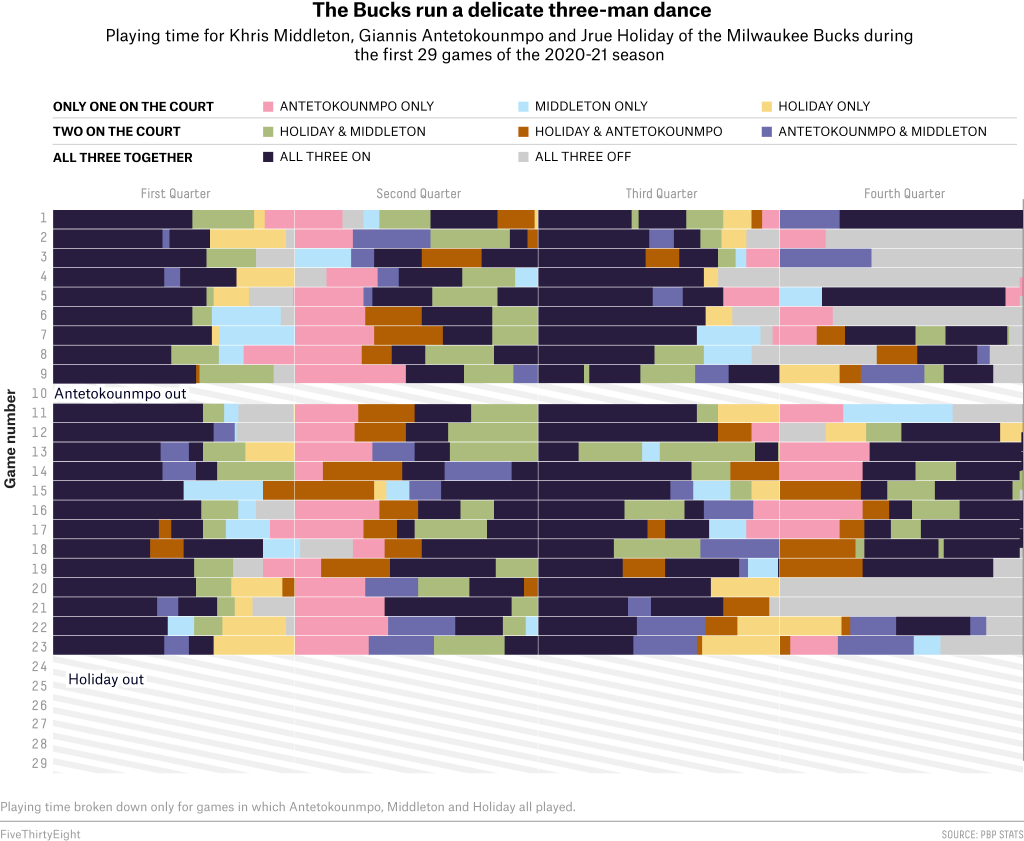 Adding a third star makes the Bucks much better and their substitution patterns much easier. However, there will now be some minutes with just one of the big three on the court. From the graphic, it looks like Giannis spends the most time alone. That makes perfect sense, he is the best player, he can carry a lineup with more ease than the other two. Similarly, Middleton+Holiday is the most common pairing. Again, this seems to be optimal as the best way to carry the Giannis rest minutes is to have your other two stars on the court. My questions is which of Holiday and Middleton should have the highest share of single star minutes? I think there is a case for either.

The Case for Khris
Khris is the second best offensive player on the team. He has the second highest USG% on the team. It seems obvious that having one of Giannis and Khris on the floor at the same time is the best way to keep the offense from slowing down. In fact, this is the second most frequent solo star lineup the Bucks have used, 424 non-garbage time possessions, 202 minutes. Predictably, the offense has maintained its level. In those 424 possessions, the offense has a 116.7 ORTG and in those 202 minutes they have scored 500 points, good for 119 Pts/48 minutes.

However, Khris on the floor without Jrue or Giannis has been horrible this year, a -12.8 Net Rating! In those 202 minutes, they have allowed 541 points (129 Pts/48 Min). You don't have to look too far in the past to find a time when this was not the case. Last Year, Khris without Giannis was a +5.4 Net Rating. Khris without Giannis and without Bledsoe was a +9.7!

In answering who should be the most frequent solo star (outside of Giannis), the case for Khris is basically that (a) it is the one they are the most comfortable with, (b) it allows the offense to maintain its really high level, and (c) even though it has been awful this year, last year he carried the lineup without help so going forward we should expect him to do it again. But maybe this year there is a better option.

The Case For Jrue
While Khris is clearly the second best offensive weapon the Bucks have, Jrue is clearly the second best defensive weapon. Considering he is the team's nominal starting point guard, it is logical to think he could effectively lead an offense consisting of multiple bench players. This off season the Bucks notably added offense to their bench rather than defense. Bryn Forbes and Bobby Portis are offense first players and Pat Connaughton, as much as Bud seems to edisagree, is certainly not a stopper. Perhaps the second best option for the solo star role is to keep the defensive second fiddle on the court while the two offensive stars rest.

Looking at the stats, Jrue has been the solo star for only 168 possessions and 80 minutes. The Bucks have scored 194 points in those 80 minutes (116.4 Pts/48) a 114.3 ORTG while allowing 191 (114.6 PTS/48) a 112 DRTG. The Jrue solo star minutes have a net rating 15 points higher than the Khris solo star minutes. Therefore, the case for Jrue can be summarized by saying: Jrue (a) better fits with the Bucks bench, (b) is a point guard so he can lead the offense adequately, and (c) has performed well enough this year to warrant this role (+2.2 Net Rating). There is a third option though: neither.

The Case for Neither.
Throughout this exercise, I was working under the premise that the Bucks would need to fill minutes with Giannis and one other player resting. I was comfortable with that premise because the Bucks only had two stars last year, so you did have to figure out what to do while they rested. But now that they have three stars, the best option may be to operate under a stagger system in which you play one of these three groupings: (1) Giannis+Jrue+Khris, (2) Giannis without any help, and (3) Jrue+Khris.

In the playoffs, you could alter your rotations just slightly to have the big three play 28 minutes together, Giannis by himself play 10 minutes and Khris and Jrue play together for the other 10 minutes. That gives each of the three stars 38 minutes and you cover the entire game.

Conclusion
Through this point in the season, Bud has been turning to Khris and Giannis to operate as the solo star for significant stretches of the game. Giannis has been excelling in that role, Khris has not. Khris was really good in that spot last year, though, and his offensive abilities give him a strong case for maintaining that role. However, the bucks added a third star in the off season, Jrue Holiday. In the limited opportunities he has been given to operate as the solo star, he has outperformed Khris Middleton. His defensive attributes may better match this season's roster. But ultimately the answer to the question posed in this post is actually be that neither Jrue NOR Middleton should operate as the solo star. Instead, the Bucks should use Giannis in that position and the two headed monster of the Bucks second and third best players as Giannis's staggering partner.